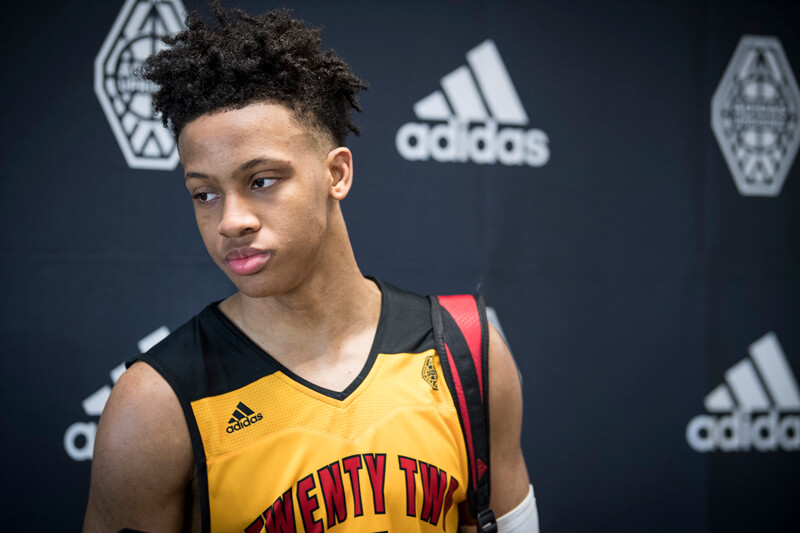 Here’s our spring recap of how each of IU’s recruiting targets in the class of 2018 performed statistically on the Gauntlet circuit through two sessions. The adidas Gauntlet circuit will conclude in July in Spartanburg, South Carolina:

(Special thanks to Open Analytics for several advanced statistics referenced in this story.)

Phinisee is using a team-high 26.9 percent of Indiana Elite’s possession with an effective field goal percentage of 40. His assist rate of 20.4 leads the team. Phinisee has the second best defensive rebounding percentage on Indiana Elite’s roster at 13.5.

His usage rate of 32.6 percent was by far the highest on Twenty-Two Vision and he owns an effective field goal percentage of 47.7. Langford is shooting 58.7 percent on 2s, but over 42 percent of his shot attempts came from behind the 3-point line.

He did a terrific job of drawing fouls with a free throw rate (FTA/FGA) of 56.9 percent.

· Race Thompson, D1 Minnesota (5-3): Thompson recently added a scholarship offer from the Hoosiers after averaging 14.4 points, 6.9 rebounds and 2.1 assists in 26.8 minutes per game this spring on the Gauntlet circuit.

He also owns a strong block percentage (3.8) and has a turnover percentage of just 11. Through two Gauntlet sessions, efficiency has been a staple of Thompson’s game.

Carmody is shooting 44.1 percent overall from the field, 35.5 percent on 3s and 79.5 percent from the free throw line. He’s using 29.5 percent of OBC’s possessions and owns an effective field goal percentage of 57.6.

He’s also been solid on the defensive glass (13.7 DR%) and owns a steal percentage of 3.3. Known as a shooting, it shouldn’t be surprising that 58 percent of Carmody’s field goal attempts on the circuit have been 3-pointers.

· Luguentz Dort, Brookwood Elite (5-3): Dort has been a standout through two Gauntlet sessions with averages of 21 points, 4.9 rebounds and 1.8 assists in 27.1 minutes per game. He added an Indiana scholarship offer in early May.

Dort is using a team-high 32.7 percent of possessions for Brookwood Elite and has a very solid 55.1 effective field goal percentage. He also has a free throw rate (FTA/FGA) close to 50 percent and is knocking down close to 70 percent of his attempts from the foul line.

The Canada native is now ranked the No. 12 prospect by 247Sports and is expected to move up significantly in the 247Composite when the other national services update their rankings.