The Minute After: Georgia Tech 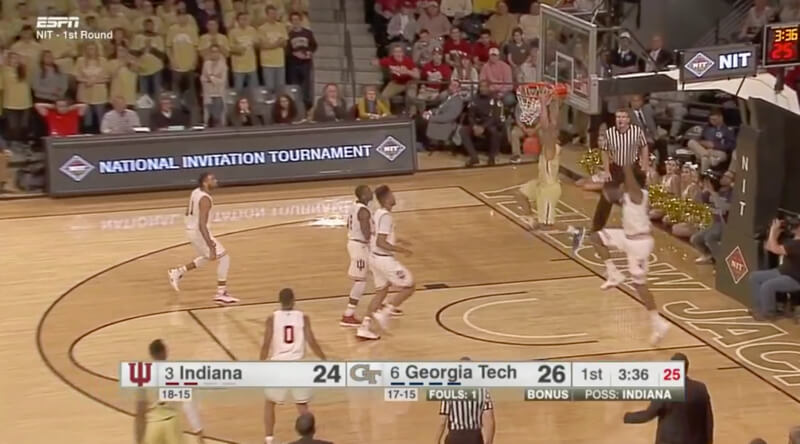 All those months ago, coming back from Hawaii on a high from the Kansas win, the Hoosiers stopped in Phoenix en route back to Bloomington.

“We wouldn’t mind coming back here sometime,” the team’s official Twitter account hinted about the site of this season’s Final Four. “Hear it’s nice in April.”

But the Hoosiers won’t make it to April, didn’t even make it to the NCAA Tournament. No, Indiana’s season ends with a whimper in the first round of the NIT, playing on the road by choice. The administration chose to duck the Hoosiers playing in front of their fans, ones that helped spur them on to a 26-game home winning streak that went all the way into late December earlier this season.

This was a season that changed in the most drastic of ways and leaves a frustrated fanbase wondering what the heck happens next.

Indiana turned the ball over on 22.9 percent of its possession tonight, just a bit over its season average of 21.4 — which is 322nd in the country. Georgia Tech turned those turnovers — a number of which came in the second half as the game got away from the Hoosiers for good — into 22 points. That was nearly 30 percent (29.3) of the Yellow Jackets’ points tonight. Indiana had more issues than just turnovers this season. Lack of leadership. Ho-hum defense. Free throw discrepancies. Injuries.

But its inability to take care of the ball with the fundamentals — the easy pass, dribbling instead of shuffling to avoid the travel — was perhaps the defining characteristic of this team. Indiana’s offense was pretty dang good when it could get through a possession without giving the ball away, but it didn’t happen enough this year. And tonight even when Indiana wasn’t turning it over, its offense had trouble against Georgia Tech’s zone.

Indiana failed to even hit 1.0 points per possession (.90) this evening and shot an effective field goal percentage of 42.2. The Hoosiers hit just 5-of-19 (26.3 percent) from 3-point range. Robert Johnson made only one field goal in eight attempts.

Credit due to Georgia Tech. Despite their faults, the Yellow Jackets came to play and remained engaged throughout the contest, not always an easy feat in the NIT. ACC Defensive Player of the Year Ben Lammers had five blocks. At one point in the closing minute of the contest, he shut out Thomas Bryant twice in a row, though the second block wasn’t recorded in the box score because the shot clock expired on Bryant’s attempt.

Josh Pastner didn’t let the gift of a home game Indiana gave him go to waste, as he paid for any student that wanted to show up. Show up they did. The crowd was loud and into it. After the game, Pastner called it “money well spent.”

Too often this season, the Hoosiers self-inflicted their wounds. And in games they had a chance, they more often that not failed to make the plays down the stretch to pull out the victory.

So Indiana ends the year 18-16 overall and with a record of just 2-11 vs. teams in the KenPom Top 50, an unfathomable finish compared to its start all those months ago.