What to watch for: Indiana vs. Wisconsin 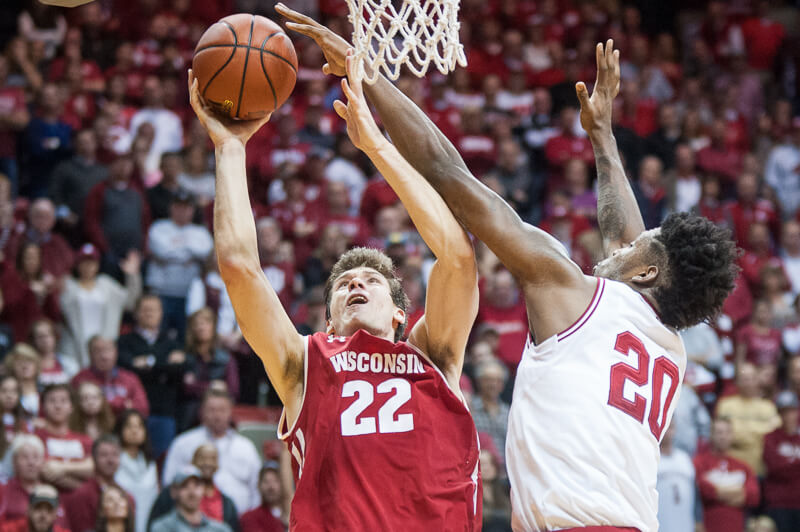 WASHINGTON – After Thursday night’s 95-73 trouncing of Iowa, Indiana will take on Wisconsin on Friday evening in the quarterfinals of the 2017 Big Ten tournament at the Verizon Center.

Wisconsin won the first two meetings this season between the two teams with a seven-point victory in Bloomington on Jan. 3 and a five-point win in Madison on Feb. 5.

The game will tip at 6:30 p.m. ET on BTN with Brian Anderson, Bill Raftery and Mike Hall on the call. Here’s a look at three key storylines in tonights game:

· How will Indiana handle Ethan Happ? The Hoosiers were unable to contain Happ in the first two meetings and the All-Big Ten redshirt sophomore was a major factor in both Wisconsin wins.

In Bloomington, Happ went 8-of-11 and 3-of-4 from the free throw line and finished with 19 points, six rebounds and four assists in a 75-68 win. The story wasn’t much different in Madison as Happ was 8-of-10 from the field and 4-of-7 from the line on his way to a final line of 20 points, seven rebounds, three blocks, three steals and two assists.

Indiana did an excellent job of avoiding foul trouble in Thursday’s win over Iowa, but the Hoosiers have owned the league’s worst opponent free throw rate all season. Will Thomas Bryant, De’Ron Davis and Juwan Morgan be able to defend Happ without fouling?

One thing to note is Happ is coming off his worst stretch of play this season. Over Wisconsin’s last four games, which includes three losses, he’s averaging just eight points per game and is 2-of-14 from the free throw line.

· Can Indiana get out in transition and take care of the ball? Over its last two games, Indiana has 189 points in 150 possessions. Those numbers, however, came against a pair of teams who had no problem getting into an up-and-down game in Ohio State and Iowa.

That won’t be the case with Wisconsin, which limited Indiana to 61 possessions in Bloomington and 63 in Madison.

The Hoosiers started strong in the win over Iowa in terms of taking care of the ball, but regressed as the game went on. It didn’t matter much because of a 12-of-20 performance from behind the 3-point line. It’s not realistic to expect another shooting performance like that on Friday night against the Big Ten’s best defense.

For Indiana to be successful, the Hoosiers need to be smart with decision making, particularly when trying to run. Possessions are likely to be at a premium with Wisconsin’s ability to force a halfcourt game. The Badgers are also the Big Ten’s best in terms of forcing turnovers, which is an Achilles’ heel for Indiana.

· Will Indiana find its perimeter stroke against the Badgers? Indiana has broken out of its shooting slump in recent weeks, but Friday presents a significant challenge in that regard.

In two games against Wisconsin this season, Indiana is just 12-of-35 on 3-pointers. What makes those numbers interesting is that despite its status as the Big Ten’s best 2-point field goal defense, the Badgers are just 13th in 3-point field goal percentage defense.

Over its last eight games, Wisconsin has held just one team – Minnesota – below 39 percent shooting from beyond the 3-point line. And in that stretch, Wisconsin is just 3-5 including losses to Northwestern, Michigan, Ohio State, Michigan State and Iowa.