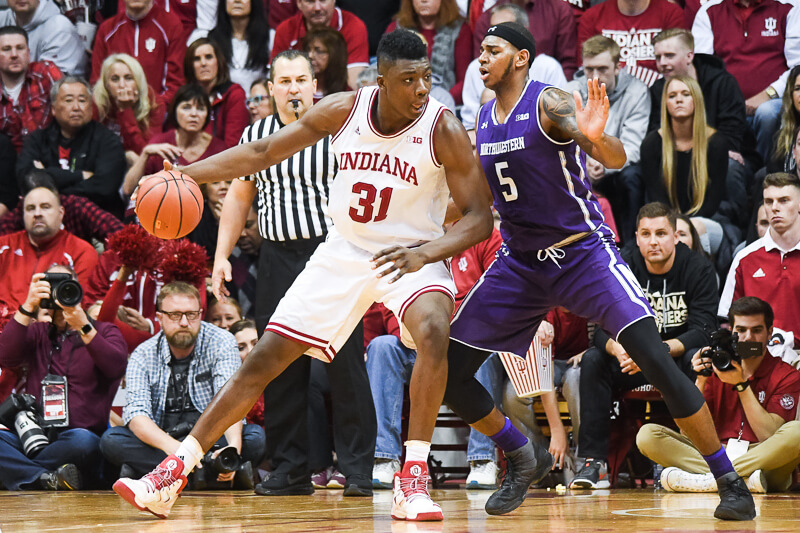 The penultimate week of Big Ten play had more than its fair share of chaos. The top four teams heading into the week went a combined 1-7, while the three squads right behind them (Minnesota, Michigan, Michigan State) each posted perfect 2-0 records.

As peculiar as the race at the top is, the standings at the bottom of the conference may be even more so, with there currently being a four-way tie for 10th place.

Each game this week will have some level of significance for the final standings, as the only team locked into its seed for the Big Ten Tournament is lowly Rutgers. As a result, this week’s rankings include the range of seeding possibilities for each team.

Here’s a look at where each team stands with one week remaining in conference play:

Locked into No. 14 seed for Big Ten Tournament.

After downing Penn State on Feb. 4 to win their first road game since joining the Big Ten, the Scarlet Knights have lost five straight. All but one of those losses have come by single digits (Purdue was the exception). It’s a sign of progress, but Steve Pikiell’s squad is going to have to wait another year to get out of the cellar.

Highest possible seed: 8 (would win 3-way tiebreak with Iowa and Penn State if all finished 8-10)

With the middle as bunched up as it is, a winless week can send you tumbling five spots in the power rankings. That’s exactly what happened to the Huskers, who lost to Michigan State and Illinois by a combined 32 points.

Highest possible seed: 8 (would win 3-way tiebreak with Illinois and Iowa if all finished 8-10)

The Nittany Lions nearly pulled off a win over the Boilermakers on Tuesday, but an inability to hit shots down the stretch once again did them in. Their schedule eases considerably for the final week with contests against Ohio State and at Iowa.

Lowest possible seed: 13 (possible to finish 13th no matter their record over final two games, but are more likely to end up 13th if they go 0-2)

Tom Crean’s club finally ended a five-game skid in miraculous fashion, coming back from an eight-point deficit with 3:11 remaining to pull past Northwestern. The Hoosiers will need to find a way to continue that momentum as they head to West Lafayette on Tuesday.

Note: Zach Osterman of the Indianapolis Star has compiled a complete list of IU’s seeding possibilities.

Highest possible seed: 9 (if tied with Iowa or in a 3-way tiebreak with those two plus Nebraska at 8-10)

Lowest possible seed: 13 (possible to finish 13th no matter their record over final two games, but are far more likely to end up 13th if they go 0-2)

Somehow, a Buckeye team that began conference play 0-4 has an outside shot at a 20-win season after pulling off an upset over Wisconsin. An NCAA bid is still a pipe dream, but the Buckeyes have plenty to play for.

Highest possible seed: 7 (would win tiebreak with Northwestern if both finish 9-9)

What has gotten into John Groce’s team? The Fighting Illini have suddenly won three games in a row. Last week was the most successful of the season for Illini, beginning with a win over in-state rival Northwestern to sweep the season series. On Sunday night, Illinois demolished Nebraska in Lincoln.

Highest possible seed: 5 (would win 3-way tiebreak with Maryland and Michigan at 10-8)

The Hawkeyes are now back to .500 in conference play after picking up two impressive victories over Indiana and Maryland. If Iowa can win one of their final two games (at Wisconsin, vs. Penn State), they’ll finish conference play at .500 or above for the fifth straight season under Fran McCaffery.

Highest possible seed: 3 (would win 3-way tiebreak with Wisconsin and Maryland at 11-7)

Northwestern is still searching for that elusive 21st win on the season, which would set a program record. The Wildcats have lost five of their last seven, and the final week won’t get any easier. They’ll be at home for each of their final two games, but with Michigan and Purdue as the opponents, the Wildcats will be hard-pressed to pick up a win. An NCAA berth, seemingly a lock after a win over Wisconsin, could be on shaky ground.

Lowest possible seed: 7 (Maryland finishes 10-8 and falls to 7th due to tiebreakers)

The Terrapins are in a tailspin, having lost their last three contests. After starting the conference slate 8-1, Maryland may have to end their campaign 2-0 just to secure a double-bye.

Highest possible seed: 2 (best chance at a 2 seed is by finishing season 12-6. If 11-7, would need to get help from the teams ahead of them)

Lowest possible seed: 7 (Spartans lose their final two games and lose one of several tiebreaker scenarios of teams with 10-8 records)

Like clockwork, Tom Izzo’s Spartans have begun to find their rhythm as March approaches. On Sunday, Michigan State put up a ridiculous 1.2 PPP on Wisconsin at Breslin Center, giving them their sixth win in their last eight games. The senior night triumph ended in emotional fashion, with the injured Eron Harris entering the game.

Highest possible seed: 3 (must win each of their final two games, have Wisconsin beat Minnesota, and Rutgers defeat Maryland, among other results)

Lowest possible seed: 9 (finish 9-9 and fall to 9 by virtue of losing one of several tiebreaker scenarios)

Behind 22 first half points from Moritz Wagner, Michigan finally picked up the signature win it’s been searching for, dispatching Purdue on Saturday. One more victory and John Beilein will have his sixth 20 win season in his last seven years at the helm of the Wolverines.

Highest possible seed: 1 (must win each of their last two games, Purdue must lose their final two, and several other things must break right)

Lowest possible seed: 7 (if lose their final two games, could fall to 7 due to tiebreaker scenarios)

The Gophers are flourishing, having won seven straight. Coach Richard Pitino, on shaking ground after a tumultuous 2016-17 campaign, is now in the running for Big Ten Coach of the Year. Minnesota even has an outside shot at earning a share of the Big Ten title.

Highest possible seed: 1 (must win their final two games and have Purdue lose their final two to earn the 1 seed, among other results, since Purdue holds the tiebreaker)

Lowest possible seed: 6 (lose their final two and end up in one of several tiebreaker scenarios)

In complete control of its own destiny in the Big Ten race just a few weeks ago, the Badgers will have to hope for a Boilermaker slip up if they want to earn even a share of the conference crown. Last week was Wisconsin’s worst of the season, as they lost road games to Ohio State and Michigan State by a combined 20 points. They’ll have a chance to right the ship this week with home contests against Iowa and Minnesota.

Highest possible seed: 1 (win at least one of their final two games or finish 0-2 and get some help)

Lowest possible seed: 2 (lose final two games and end up in a tiebreaker with Minnesota at 12-6 or have Wisconsin go 2-0)

Purdue’s defense was sliced into pieces Saturday, as the Boilermakers gave up 1.26 PPP to Michigan on 55 percent shooting. Even with the loss to Michigan, the Boilermakers need just one win in their final two to secure at least a share of the Big Ten title. The first opportunity comes at home Tuesday against arch-rival Indiana. The Purdue faithful have been waiting a long time for this one, as the two haven’t faced off at Mackey since Jan. 28, 2015. 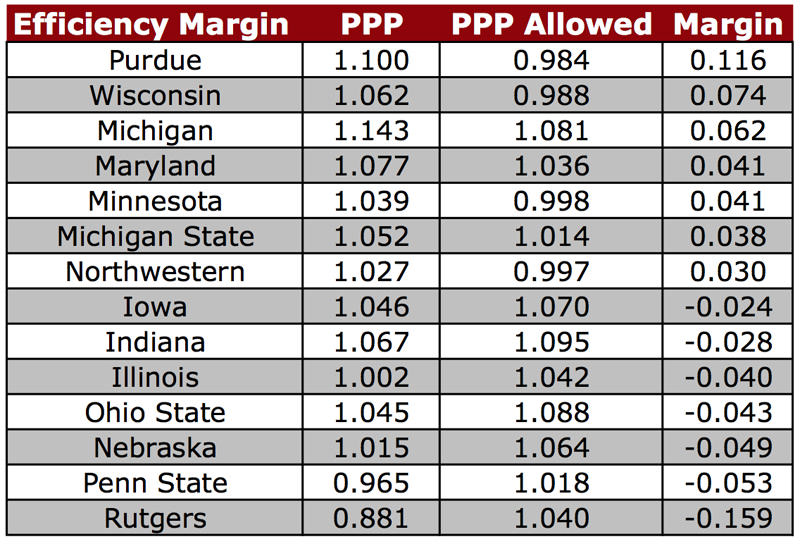