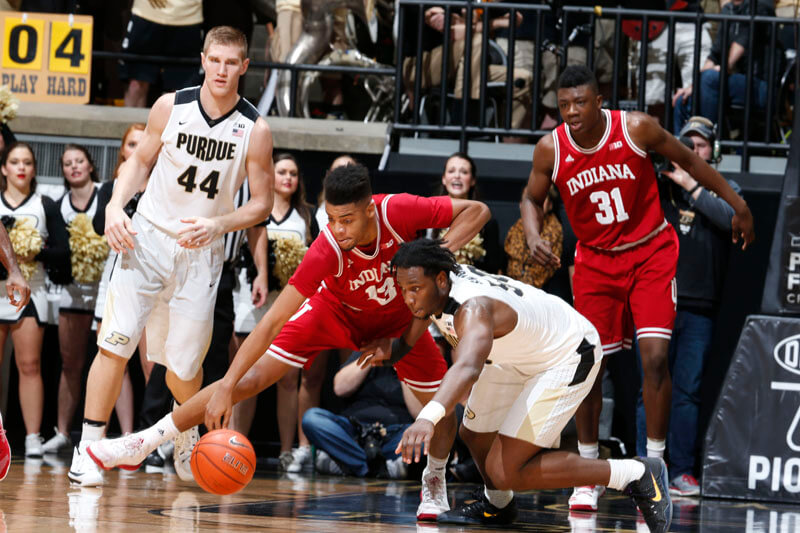 How it happened: Purdue clinched at least a share of the Big Ten regular season title on Tuesday night in a contest that wasn’t unlike many of Indiana’s road losses. The Hoosiers again struggled to take care of the ball and were beaten badly at the free throw line. It’s been a theme all season. Indiana committed 14 turnovers, which Purdue converted to 14 points. (IU also scored 14 points off of Purdue’s 10 turnovers.) And the Hoosiers didn’t shoot a free throw until the second half as the Boilermakers outscored them by 15 at the line. At times, Indiana made things interesting, but never seriously threatened in the second half. A Tim Priller jump hook cut the deficit to six with 10:09 to play, but Purdue quickly stretched the lead to 11 and cruised from there. The loss, Indiana’s sixth in its last seven, drops the Hoosiers to 16-14 overall and 6-11 in the league with the regular season finale looming at Ohio State on Saturday afternoon.

Standout performer: Freshman Devonte Green was the only Hoosier to finish in positive territory in the plus/minus at +11. Green had 13 points, three rebounds and two steals in 25 minutes. Priller, forced into action because of foul trouble for De’Ron Davis and Thomas Bryant, had a career-high six points.

Statistic that stands out: Indiana was outscored by 15 points at the free throw line. In eight Big Ten road games, the Hoosiers have been outscored by 94 at the line.