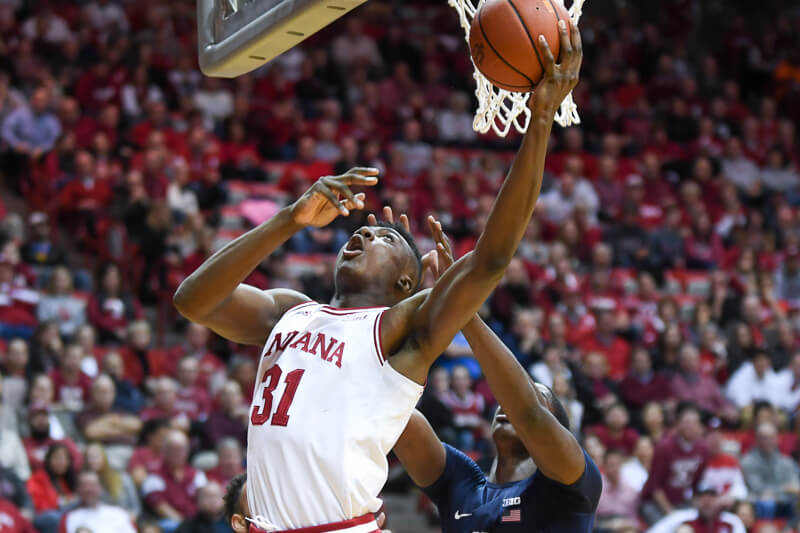 How it happened: It was a marathon at Simon Skjodt Assembly Hall on Wednesday night. Indiana needed three overtimes, but the Hoosiers avoided disaster to beat Penn State. After leading by 13 in the first half, Indiana allowed Penn State to come all of the way back and needed a pair of De’Ron Davis free throws late in regulation to send the game into overtime. And then in the first overtime, Josh Newkirk’s buzzer-beater forced a second overtime. The end of the second overtime came down to an Indiana possession with just over five seconds left, but Devonte Green’s shot fell short. Indiana then finally took control in the final overtime to pull out its 15th win of the season and fifth in Big Ten play. It wasn’t pretty, but in a game Indiana absolutely couldn’t afford to lose, it prevailed.

Standout performance: Three Indiana players carried the load offensively. Thomas Bryant, Robert Johnson and Josh Newkirk. Bryant finished with a career-high 31 points and 11 rebounds before fouling out in the third overtime. Johnson had 27 points, also a career-high, and 10 rebounds. Johnson played 50 minutes. Newkirk also had a career-high with 27 points and hit 4-of-8 from behind the 3-point line.

Statistic(s) that stands out: Indiana dominated the points in the paint battle, outscoring Penn State 66-40. But the Hoosiers committed 23 turnovers that led to 29 points for the Nittany Lions.