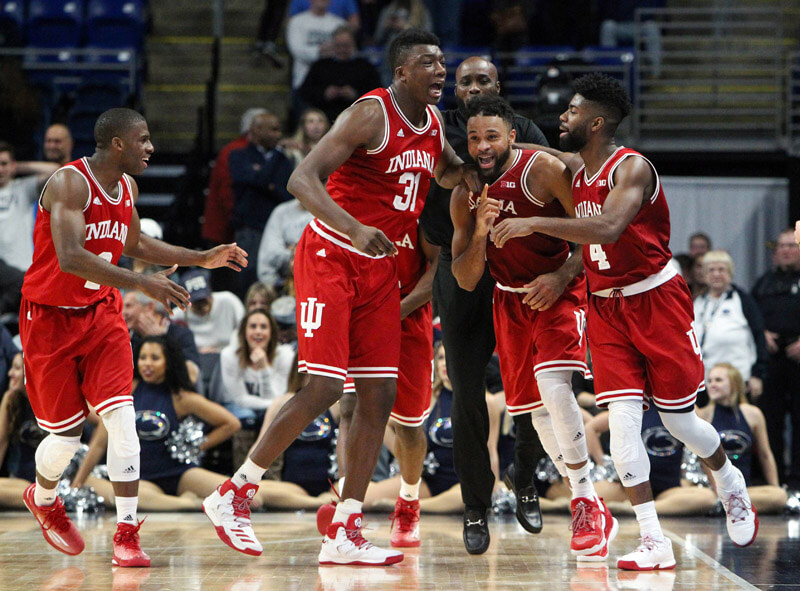 STATE COLLEGE, Pa. — What for most of the second half looked like it was going to be easy for Indiana, had — in the final minutes — turned into a difficult and dramatic task: winning on the road shorthanded.

With 4.6 seconds left the Hoosiers were well on their way to a demoralizing collapse without two key contributors, OG Anunoby and Juwan Morgan.

Penn State’s Lamar Stevens had just made two free throws, and the Nittany Lions (11-8, 3-3 Big Ten) had come from 13 points behind in the final five minutes to tie the game at 75.

Then the Hoosiers (13-6, 3-3 Big Ten), who had given up a 13-point lead in the final 4:37, quickly advanced the ball up the court and James Blackmon Jr. hit a buzzer beating three from the corner.

The Hoosiers had escaped Happy Valley with a 78-75 win. They had narrowly escaped a major debacle on the road.

“[Blackmon] just did it flawless,” Indiana coach Tom Crean said. “A lot of times what happens in those situations when you are taking a shot at the end of a clock or at the end of a game it is easy not to take a fundamental shot.”

Blackmon talked about how well the Hoosiers carried out the play well before the ball left his hand.

“Really just execution on the play by everybody,” Blackmon said. “Rob (Johnson) made a great inbounds pass, led me. Then Thomas set a great screen and then they said just shoot it how you do in practice and that’s what I did… It felt great to get to get a tough road win in a tough conference.”

Shortly after the Hoosiers walked into the Bryce Jordan Center for Wednesday night’s game against the Lions, it became clear they would be missing at least one starter in Morgan.

As Morgan, who was previously listed as a game time decision, watched warmups with a walking boot on everyone knew the Hoosiers would be shorthanded for the night. Then in the final seconds of the first half the injury situation got even bleaker as Anunoby went down with an apparent knee injury. He did not return and Crean did not have an update on his status after the game.

“We talked through as much as he knew,” Crean said. “Our biggest concern right now is making sure that doctor, trainer do everything that we can do at this point. Get him home and figure it out.”

Anunoby’s injury came at the end of an opening 20 minutes that the Lions led in the early parts of, but ended with the Hoosiers on top 44-37.

Without Anunoby and Morgan out, and the Hoosiers making a habit of turning the ball over in the opening minutes of the second half, it looked like the Lions were going to tighten the game up. Instead the Hoosiers pulled away and grew the lead out to 14 points by the midway point of the second half before allowing the Lions back in it which provided for the late dramatics.

“We just know that we all had to step up, as a collective group,” Thomas Bryant said. “When one of our guys goes down, all of us step up even more.”

With so many players making key contributions, Crean felt that the young Hoosiers grew up on a demanding night in the Bryce Jordan Center.

“Jayd Grossman told me this morning that we’ve got the third youngest team in the Big Ten, it was a little bit younger tonight,” Crean said. “But they definitely grew up. It wasn’t easy but they earned this victory. It would have been a shame if we hadn’t gotten this win, because they earned it.”

The Hoosiers are trying to take the win and turn it into more. Before the season started expectations were high in Bloomington. But then the Hoosiers got off to a 2-3 start in conference play and slipped out of the top-25. They hope Wednesday’s win can be a springboard for the rest of the season.

“We always like a game winner,” Bryant said. “But we are going to look forward to the next step. Just go to the film and learn what we can learn from this game, we’ve got to keep improving each and every day. Really just build on this game, hopefully it carries us with a little bit of momentum.”