At the Buzzer: Louisville 77, Indiana 62 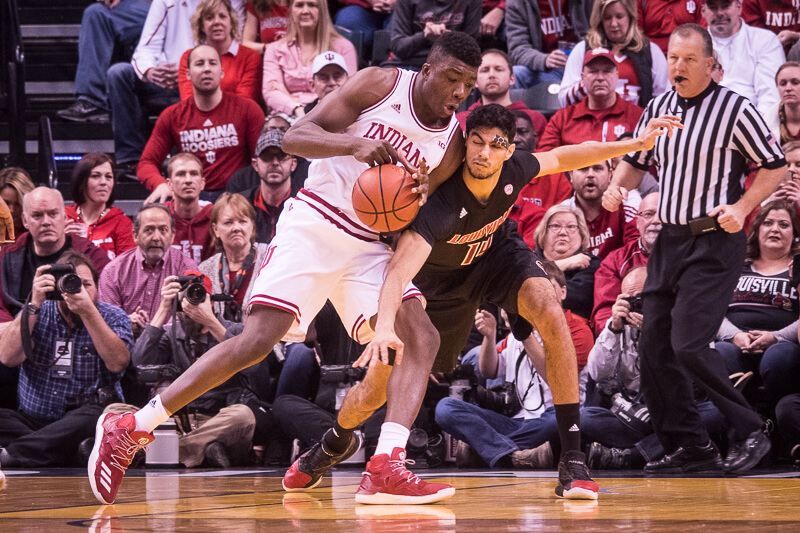 INDIANAPOLIS – Quick thoughts on a 77-62 loss to Louisville:

How it happened: Indiana’s second trip to Bankers Life Fieldhouse this season and third this calendar year ended with a familiar result: a loss. Turnovers and poor shooting doomed the Hoosiers in the first half. Indiana posted an effective field goal percentage of 29.3 in the first half and a turnover percentage of 30.7. Against a legitimate top 15 opponent, that’s not going to get it done. The second half brought some promise for the Hoosiers as they got within six with 12:20 to play, but a subsequent Donovan Mitchell 3-pointer pushed the lead back to nine. Indiana never really threatened again from there. The loss, IU’s second straight, drops the Hoosiers to 10-4 on the season with a conference showdown with Wisconsin looming on Tuesday in Bloomington.

Standout performances: James Blackmon Jr. finished with 10 points and 11 rebounds, but shot just 3-of-8 from the field. And sophomore OG Anunoby played well at times, finishing with 14 points on 6-of-10 shooting.

Statistic that stands out: It was another lackluster effort from Indiana defensively as the Hoosiers allowed the Cardinals to score 1.17 points per possession. Fourteen games into the season, Indiana’s defense is clearly trending in the wrong direction. Donovan Mitchell scored a career-high 25 points for the Cardinals.