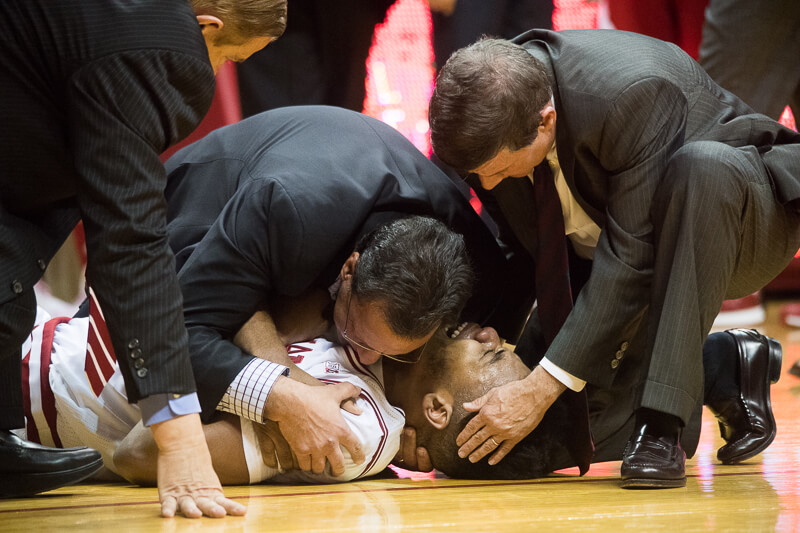 No room for excuses tonight because the reality is this: Nebraska outplayed Indiana. The Cornhuskers deserved the victory. This is a Nebraska team that entered the contest with the worst offense in the Big Ten, one with just the 313th ranked eFG% in the country. One that lost to Gardner Webb at home a mere 10 days ago and entered the contest just 6-6. One that KenPom gave just a nine percent chance of emerging victorious.

During its 26-game home winning streak, the Hoosiers beat some of the nation’s very best teams. But tonight the streak ends against a middling Cornhusker squad it had no business losing to.

Instead of a comfortable win and a 1-0 start to conference, this is a bad, frustrating loss and Saturday brings no relief. Louisville, currently the top defensive squad in the country, looms. Happy New Year, Hoosier Nation.

So what the heck happened? There’s the glaringly obvious in the turnover department. Indiana turned the ball over on 26.2 percent of its possessions (19 turnovers). Many came from poor passes, bad decisions and silly mistakes. Self infliction was the Hoosiers’ M.O. tonight. Nebraska had 13 freaking steals in this game. Against a team like the Cornhuskers, Indiana, though not ideal, can survive giving the ball away on over a quarter of its possessions. Especially in a home contest.

But when you couple Indiana wasting away that many possessions with a lackluster defensive performance? It’s how you end up losing to a team of this caliber. Early on, Indiana couldn’t stop Tai Webster. He dribbled penetrated with ease. Indiana ended up having to resort to a zone in both the first and second half to try and slow it down. Nebraska came into the contest as one of the worst 3-point shooting teams in the country at 29 percent. The Cornhuskers left Assembly Hall hitting 50 percent (9-of-18) from downtown. Did they hit a few tough ones? Sure. But Indiana also had trouble sticking with shooters and Nebraska got a lot of wide open looks that it converted. The Hoosiers also played poor transition defense off their turnovers at times and Nebraska turned their miscues into 21 points. The Cornhuskers also had 40 points in the paint and scored a season-high 1.2 points per possession.

Still, despite the above disasters, Indiana had plenty of chances to win this one.

But it seemed like whenever the Hoosiers opened up a road to victory in the second half, somebody grabbed the wheel and drove the team into a ditch. Thomas Bryant tried dribbling the ball up the court on the break and the ball was promptly stolen. OG Anunoby took a seriously horrific deep 3 with plenty of time on the shot clock left. The Hoosiers were lucky to retain possession, one where Devonte Green promptly threw a bad pass to Anunoby for a turnover. Robert Johnson was one of the few bright spots tonight, but he picked up his fourth foul early in the second half and what was left on the court was a team that couldn’t right itself on either end of the court.

Perhaps most upsetting for fans in this one is that Indiana didn’t come out with a killer instinct and let the Cornhuskers dictate the terms from the opening tip. It was the final nail in the coffin for tonight’s contest.

“We didn’t come out with the right mindset,” Robert Johnson said after the game.

Now, lest we forget: This is but one game. A bad, horrible game, yes. But just one game. This is still a team with wins against Kansas and North Carolina and one that can go a long way towards sowing up wounds of this loss with a win over Louisville on Saturday.

But tonight’s loss perhaps solidifies Indiana’s reality even stronger. The Hoosiers can play with any team in the country, but can get upset just as easily.