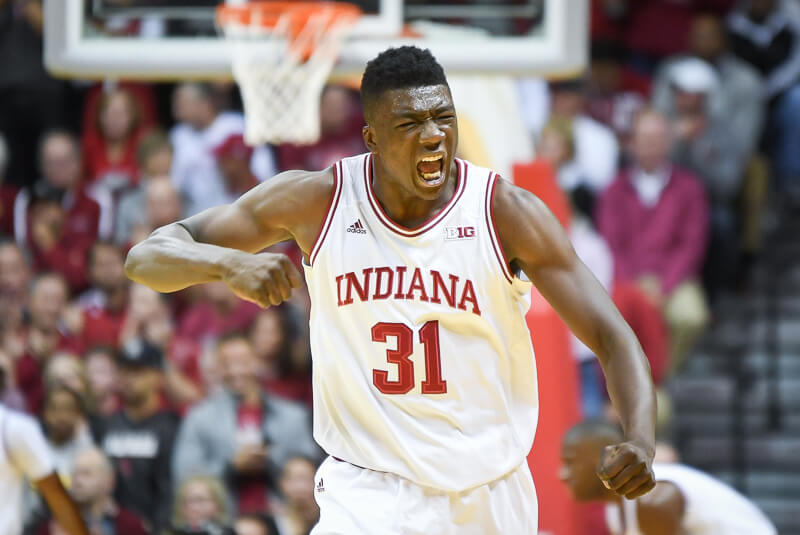 Indiana improved to 8-1 on Saturday afternoon with an easy 103-61 win over Houston Baptist at Simon Skjodt Assembly Hall.

Here’s a look at five takeaways from the win over the Huskies:

· Morgan sets record: There aren’t many moments worth remembering from a 42-point win, but sophomore Juwan Morgan had one on Saturday afternoon.

Early in the first half, Morgan set the program record for consecutive field goals made at 14. It was a streak that began in the North Carolina game and ended in the second half against Houston Baptist when Morgan missed a 3-pointer.

Morgan joked postgame about finally missing a shot that his “feet probably weren’t right.” Through nine games, Morgan has the 37th best offensive rating nationally, according to Ken Pomeroy, and is making close to 69 percent of his 2-point field goal attempts.

· McRoberts impressive again: Walk-on Zach McRoberts continues to prove himself capable of contributing against the lesser opponents on the team’s schedule.

McRoberts had four rebounds and two steals in 16 minutes against Houston Baptist, but did commit three fouls. However, the question with McRoberts is this: how much, if at all, will he play once the competition level picks up?

The Carmel product didn’t play against Kansas, committed four fouls in six minutes against North Carolina and has taken just seven shots in 90 minutes on the floor.

“(He’s) constantly in movement. That ball’s not in his hands very long,” Tom Crean said. “Certainly we need him to continue — he can really shoot the ball and he just hasn’t, he’s such a willing moving, such a willing passer, such a ball mover — and there will be some nights where he just knocks down shots. He does it in practice. And he’s really improved his shooting here, I think.”

· Jones continues solid freshman campaign: Curtis Jones generated plenty of discussion after his 15-point performance against Kansas in Hawaii, but didn’t score in double figures in the seven games that followed.

Jones posted his second game in double figures on Saturday against Houston Baptist with 11 points. And there’s plenty on his offensive profile that suggests he’s going to be a factor in Big Ten play.

· Bryant finding different ways to contribute: As Ryan pointed out in film session, opposing defenses are keying on Thomas Bryant much more this season.

But it hasn’t stopped Bryant from finding ways to make an impact. Against Houston Baptist, Bryant took just two shots, but got to the line eight times and finished with nine points. He also dominated on the glass with a game-high 13 rebounds and blocked four shots.

It’s early, but Bryant’s block percentage is up from 4.1 as a freshman to 6.6 this season, which ranks ninth in the Big Ten. Bryant’s improvement there is a major reason the Hoosiers currently rank in the top 50 nationally in block percentage.

· For a night, turnovers are no problem: Indiana had its lowest turnover game of the season on Saturday, committing just 12 for a turnover percentage of 15.9. It’s the first time this season that Indiana turned it over on less than 18 percent of its possessions.

Still, it’s an issue that bears watching over the coming weeks. Indiana wasn’t great at taking care of the ball last season, but the Hoosiers were under 20 percent for the season in turnover percentage at 19.6.

Through nine games this season, Indiana is sitting at 22.2 percent. While the difference isn’t huge, it could play a major factor down the road in a one or two possession game.