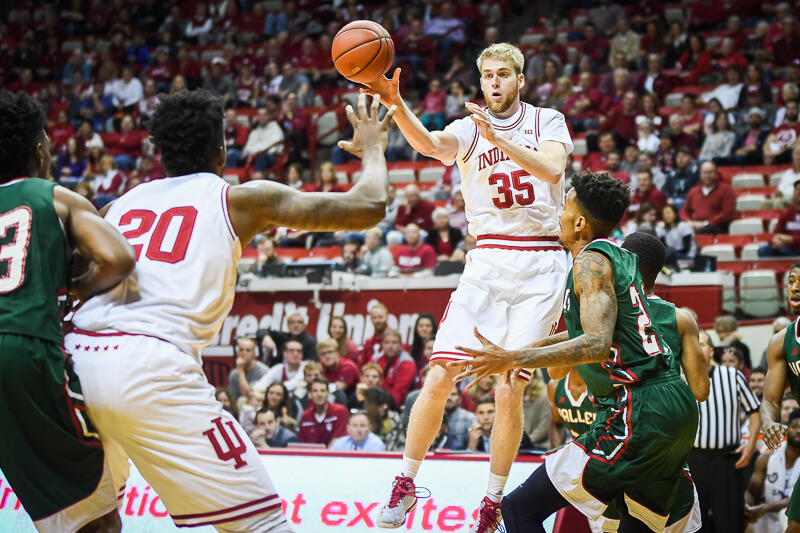 This one was billed as a game the Hoosiers would have little trouble winning. The Delta Devils rank near the bottom of Division I in Ken Pomeroy’s rankings. They’ve played a brutal seven-game road schedule to start the season coming into this afternoon’s contest, including a loss yesterday to Fort Wayne.

And save for a sleepy stretch in the first half — where Indiana failed on both sides of the ball and the Delta Devils cut a 17-point IU lead to just five — this one played out pretty much as expected with Indiana cruising to a 33-point victory. The Hoosiers really made their mark on the game at the start of the second half. They got back to what they do best on offense, pushing the pace in transition, spotting the open man and knocking down shots. A 14-2 run to start the final 20 minutes of the contest put the Hoosiers up 24 points (54-30) with 17:22 to go. That pretty much shut the door on the game.

Indiana’s defense did allow some dribble penetration at times and busted out a 2-3 zone again on occasion. Still, it was a dominant defensive performance, as the Hoosiers held the Delta Devils to just .74 points per possession. Indiana intimidated at the rim in the second half as Thomas Bryant (three blocks) and DeRon Davis (two blocks) swatted a number of shots. Zach McRoberts got the start and continued to show strong effort on defense and an ability to make the hustle play.

On offense in the first half, some stagnation carried over from the Fort Wayne loss. Indiana was taking 3s off little ball movement and defenders near, not in the flow of offensive sets where it had gained a true advantage over the defense. Those types of possessions also failed to get anything going in terms of dribble penetration. For the game, the Hoosiers shot 36 percent (9-of-25) from distance, better than the 29.2 percent they shot against Fort Wayne, but still not as high a percentage as we’ve come to expect from Indiana’s offense under Tom Crean.

Still, Indiana scored a solid 1.10 points per possession heading into halftime and that got better thanks to a strong offensive start to the second half with the Hoosiers ending the game scoring 1.21 points per trip.

The Hoosiers will get the early part of this week to prepare for North Carolina at home on Wednesday in the Big Ten/ACC Challenge. The Tar Heels are coming off a dominant win over Wisconsin in the Maui Invitational championship game and look very much like a team with the tools necessary to make a deep run in March. The same was being said about the Hoosiers after their victory over Kansas, but their loss to Fort Wayne has allowed some doubt to creep in on that.

Tom Crean teams have traditionally been very good at home against ranked opponents and the atmosphere should be great in Assembly Hall. But if Indiana doesn’t bring its A-game on both sides of the ball, its 20-straight home winning streak will be very much in jeopardy.