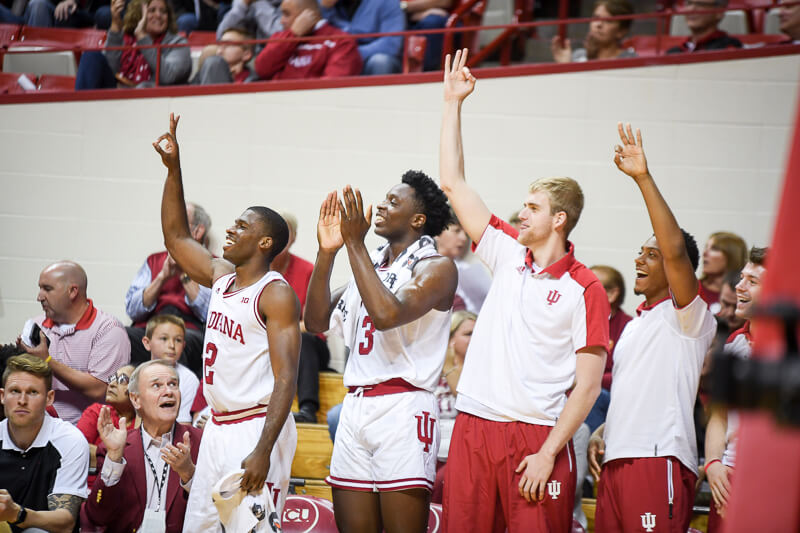 ESPN college basketball analyst Jay Bilas was available Monday afternoon to preview the 2016-2017 college basketball season on a conference call with media. Bilas will be a part of ESPN’s coverage of the Armed Forces Classic this Friday featuring Arizona vs. Michigan State and Indiana vs. Kansas. .

Here’s verbatim of what Bilas had to say about Indiana, Kansas, the Big Ten race, OG Anunoby and much more:

On what Bilas will be looking for out of Kansas on Friday:

“I don’t think it’s going to be anything different than we’ve seen since Bill Self has been there. They’re going to win the Big 12 and they’re going to be one of the top teams in the country and have a chance to win the whole thing. It’s a little bit different of a Kansas team than we’re used to because they’re not inside-oriented first or necessarily going to play inside-out. I think they’ll have times where they play a smaller lineup and can go kind of small ball where they spread the floor, take driving opportunities.

“But their guards are really good and experienced. Frank Mason and Devonte Graham are two of the best guards in the country and two point guards that play together really well. And then (Josh) Jackson gives them some incredible versatility. I haven’t seen him in practice yet, but I’m told he’s shooting the ball better than they expected. That was the knock on him coming out of high school that he could do everything but shoot. If he’s making perimeter shots, it makes him that much more of a threat. A lot is going to be determined for Kansas on how their inside guys come along. The primary guy I think who has to play really well is Carlton Bragg. If he can play 25 minutes a game at a high level, you’re looking at another championship contender in my judgement.”

On how much stock Bilas put into early season matchups and also the Indiana-Kansas matchup:

“I think you have to take it with a grain of salt. There are times when the travel can make things really difficult and maybe a team doesn’t perform at it’s optimum level. There are other times when you see a team play unbelievably well early in the season and then they fall off later on. And the flip side of that, too, you see a team that doesn’t perform as well and then they kind of get their act together.

“Indiana is a good example of that. Indiana last year got lost early on in Maui, then got their doors blown off in the ACC-Big Ten and then they won the Big Ten. A lot of people had them dead and buried before we got to December and it clearly wasn’t the case. I think those things happen in every sport.

“I’ve seen Indiana play their exhibition games. I watched a little bit of tape of Kansas. Kansas looked a lot better in their last exhibition than they did in their first. I think Indiana, the thing you have to deal with when you play Indiana is the speed of their offense. They get the ball up and down the court really quickly. They keep the floor spread. They’re a very good cutting and passing team. I don’t think that Indiana can afford to turn it over against Kansas. The thing where Kansas has a major advantage is the experience with their guards. They bring back Devonte Graham and Frank Mason. I’m not sure who has got more experienced guards. Two point guards in the backcourt. Josh Jackson is a star. A tremendous amount of talent will be on the floor in the Kansas-Indiana game and to have those two powerhouse college basketball brands squaring off against each other will be incredible.”

On the growth of hybrid and versatile players like OG Anunoby in college basketball:

“I think it’s just the way the game has gone generally. The NBA is doing it and has done it for some time now where you have players that are more versatile. With the way basketball is being played now with the 3-point line being valued so much and the game really going toward spacing and opening up the middle to where you can get up more 3s, but the other part is, you can get more drives to the basket. More teams are making use of transition to get a quicker shot in transition and also they’re making use of the width of the court. When you have guys who can guard in space, you mentioned OG Anunoby from Indiana, he can guard multiple positions. You can put him on a point guard, you can put him on a four-man. With his ability to cover ground and take away a shot and take away a drive, that’s all great and stuff you talk about with young players in close out drills, but there aren’t many guys who can do that. He can do that. He can guard a point guard and you can put him on four man with his length to cover ground and take away a shot. So you have to have a combination of speed and athleticism and mobility. Having those guys that can do that is incredibly valuable.

“One thing that Anunoby has done is he’s shooting the ball now. I watched him play recently and he has really become a capable shooter to where he can make five 3s in a game. That stretches out a defense and makes it easier to attack. We talk about spacing a lot, and rightfully so, it’s important. But an offense can space out all it wants to, but if they can’t shoot, the defense won’t go with them. The key is, can you stretch the defense, not so much can you space your offense. If you stretch the defense, then you’ve really got some cutting opportunities, driving opportunities. And I think Indiana does as good of a job as anybody with their offense. It’s really a fabulous offense to watch.”

On the Big Ten this season:

“The top guys that I can think of off the top of my head, I’d put Nigel Hayes of Wisconsin and Thomas Bryant of Indiana up there on the returnee side. Well, you put Melo Trimble up there, too. I would.

“I think it’s between Wisconsin, Indiana and Michigan State for the top spot. Purdue could sneak in there as well. But, those three. I don’t think there is anybody that is the no-brainer top pick. I thought Michigan State was the best team last year. They wound up not winning the league. But I thought they were the best team.

“This year, I think Michigan will be better than they were last year. I think Ohio State will be much better than they were last year. So I think the league will be much improved. I think Illinois will be a lot better being healthy. The league will be much improved, but I’m not sure that there’s a runaway favorite a year ago, and Illinois will be better, but there’s not a runaway favorite in the league that gives you a top-five team. I don’t see any team. Wisconsin would probably will be the best team going in to me.”

On what Indiana needs to do to beat Kansas as well as its strengths and what it needs to improve upon moving forward:

“Indiana’s got good depth and they’ve got some really good players. They’ve recruited really well. They play hard and they play together. Offensively, they’re a joy to watch. It’s got to be a fun way to play. They get the ball up the floor quickly. They don’t have a point guard. There’s not somebody like Yogi Ferrell that you can just give the ball to and that person is going to run everything. Their point guard is going to have to be by committee where they can pass the ball ahead. The ball can’t just stick in one guy’s hands and have him run everything. It looks like they’re doing a good job of that. Along with that comes some issues of turnovers. As simplistic as it sounds, passing and catching is going to be a big deal and making sure they don’t cough the ball up and put their defense in a bad spot.

“Thomas Bryant, how he plays is going to be a big deal. Two guys have to make big jumps for them. Thomas Bryant is one. He had a really good year last year and is capable of more and the other is OG Anunoby. He was a player that came in and whatever he gave you last year was a real lift, but I think he’s got to do it now when expected to do it and in more minutes. And every game. It’s got to be every game.

“They’re going to have to do a really good job defending the actions that Kansas runs. Kansas can play big or small. Their big guys like to get angles. They do a really good job of throwing the ball into the post with an angle. I think your post defense has to be really good.And then your pressure on the ball has to be really good to take vision away. The other part of that is that Indiana is going to have to do a really good job, when talking about defense, of turning defense into offense and getting down the floor whether its off a miss or a made basket, getting down the floor and getting into transition quickly. That’s what Indiana does, but doing that without turnovers, I think is going to be really important. Kansas is a little bit more experience, especially more experienced at the guard spots, so it’s going to be a real challenge for the first game of the year. Both of these teams are capable of being in Arizona at the end of the year for the Final Four. I think Kansas is probably a little bit ahead right now of Indiana because of their experience level. I think it’s going to be a great game. I’m really excited to see it.”