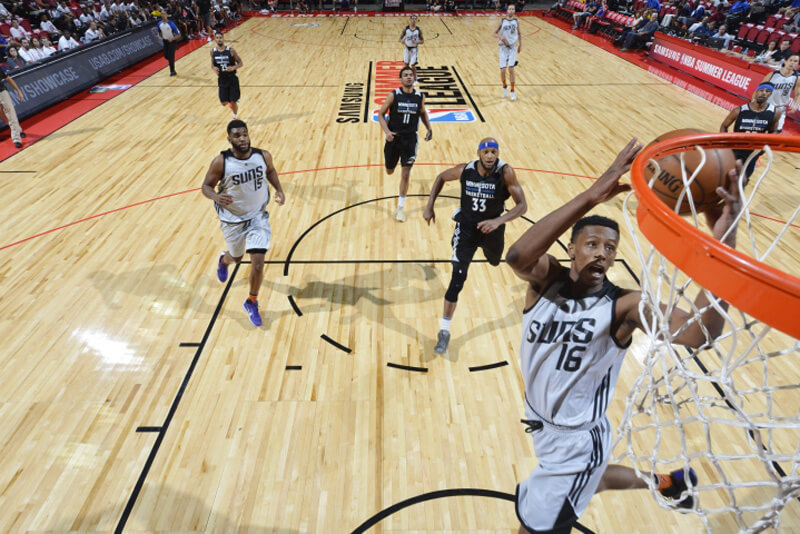 The Samsung NBA Summer League wrapped up on Sunday in Las Vegas. Here’s Inside the Hall’s look at how the four Hoosiers who participated – Yogi Ferrell, Troy Williams, Noah Vonleh and Verdell Jones – performed:

Williams was mentioned prominently in Sunday’s recap on the official site of the Suns:

Once he put his head down and got some momentum behind him, there was little Minnesota could do to stop Williams on his way to the basket. The 6-7 forward earned a game-high 15 free throw attempts and made good on 14 of them. He was also 5-of-6 inside the three-point arc, using his athleticism and creativity to score over, under and through defenders.

Williams is a free agent, so it will be interesting to see if Phoenix or another NBA team invites him to training camp.

ArizonaSports.com also had a piece on Sunday suggesting that Williams won’t have a problem finding a guaranteed contract from an NBA team.

Overall, his play in Vegas wasn’t particularly strong as he scored in double figures just once and only had one game with more than two assists.

Will that be enough for Ferrell to earn a serious look from the Nets or another franchise in a training camp this fall?

· Noah Vonleh, Portland Trail Blazers: As a Summer League veteran, Vonleh appeared in just four games, but scored in double figures in each contest. He also had double figure rebound totals in three of the four games.

Vonleh, however, was not happy with how he played according to OregonLive.com:

“No, I’m not too happy with how I’ve played,” he said following the Blazers loss to the Utah Jazz on Wednesday. “I rebounded the ball well, but there’s just some things that I want to have translate for next season so I can get some playing time. Like reading the play, doing the right thing.”

The Blazers made moves to bolster their frontcourt in the offseason, adding Festus Ezeli to join an already crowded big man rotation with Mason Plumlee, Meyers Leonard and Ed Davis. Throw in the fact that the Blazers want to get Al-Farouq Aminu regular minutes at power forward and it is clear playing time could be an issue for Vonleh.

“It’s going to be tough,” he said. “We’ve got a great group of guys coming in so everybody is going to be fighting for playing time. If you don’t come ready for training camp, you’re not going to play. I got to get my mind right and get ready for that.”

· Verdell Jones, D-League Select: Jones started just one of D-League Select’s five contests and is probably looking at going overseas unless he wants to give the D-League another shot.

D-League Select finished 3-2 and Jones logged double figure minutes in two of the four games he played in.