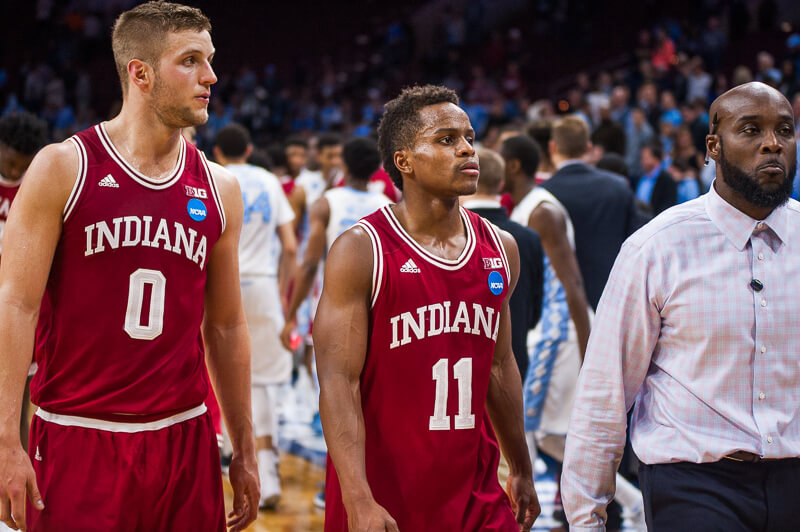 North Carolina couldn’t shoot, and yet here was Marcus Paige dropping three … after three .. after three … after three. The Tar Heels were hot from distance from the start and it was an early nail in the coffin for Indiana’s hopes at its first Elite Eight berth under Tom Crean. The Hoosiers went down by 10 with 9:49 to go in the first half and never got any closer the rest of the way.

“We haven’t shot like that all year,” Roy Williams told Crean as they shook hands after the game.

North Carolina entered the game shooting just 31.4 percent from distance. The Tar Heels finished off the Hoosiers’ season by hitting 55 percent (11-of-20) from distance. It wasn’t all that sunk Indiana. Entering the game as the fourth best offensive rebounding team in the country, the Tar Heels snagged almost half their misses (47%) and even got three rebounds on multiple possessions in the second half. Their free throw rate was 53 percent and they hit 26-of-33 from the charity stripe. They turned it over on just 13 percent of their possessions. North Carolina scored 1.42 points per possession and shot an effective field goal percentage of 60.

Add it all up and Indiana simply was outplayed from start to finish.

Troy Williams tried to get Indiana over the hump to start the second half. IU’s junior wing scored 14 of Indiana’s first 16 points. But Indiana still trailed by 10 after his 3-point play at the 14:24 mark. It was as close as they’d get the rest of the way, as UNC’s lead would balloon all the way up to 22 at the 4:52 mark.

The Tar Heels were even in the bonus in the second half before the first TV timeout. Have you ever seen that before? At times, Indiana appeared lost and lacking confidence and rhythm on offense. Still, the Hoosiers were able to muster 1.21 points per possession, post 86 points against a team that entered the contest with a top 10 defense on KenPom and turned it over on a respectable 17 percent of their possessions.

In his final college game, Max Bielfeldt went 5-of-10 from the field (3-of-5 from distance) and finished with 15 points. Yogi Ferrell’s final performance in the cream and crimson was one the celebrate, as he hit 6-of-14 from the field, scored 25 points and had four assists. Williams turned it over three times, but scored 21 (6-of-14, 4-of-9 from 3-point range).

Had UNC not been so hot from 3-point range and IU done a little better on the boards, the Hoosiers might have been within striking distance down the stretch. But it simply wasn’t the case.

But after this loss, banner No. 6 remains a dream, not reality. In Philadelphia, a city the Hoosiers have had a strong history in during the NCAA Tournament, the road ends in unspectacular fashion.