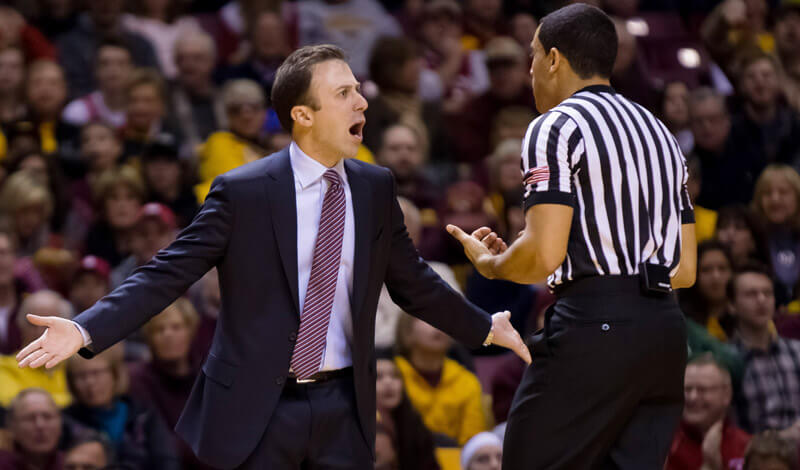 The numbers said Minnesota was no good. They implied Indiana was primed to march up to the Barn and come away with a comfortable victory over a struggling squad.

But that quickly got thrown out the window. Because Minnesota played with desperation. And a desperate team playing like it’s their last game on earth can seize control and flip the script. The Golden Gophers were physical from the onset. They packed the paint, double-teamed Thomas Bryant and held the Hoosiers out of offensive flow. On the other end, Minnesota went right after Indiana’s defense and forced fouls. Nearly a third (11) of their 34 first half points came from the charity stripe.

Minnesota got up by as much as nine in the first half as the Hoosiers missed 3-pointers and turned the ball over at too high a rate (27.4 TO% in first half). But Nick Zeisloft came to save the day. His shot’s been off a bit so far in Big Ten play — including an 0-for-8 mark against OSU — but it recovered in a big way today. Zeisloft hit four straight 3s during an impressive stretch in the first half and it helped the Hoosiers go into halftime tied up at 34.

As the first half came to an end, if felt like Indiana was beginning to figure things out. The Hoosiers were maybe, just maybe setting up to blow the doors off the Barn in the second half and cruise to a double-digit victory. An early steal by Robert Johnson which led a Yogi Ferrell 3-pointer had you feeling that way even more. But Indiana could only punch the lead out to eight on a couple occasions before the Golden Gophers came down and hit on their end to ensure Indiana didn’t extend the lead any further. A blowout just wasn’t in the cards today.

So the Hoosiers just had to keep things going and find enough success on both ends to get out of Minnesota with the W.

Yogi Ferrell was a big reason the Hoosiers did just that. With Robert Johnson saddled with foul trouble and Thomas Bryant not in the game the final 7:31, Ferrell was the do-everything Hoosier. On an afternoon he moved to second all-time on Indiana’s assists list (544), Ferrell got it done down the stretch. He didn’t shoot it great and took a few too many long 2s. But he had some key assists and scored four points in the game’s final minute. The first two came on a steal and score. The second two came at the line.

Ferrell was clearly fatigued down the stretch from all the minutes (37), but keep coming with everything he had in the tank and never turned it over. (Nor did the Hoosiers the final 16:34 of the game. One of their most impressive stats of the season and another key to the victory.) The senior (20 points, seven assists, six rebounds) wanted this win and he got it. These are the moments he came back to Indiana for and he deserves your praise.

Indiana’s defense also persevered once more and held its fifth straight conference opponent to under a point per possession (.91). It was all just enough to make sure the Golden Gophers never re-claimed a lead despite their desperation.

It wasn’t their greatest performance, but the Hoosiers took care of business yet again during their softer early Big Ten slate. They continues to find different ways to win when they aren’t firing on all cylinders. It should serve them well when the tougher conference challenges come.