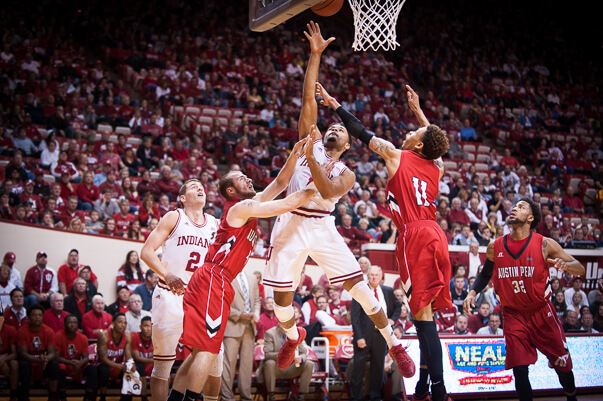 A few quick thoughts on Indiana’s 102-76 win over Austin Peay:

How it happened: It wasn’t pretty (particularly defensively), but Indiana caught fire from distance midway through the second half to pull away from Austin Peay. At one point, Indiana made 15 consecutive field goal attempts and the Hoosiers finished the game 16-of-27 on 3-pointers.

Standout performer: Yogi Ferrell extended his NCAA leading streak of games with a made 3-pointer to 67. Ferrell is now just 21 games shy of tying the all-time NCAA record. He finished with 22 points, nine assists and six rebounds.

Statistic that stands out: After struggling through two exhibitions and the season opener, Indiana torched the nets from distance for an effective field goal percentage of 80. That figure was higher than Indiana had in a game at any point last season.

Number that needs work: The Hoosiers struggled to defend Austin Peay, which finished last season in the bottom 30 nationally in effective field goal percentage. The Governors scored .97 points per possession. Simply put, Indiana didn’t put up enough resistance at the rim and left shooters far too often on the perimeter. 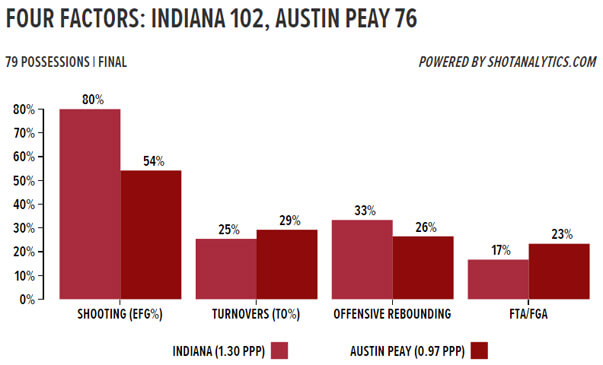