At the buzzer: Indiana 88, Eastern Illinois 49 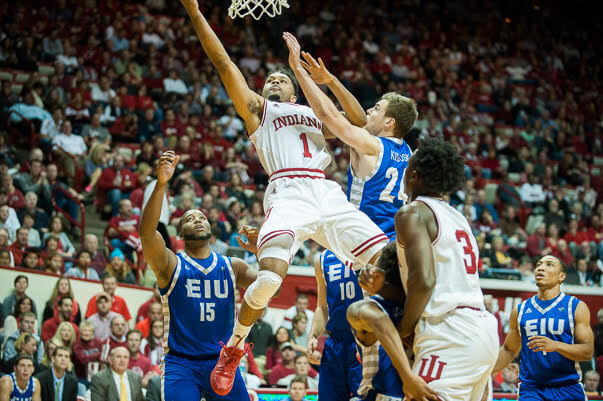 How it happened: The Hoosiers were only challenged for about the first five minutes as a 9-7 lead at the 15:11 mark ballooned to a 30-point cushion late in the first half. Indiana was able to cruise from that point forward with little resistance. The lead was primarily built on strong offensive rebounding (14 second chance points in the first half) and the fact that EIU simply couldn’t stay in front of IU without committing fouls. The new freedom of movement rules were called closely and IU went to the foul line 25 times.

Standout performer: James Blackmon Jr. set the tone early in the game by scoring a team-high 12 points in the first half to lead all scorers. More importantly, Blackmon Jr. was solid defensively, a major point of emphasis for him coming into his sophomore season. He finished with 17 points and seven rebounds in 22 minutes.

Statistic that stands out: Eastern Illinois had no answer for Indiana’s aggressiveness on the offensive glass as the Hoosiers grabbed 21 offensive rebounds (63.6 OR%), leading to 26 second chance points. This is likely to be a theme in early non-conference games where the opposition will have little shot at countering IU’s athleticism at the rim.

Number that needs work: Indiana hit just 16 of its 45 3-point attempts in its two exhibition games (35.5 percent) and again struggled from deep in the opener. IU hit just 9-of-27 of its 3s against Eastern Illinois. After finishing last season as the nation’s sixth best shooting team from deep last season, it’s probably only a matter of time before those shots start falling.