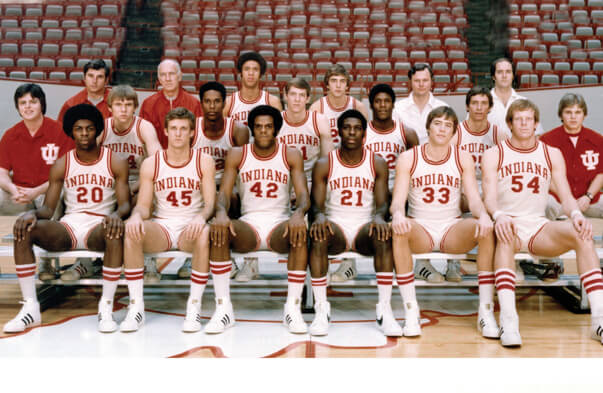 Indiana announced Friday that it will be honoring the 40th anniversary of its undefeated 1976 national championship team throughout the 2015-2016 season.

The Hoosiers will wear a commemorative patch, will hold a public recognition during a home game this season and will also induct two members of that team into the athletics Hall of Fame. Here are the complete details, via IU Athletics:

BLOOMINGTON, Ind. – Indiana University Vice President and Director of Intercollegiate Athletics Fred Glass today announced initial plans for a season long recognition to honor the 40th anniversary of the undefeated 1976 men’s basketball team. Indiana’s 1976 team remains the last undefeated NCAA men’s basketball champion and was selected as the greatest college basketball team of all-time on the 75th anniversary of the NCAA Tournament in 2013.

The season-long honoring of the 40th anniversary is being highlighted by: season tickets being mailed to fans in a folded keepsake replica of the 1976 championship banner; a commemorative patch placed on the back of IU’s home and away jerseys throughout the year; a public recognition of that perfect championship season during IU’s home game against Wisconsin on January 5, 2016; and the upcoming induction of Bobby Wilkerson and Tom Abernethy into the IU Athletics Hall of Fame. With Wilkerson and Abernethy being inducted tonight, all five starters from the 1976 undefeated team will now be in the IU Athletics Hall of Fame along with head coach Bob Knight.

“The undefeated 1976 NCAA Champions were not only the last team to enjoy a perfect season, they are rightly considered the greatest college basketball team of all-time,” said Glass. “As a life-long IU basketball fan, the 1976 team will always hold a special place in my heart and in the hearts of hundreds of thousands of other IU fans. It is a great privilege for us to honor their 40th anniversary with a season-long recognition of their singular and legendary accomplishments.”

“One of my most vivid memories as a college basketball fan was following and watching the great Indiana team of 1975-76,” said head men’s basketball coach Tom Crean. “They were tough, unselfish, determined, and relentless, but most of all they believed if they worked together as one, they would reach their ultimate goal. It has been an honor to get to spend time with and get to know so many of those associated with that team since coming to IU. They are the standard by which all college basketball teams are measured, and I’m sure that all of Hoosier Nation will treasure the opportunity to recognize the coaches, players and staff of a program that everyone in our sport aspires to emulate.”

“The 1976 National Championship team was truly one of the greatest teams in college basketball history,” said legendary “Voice of the Hoosiers” Don Fischer. The records set and the honors received by that team have stood the test of time. Having all five starters from that team inducted into the IU Athletics Hall of Fame, along with their head coach, is a testament to how special that team and their accomplishments really were. It is great to see IU Athletics continue to honor this great team in such a way.”

This season-long recognition continues IU Athletics efforts in recent years to honor the accomplishments the players and coaches from the back-to-back undefeated regular seasons which, among other things, established Knight as a legendary coach and produced four All-Americans, three Big Ten MVP’s, and a National Player of the Year. Last season, IU honored the seniors from the 1975 team that won the Big Ten Championship and finished the regular season undefeated with an on-court public recognition.

In 2013, Scott May (represented by his son Scott Jr.), Kent Benson, Isiah Thomas, Steve Alford (represented by his father), and Keith Smart (represented by Todd Meier) were also recognized in a half-time ceremony for being named as some of the greatest players in the 75 year history of the NCAA Tournament. In addition to the induction of Abernethy and Wilkerson in the IU Athletics Hall of Fame this year, Coach Knight was inducted in 2009.

More details on the season-long recognition of the 1976 Indiana Hoosiers will be announced throughout the season. 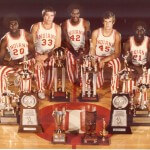 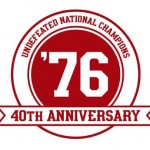 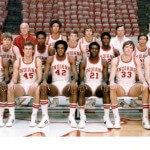