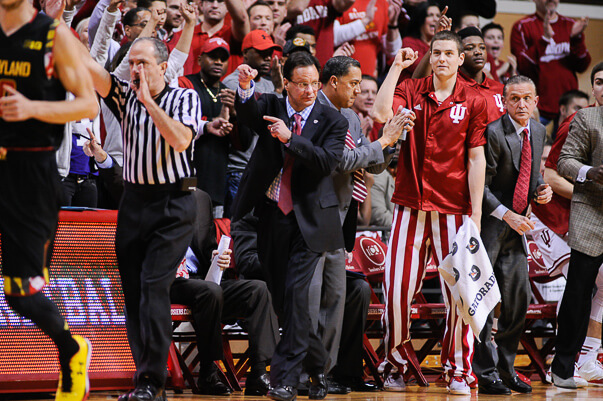 Following the Big Ten’s release of the conference schedule, Indiana released its complete schedule for the 2015-2016 on Thursday evening.

The complete schedule is now available on our schedules page. Read IU’s full release on the schedule after the jump.

BLOOMINGTON, Ind. – The Indiana University men’s basketball team could face as many as four teams (Kansas, Duke, Vanderbilt and Notre Dame) who have been nationally ranked this preseason during the non-conference portion of their schedule and will have one-play home games against preseason #1 Maryland, Ohio State, Purdue and Northwestern as well as home and home games with Illinois, Iowa, Minnesota, Nebraska and Wisconsin. The Hoosiers will have one-play road games at Rutgers, Michigan, Michigan State and Rutgers.

IU will return home for a home game against Alcorn State (November 30) and then will travel to defending national champion Duke (December 2) for the Big Ten/ACC Challenge. The Hoosiers will begin a three-game homestand hosting Morehead State (December 5), IPFW (December 9) and McNeese State (December 12). After a week of final exams, the Hoosiers will play Notre Dame in the Crossroads Classic at Bankers Life Fieldhouse in Indianapolis. IU will wrap up its non-conference schedule at home against Kennesaw State (December 22).

The final game of the regular season will be a home game against preseason #1 Maryland (March 5 or 6).