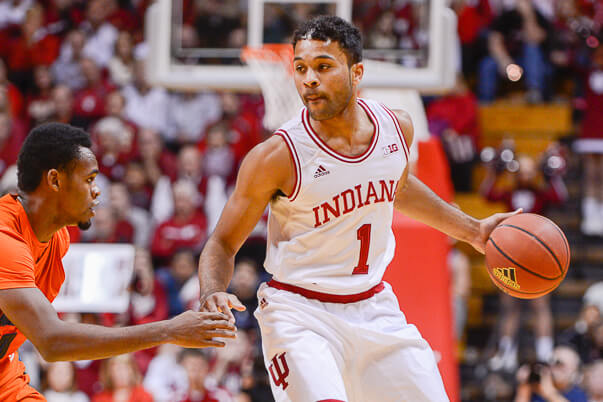 Editor’s note: We’ve listed two players at the No. 14 slot as we determined a player in the top 15 was mistakenly omitted after the list was finalized.

Entering his senior year, Shavon Shields has improved steadily throughout his career at Nebraska. His per game scoring averages have risen from 8.6 to 12.8 to 15.4 points per contest and he’ll finally have the opportunity to be the go-to guy for the Cornhuskers with Terran Petteway out of the picture. Shields excels in the mid-range, where he takes 41 percent of his shots and shoots 41 percent according to Shot Analytics, and is effective attacking the basket.

His 3-point stroke has yet to come around as he connected on just 19.5 percent of his long range attempts last season. He scored 19 or more points in 11 games last season, including 21 points in the Huskers best win of the season over Michigan State, but playing for a team that lost 11 of its last 12 games makes the statistics a bit hollow.

As a freshman, Zak Irvin was essentially a volume-shooter off the bench. He served his role perfectly, but Michigan didn’t need him to do anything other than shoot (He handed out 13 assists total during his freshman year, averaged barely more than 1 rebound per game and 75 percent of his field goal attempts were threes). As a sophomore, he was thrown to the wolves after Caris LeVert and Derrick Walton went down to injuries mid-season and, eventually, stepped up to the challenge.

Irvin was forced to be Michigan’s primary creator and playmaker for the second half of the season and while it took him time to find comfort in the new role, eventually he developed into a new player by season’s end. There were pretty significant growing pains along the way, but in March everything started to click. Irvin averaged 17 points per game over the final nine games of Michigan’s season. Even more impressively, he handed out 23 assists in the Wolverines’ final 5 games.

He won’t be called upon to lead Michigan’s offense this season with Caris LeVert and Derrick Walton flanking him in the backcourt again, but the skills he gained as a playmaker should pay dividends in 2015-16.

Blackmon Jr. underwent surgery to repair a minor knee injury last month, but he’s expected to be healthy in time for the start of practice. He was one of the more difficult guys to place on this year’s list because he was very good offensively in his debut season, but has plenty of work to do on defense. As a freshman, he scored 518 points, the third highest total ever for a freshman in an IU uniform.

His offensive game is built primarily off of his perimeter shot as he hit close to 39 percent of his 3s last season. Offensively, Blackmon Jr. adjusted just fine to the physicality of the Big Ten and benefited greatly from playing alongside Yogi Ferrell, Robert Johnson and Troy Williams, who found him often in rhythm for outside shots. Defensively, however, Blackmon Jr., like many on IU’s roster, struggled to contain dribble penetration and must exhibit improvement there to jump into the top echelon of the Big Ten’s guards.

Eron Harris transferred from West Virginia to Michigan State and sat out last season due to NCAA transfer rules. After a year of serving as the Big Ten’s best scout team player, Harris will finally bring his shooting and scoring ability to the Big Ten. By the numbers, Harris should be an instant impact star in the conference. He was able to accumulate gaudy scoring totals despite playing alongside another high-usage point guard in Juwan Staten.

While we know Harris can score, there are still plenty of areas for him to improve on his sophomore numbers. He shot just 45 percent on 2s and wasn’t much of a distributor. The defensive and rebounding expectations should be more severe under Tom Izzo and there’s still the burning question of how West Virginia improved last year after losing Harris.

The Spartans return several backcourt pieces from last year’s Final Four team — including Denzel Valentine, Bryn Forbes and Tum Tum Nairn — but there’s an obvious role for Harris to fill with the graduation of Travis Trice.

The Swanigan recruitment was one of the more intriguing sagas to follow last spring. His list of offers was stocked full of elite programs, including Arizona, Duke, Kentucky and many others. After initially committing to Tom Izzo and Michigan State in April, the Fort Wayne Homestead product spurned the Spartans a month later and opted for Purdue. He’s the first McDonald’s All-American to sign with Purdue since 1996.

So what does Swanigan add to the program beyond the additional fuel to the fire for future Michigan State-Purdue games? At 260 pounds, he moves well for his size, has very good touch in the paint and should immediately become one of the league’s best rebounders. With A.J. Hammons and Isaac Haas anchoring the center position, Swanigan will be incredibly difficult for Big Ten opponents to contain at the four. Matt Painter never played Hammons and Haas together last year and will have that same luxury this year as Swanigan instantly becomes the starter at the four.

The Hawkeyes are one of the tougher teams to forecast in the Big Ten this season. On one hand, Fran McCaffery returns four starters, highlighted by Uthoff. On the other, both Aaron White and Gabriel Olaseni are gone, which puts some pressure on Uthoff to deliver even more production in his final season. One of the best all-around players in the league, Uthoff is a tough matchup because of his size and versatility.

He made over 37 percent of his 3s as a junior and was one of the league’s better shot blockers. He also rarely turned the ball over (10.2 percent turnover rate) and is an above average defensive rebounder. With White gone, he’ll be expected to carry more of the load offensively. To become more efficient, he must shoot a higher percentage on 2s (46.8 percent) and also make an effort to get to the line after taking just over two free throws a game as a junior.