Indiana lands at No. 14 in updated ESPN preseason top 25 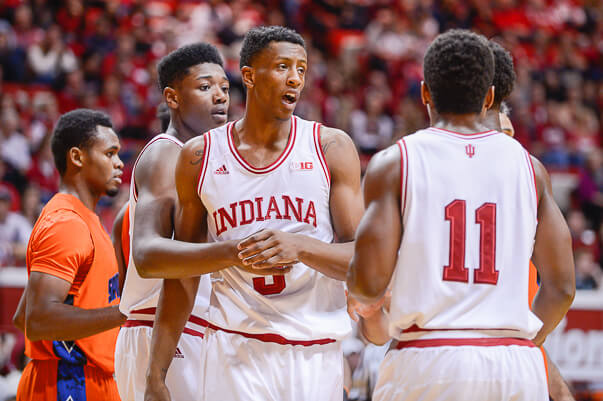 It appears the Hoosiers will have plenty to live up to entering the 2015-2016 season.

Behind Maryland in the top five are North Carolina, Kentucky, Virginia and Kansas, a potential opponent for the Hoosiers in November’s Maui Invitational.

Duke, who IU will face in the Big Ten/ACC Challenge at Cameron Indoor Stadium, checks in at No. 6. Notre Dame, this year’s opponent for IU in the Crossroads Classic, is No. 16. Vanderbilt, IU’s potential second round opponent in Maui, comes in at No. 18.

His justification for the top 15 nod for the Hoosiers? An elite offense and the addition of McDonald’s All-American Thomas Bryant.

Maryland is the Big Ten’s runaway favorite, but the competition will be slightly more fierce than what Wisconsin experienced a season ago. (The vast majority of the Big Ten season was played before March, which is why Michigan State didn’t go 18-0.) Indiana is atop that second tier. The Hoosiers are bringing almost all of their considerable offensive firepower back, from guards Yogi Ferrell, James Blackmon Jr. and Robert Johnson, to rim-running four Troy Williams, to the coterie of floor-spacing sharpshooters (Nick Zeisloft, Collin Hartman) that often made Indiana one of the nation’s most watchable teams. Adding No. 6-ranked freshman center Thomas Bryant should mean better interior defense and rebounding, which isn’t saying much, given how bad IU was on that end of the floor last season. But, man, can they put the ball in the bucket.

ESPN.com’s Joe Lunardi also released an updated Bracketology which slotted IU as a No. 3 seed.