The Minute After: Wichita State 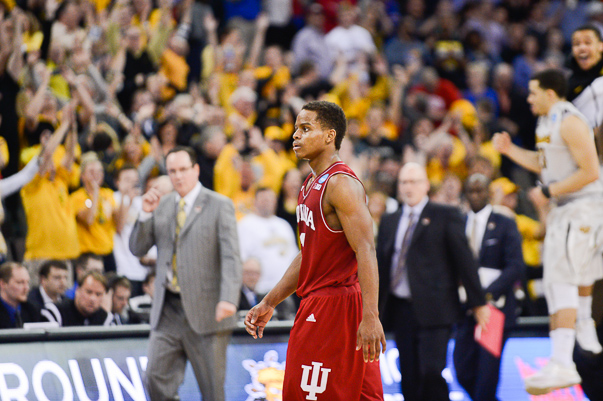 Indiana brought the proper fight, played its game and hung in the best it could. But Wichita State’s experience got the best of the Hoosiers down the stretch, and Indiana’s shot at the upset went with it.

After a Darius Carter free throw at the 10:24 mark in the second half put the Shockers up one (55-54), they never relinquished the lead. Yet, the Hoosiers made sure a blowout wasn’t on the way. Down eight and on the ropes with 7:53 to go, James Blackmon Jr. (14 points, five turnovers) made a lay-up. Two free throws from Yogi Ferrell and a Troy Williams 3-pointer pulled them back within three points (67-64).

Despite getting within two points twice in the final two minutes — including two free throws from Ferrell that had them there with as little as 32 seconds to go — the Shockers just played a little smarter and hit from the line to ensure the five-point win for the opportunity to make it to Sunday’s round of 32 against Kansas.

With 53 seconds left and Wichita State up by two, a beautifully drawn up play out of a timeout saw a nice high-post assist from Carter to Tekele Cotton for a bucket. The Shockers hit 7-of-8 from the line over the final two minutes, while Indiana wasted 13 seconds during it after closing the gap at 32 seconds left, as they didn’t foul Ron Baker until 19 seconds left. Tom Crean screamed for the foul from the sidelines to no avail.

So down four after Baker hit both, Blackmon Jr. missed on the other end and then turned the ball over on his offensive rebound. That just about did it for the Hoosiers.

Indiana got into foul trouble in both the first and second half. Its frontcourt of Hartman, Emmitt Holt, Hanner Mosquera-Perea ended the game with 10 combined fouls. Hartman and Holt each had four. Blackmon Jr., Robert Johnson and Williams ended the contest with three a piece. The Shockers made them pay for it with a strong free throw rate (FTA/FGA) of 55.7 and an impressive 29-of-34 (85.3 percent) performance from the line. And while Indiana’s defense wasn’t as bad as we’d seen from them during the late-season slide, it had its holes.

On an afternoon Wichita State’s overall shooting wasn’t great (42.6 eFG%, just 2-of-13 from 3-point range) and leading scorer Ron Baker struggled from the field (3-of-13), the Shockers feasted on drives to the lane. They scored more than half their points (44) in the paint. Fred VanVleet torched the Hoosiers for 27 points thanks to a number of drives. He also hit 9-of-10 from the line.

The Shockers threw a press at the Hoosiers for good stretches of this game and it got their eyes big at times. When some more ball movement — or really any ball movement — might have been the better decision, Indiana saw lanes or minimal defense over the half court and just went for it. It sometimes resulted in a turnover. Couple that with some questionable passing at times in the half-court and Mosquera-Perea looking lost in the post and Indiana turned the ball over 18.8 percent of its possessions, which led to 18 points off turnovers for the Shockers. And while Indiana did a nice job on the offensive glass (33.3 OR%, 14 second-chance points), so did the Shockers (37.5 OR%, 14 second-chance points.)

But the better, more experienced team did all the little things sharper than the Hoosiers and it proved to be the difference. In an up and down year filled with plenty of off the court distractions, this team gave the proper energy and effort once the postseason hit.

Yet, it still lost five of its last six. Tom Crean’s Hoosiers have now failed to win a tournament game in two seasons. It’s not what Indiana fans expect, and so the outside noise is unlikely to cease.