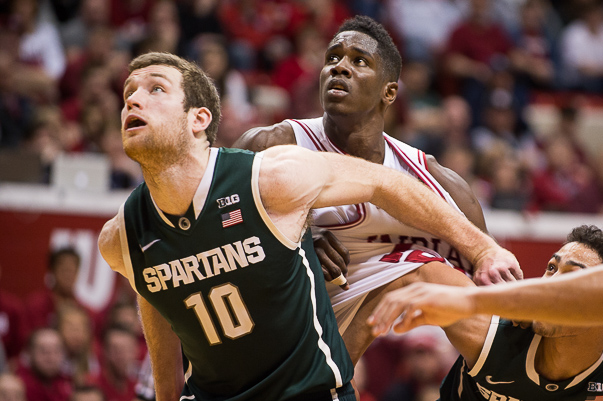 Indiana suffered its third straight loss on Saturday afternoon in Assembly Hall as Michigan State controlled the second half and held off a late rally for a 74-72 win. The loss dropped the Hoosiers to 19-12 overall.

· Indiana has another early, costly second half lull: A pair of layups, one by Hanner Mosquera-Perea and another by Yogi Ferrell, pushed Indiana to a 38-34 lead at the 18:56 mark of the second half. The crowd in Assembly Hall was engaged.

The next two and a half minutes, however, would set the tone for most of the second half. On Michigan State’s next possession, the Spartans missed a pair of 3-pointers, but grabbed offensive rebounds on both before Travis Trice set up Marvin Clark for a 3-pointer. By the 16:13 mark, Michigan State was in the midst of a 9-0 run and even though IU would again take the lead briefly in the subsequent minutes, the inability to sustain energy early in the second half proved costly.

“They got a lot of second-chance opportunities with the offensive rebound kick outs,” Yogi Ferrell said. “We’ve just got to fight them better. Got to crack them before they come into the paint because we know that they are big.”

· Michigan State dominated the glass – without its best rebounder: The absence of senior forward Branden Dawson, who ranks in the top four of the conference in both offensive and defensive rebounding percentage, didn’t stop Michigan State from having a field day on the offensive glass in Assembly Hall.

The Spartans rebounded 34.9 percent of their missed shots and finished with 18 second-chance points. When Indiana was winning games early in the conference season, keeping opponents off the offensive boards was a crucial component to the success. But in IU’s last three home losses, the Hoosiers have allowed offensive rebounding percentages of 50, 33.3 and 34.9.

Particularly alarming in yesterday’s game was just how poorly Hanner Mosquera-Perea and Troy Williams hit the defensive boards. The duo combined for four defensive rebounds in 38 minutes. And Williams, who had 27 rebounds in his previous two games, had just three total rebounds.

· A tough ending for Ferrell: If that was Yogi Ferrell’s last Big Ten game in Assembly Hall, it was a tough way to go out. Indiana’s late run, chronicled here by Jordan Littman, put the Hoosiers in position to tie the game in the closing seconds.

And with Ferrell, the team’s second best free throw shooter in conference play, at the line, the game appeared destined for overtime. But after Ferrell got a bounce on the first free throw to cut the Michigan State lead to one, his second free throw missed and he pulled his jersey over his head in disbelief.

Ferrell has been fantastic all season for Indiana and has no reason to hang his head, but that’s a free throw he’ll likely remember for a long time, especially if the Hoosiers fail to reach the NCAA tournament.

“I guess the basketball Gods were good for me for that first free throw and then the second one just rolled out,” he said postgame. “Pretty disappointing missing that second one, but it happens.”

· Indiana’s inability to defend is the storyline of the season: Many wondered if Indiana’s 5-1 start in the Big Ten was built too much on an offense that would be hard pressed to sustain itself throughout the conference season.

The defensive issues for this group have been well-documented all season and as it turns out, IU’s defense simply was not good enough to carry the Hoosiers past the league’s best teams. Looking at the final 9-9 Big Ten record, the Hoosiers went 7-1 against the teams below them in the standings (that includes Illinois, which also finished 9-9) and 2-8 against the teams above them with the two wins coming at home over Ohio State and Maryland.

Indiana raised expectations for the season with some good non-conference wins and a solid start to the league schedule, but ultimately, this team ended up finishing right in the middle of the pack because of its poor defense.

· Nick Zeisloft’s shooting keeps Indiana in the game: The addition of Zeisloft last offseason was met with plenty of questions from Indiana fans, but with the conference season now complete, it’s clear that he was a valuable addition.

Zeisloft again shined from the perimeter on Saturday, knocking in five of his eight 3-point attempts. He added a layup to finish with 17 points. The redshirt junior ended the conference season 36 of 70 from distance (51.4 percent), which led the league.

And as he’s done all season, Zeisloft gave his teammates all of the credit for his success.

“My teammates are doing a great job of finding me when I’m open,” he explained. “Whenever we move the ball and move bodies and are cutting hard, any of us can go off of that.”