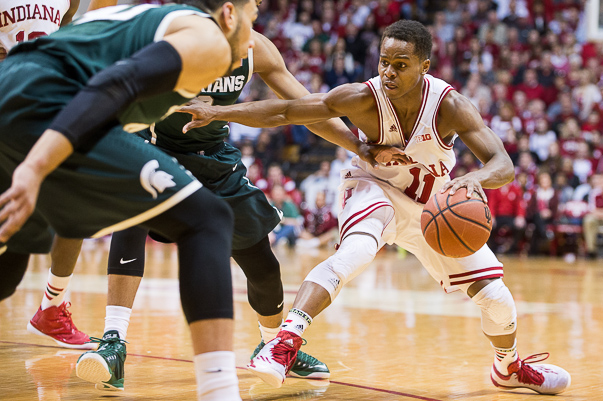 After a Yogi Ferrell turnover with 3:42 to play, the Hoosiers looked sunk as they entered the under-4 media timeout. Their zone allowed too many good, open looks — both in the paint and from distance — over the first 16 minutes of the second half. Michigan State, as it did in the first half, continued to rip down offensive rebounds for second-chance opportunities.

Down 11, this had the feelings of the Iowa game from earlier in the week. Indiana seemed destined for another double-digit loss, its third straight on its home floor. Assembly Hall reigned down some boos and some fans headed for the exits.

But Indiana looked inside itself and failed to lose without a fight. The defensive intensity ramped up a notch and the Hoosiers kept chipping away at the lead as the crowd — the majority of which stayed — kept right with them. A James Blackmon Jr. and-1 in transition brought the Hoosiers within five with 1:47 to go. Playing the foul game to stop the clock, Indiana stuck with it and pulled within three points (72-69) thanks to a Nick Zeisloft 3-pointer (5-of-8 from distance) with 27 seconds to go. After a Michigan State timeout, the Spartans inbounded the ball to Matt Costello and he was fouled with 24 seconds left. He’d miss the first free throw. And the second.

Suddenly, Indiana had the ball with a chance to tie. After a shaky possession, Blackmon Jr. appeared to be fouled as he went up for a 3-point attempt. The refs called it on the floor. Blackmon made the first free throw. And the second. One point game at 72-71. Travis Trice would make his first free throw on the subsequent IU foul and miss his second. 73-71 Michigan State. As Yogi Ferrell streaked down the floor, Denzel Valentine made a crucial error and fouled him near halfcourt to send Ferrell to the line with a chance to tie the game on a double bonus with just two second left. Valentine knew it. He put his hands in his face and bent over at the top of the key.

Indiana needed a miracle to crawl back into this one, and it looked like it had just gotten it.

Ferrell’s first free throw bounced all over the place and just rolled in. Drama. One point game. His second missed.

“I guess the basketball gods felt good for me on the first free throw, but the second one just rolled out,” Ferrell said.

Collin Hartman fouled Trice on the rebound with .7 to go. He made the first. Missed the second. Zeisloft’s desperation 3-pointer at the buzzer didn’t fall. 74-72 Michigan State.

There are gripes here. Ferrell was clearly tripped on a 3-point attempt to end the first half, but the refs went with a no call. Had the correct call been made, that’s another three points for the Hoosiers to pick up and it could have been the difference.

Michigan State only went 7-of-28 from distance, 11-of-20 from the line, finishing with a pedestrian 49.2 eFG%. But Indiana’s failure to lock up the boards — Michigan State rebounded 34.9 percent of its misses for 18 second-chance points — was killer. As was its defense for most of the second half until it turned it up late.

“I’m proud of our fight,” Tom Crean said in his post-game remarks.

Indiana better bring the fight of the last few minutes for its Thursday game to start the Big Ten Tournament. Because if the Hoosiers don’t go on a run and win a couple games, their tournament fate hangs in the balance of the committee — and they might be on the outside looking in for the second season in a row.