March Watch: IU a No. 7 seed in most recent projections 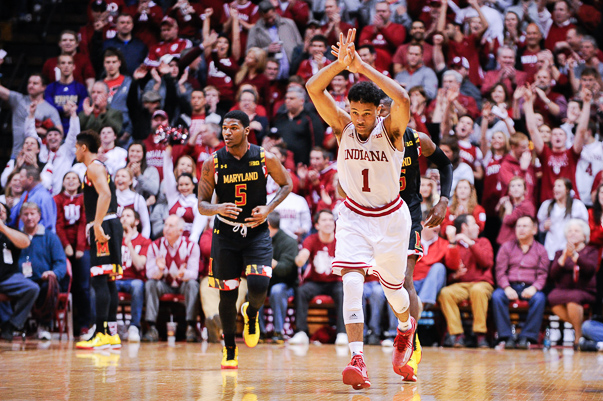 For the fourth straight week, Indiana split a pair of games, but the Hoosiers remain in very good position to return to the NCAA tournament after missing the postseason last season. The Hoosiers enter Wednesday’s game against Northwestern at Welsh-Ryan Arena with a 19-9 mark overall and a 9-6 record in Big Ten games.

We’re back this week with another edition of “March Watch,” which will be a weekly feature up until Selection Sunday on March 15. We’ll take a updated look at IU’s current nitty gritty profile, bracket projections, the Big Ten’s tournament prospects and more.

Indiana has built a strong tournament profile with several wins over teams currently projected to make the field including Butler, SMU, Ohio State and Maryland. IU also has a win over Illinois, which is right on the bubble line in most projections. With three conference games to go, including two at Assembly Hall against teams who could make the tournament, opportunities remain for Indiana to further strengthen its resume.

Indiana fell at least one seed line in all three bracket projections we’re tracking and fell two spots in the CBS bracket following the loss at home to Purdue. That said, the seeding model on Crashing the Dance currently has the Hoosiers with the third best overall profile among Big Ten teams behind Wisconsin and Maryland and just ahead of Michigan State.

With three regular season games remaining, KenPom.com continues to project Indiana to finish 21-10 overall with an 11-7 mark in the conference. The Only Colors, which has been projecting the Big Ten race all conference season, gives Indiana a 94.2 percent chance to finish with 10 or more conference wins (down from 97.3 percent) and a 65.2 percent chance to win 11 or more Big Ten games (down from 84.9 percent). That model also shows Indiana as a long shot for a Big Ten tournament double bye with just a 22.3 percent chance of a top four conference finish, down from 57.1 percent a week ago. RPIForecast.com continues to list 21-10 as the most likely final regular season record for IU:

· Wisconsin (25-2, RPI 6): The Badgers are in competition with Gonzaga and Duke for a No. 1 seed and may have to win out in the regular season and Big Ten tournament to get there. The stiffest remaining regular season test for this group comes tonight in College Park as the Badgers take on Maryland.

· Maryland (22-5, RPI 11): After dropping three of five, things have stabilized a bit for Mark Turgeon’s group as the Terps have won three in a row. A win against Wisconsin on Tuesday would go a long way in moving Maryland up the seeding list, but this team appears to be a lock for a top four seed.

· Michigan State (19-8, RPI 28): Suddenly, Michigan State is surging with four straight wins and the Spartans are closing in on “lock” status to make the field if business is taken care of at home the rest of the way (Minnesota, Purdue). Sunday’s win at Illinois was huge and trips to Wisconsin and Indiana remain as chances to further bolster the resume.

· Ohio State (19-8, RPI 43): The Buckeyes took a tumble in the computers following a loss Sunday at Michigan and while this group remains in solid position, it’s still too early to proclaim lock status for a NCAA bid because of an awful non-conference schedule. The Buckeyes finish with three of their final four games at home, but two of them come against Purdue and Wisconsin, which won’t be easy.

· Iowa (17-10, RPI 55): The Hawkeyes rebounded from a brutal week by throttling Rutgers and Nebraska. Neither win strengthens the resume, but avoiding bad losses this time of year is pivotal and that’s exactly what Iowa did last week. The Hawkeyes host Illinois on Wednesday night and the game is crucial for both teams as Iowa is just off the bubble and Illinois is squarely on it.

· Illinois (17-10, RPI 58): Illinois only played once last week and the Illini shot horribly in a home loss to Michigan State. Illinois will likely have work to do in the Big Ten tournament to solidify a bid unless it can win both of its remaining home games (Northwestern, Nebraska) and one of its remaining road games (Iowa, Purdue).

· Purdue (18-9, RPI 61): Purdue came up with a huge win at Indiana last week that put the Boilermakers in the field for right now. If not for losses to Gardner-Webb and North Florida in the non-conference season, Purdue would be looking at a very good NCAA tournament seed based on its work in the Big Ten. Still, if the Boilermakers can just split their final four conference games (Rutgers, at Ohio State, at Michigan State, Illinois), they’re likely in the field.