Mike Davis all smiles in return to Bloomington 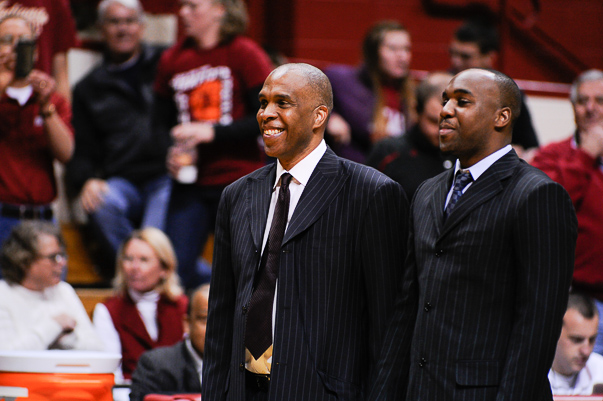 As Mike Davis prepared to walk onto Branch McCracken Court 12 minutes before tipoff on Monday night, the former Indiana coach looked up and smiled.

The long, winding road the 54-year-old Texas Southern coach has endured had taken him back to Bloomington — the place where his head-coaching career began more than 14 years ago.

His trip onto the Assembly Hall floor slowed as he reminisced with former co-workers. By the time he finished the pregame greetings, the buzzer signaling the end of warmups blared. He still was smiling.

“It’s just great to be back,” Davis said. “I wanted to bring my family back. Indiana has shown so much love for me. I’m where I am today because of Indiana basketball.”

When Davis resigned as the Indiana basketball coach after the 2005-2006 season, after six rocky seasons that included an NCAA Final Four trip and two seasons of missing the NCAA tournament completely, Davis’s career went on. Though he went on to coach UAB, a Conference USA school, and now Texas Southern, a SWAC school, he said he held no animosity against Indiana.

Davis has said he believes he would never have had neither the UAB nor Texas Southern jobs if not for his time at Indiana. In his mind, he is grateful for his time spent in Bloomington.

On Monday night, during on-court introductions, public address announcer Chuck Crabb introduced Davis as the former Hoosiers coach — the first to ever take the opposing sideline against Indiana in Assembly Hall. As the crowd rose to its feet, giving Davis a standing ovation, he rose his right hand and turned around to acknowledge the Hoosiers faithful.

His smile was as big as ever.

“Them coming out and giving me a ovation,” Davis said, “I really owe them a standing ovation for what they have done for me and my family.”

Davis’s sons still refer to Bloomington as “home.” His oldest son, Mike Jr., continued to make trips to Bloomington even after his father’s departure as head coach. Davis’s youngest son, Antoine, cried because he missed Bloomington so much.

In the days leading up to Monday’s game, Davis admitted he already was looking past his team’s season opener at Eastern Washington. He was ready to get to Bloomington. And following Monday’s game — despite his Texas Southern team losing, 83-64 — he said he wanted to stay in Bloomington longer.

During Davis’s postgame press conference, in which he continued to express his gratitude to Indiana, he was asked whether he would consider rescheduling Indiana in Assembly Hall during future seasons. He quickly replied, “hopefully my son can play here one day.”

Davis is hoping Indiana will one day recruit Antoine, now in ninth-grade. He even mentioned he would want part of his family to relocate to Bloomington if Antoine eventually plays for the Hoosiers. He still treasures everything about his time at Indiana.

“I owe Indiana way, way more than anything,” Davis said. “Just so excited to be back. I was talking with Fisch before the game.”

He cracked a smile.

As his press conference wrapped up, Davis greeted several reporters who covered the team during his time in Bloomington. He referred to them by their first names, engaging in conversation.

By the time he walked out of the doors, one last thing was apparent. Mike Davis was smiling.