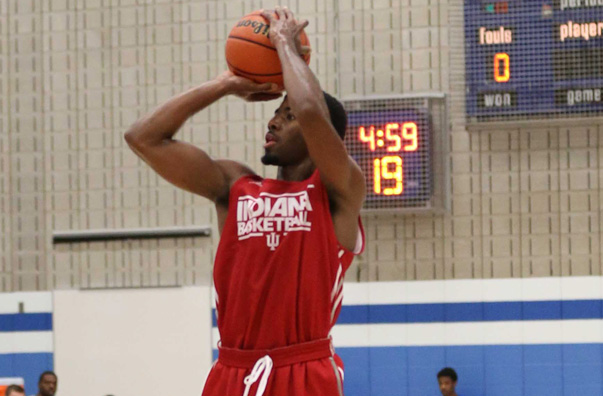 Indiana freshman guard Robert Johnson had a strong start to his college career as he averaged 9.8 points, 4.6 rebounds, 3.8 assists, 2.2 steals, 1.6 turnovers in 24 minutes per game during IU’s five-game tour of Canada.

The Richmond (Va.) native recently spoke to IUHoosiers.com about the start of the fall semester, the benefits of IU’s foreign trip and more. The complete Q & A is available below:

On how school and workouts have been thus far:

“So far I think it’s been good for the team with workouts, weight lifting, conditioning and all things like that. Moving forward, everybody’s starting to take it to a second gear. Class is good, everyone’s pretty much adjusted by now so we’re just trying to keep the wheels rolling.”

On what makes Indiana such a special place:

“One of the main things by far is the support. Anywhere you go, you have people saying they can’t wait to see you play and they expect highly of you and they’re behind you no matter what. When you have fans and support like that, it just makes you want to work that much harder so you can have a successful season.”

On the importance of Cook Hall in your development:

“I think it’s like a second home now. I’m in here two or three times a day at least getting work in, getting shots up and that’s something I just love to do. I think it’s helping me raise my game and get better everyday so I think it’s good.”

On if your expectations are being met in terms of why you chose Indiana:

“Most definitely, I think so. Like I always said, the main reason I came here was Coach Crean and his vision for me, the plan he had for me and how he was going to make me a better player. The things we’re doing right now are all examples of that. It was the right decision.”

On the benefits of the trip to Canada:

“It’s all about getting some type of experience. Obviously, it’s not the Big Ten and at that level, but we did play some pretty good teams up there. It allowed us to get our feet wet, especially the new guys so I think it was a good experience for us and helps us moving forward.”

On the pushing your teammates and being pushed:

“One of things about our team,, is we are really competitive with each other. So James (Blackmon) and I when we are in the gym together, we’re always trying to beat each other at one thing or another. I think that’s an example of how we push each other to get better. I think at the end of the day, it’s going to make both of us that much better and harder to play against.”

On what your favorite class is:

“I would probably say my `What is America?’ class because it’s based on food.”

On what your favorite Bloomington restaurant is:

“I would probably say the Village Deli because I like breakfast and they have pretty good choices.”