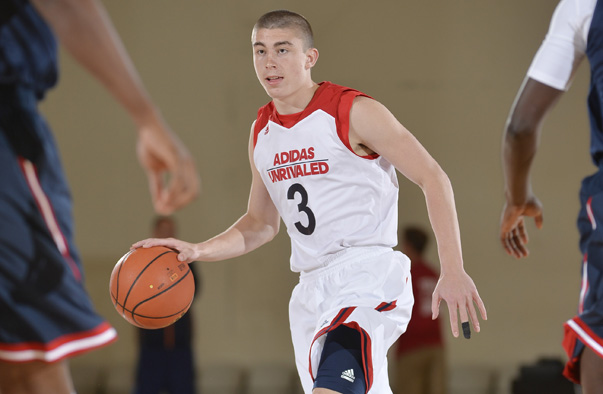 The 6-foot floor leader was one of the standouts on the adidas Gauntlet circuit for Team Fast and he also participated in national events like the NBPA Top 100 camp, the adidas Unrivaled camp and the tryouts for USA Basketball’s U17 World Championship team.

In addition to those experiences, Pritchard also had the opportunity to visit several of the schools that are involved in his recruitment, including Indiana.

The trip to Bloomington came back on May 19, the day after the adidas Gauntlet stop in Fishers wrapped up.

“I really like Indiana. I think their interest level has been high,” Pritchard told Inside the Hall from the USA Basketball training camp in Colorado Springs. “Maybe later this year I’ll get a chance to take another visit. I enjoyed the visit a lot when I went out there. Great coaches, great program.”

Pritchard’s offer list, which was only at five when we spoke to him back in May, has grown considerably recently. Since early June, he’s received offers from Xavier, UCLA, Virginia and Florida State.

He also took several other unofficial visits in addition to the one he took to Bloomington. Among them: Butler, Wisconsin and Virginia.

“I enjoyed it a lot,” Pritchard, the No. 36 prospect in his class according to the 247Composite, said. “I got to see each school I like and get a feel for which colleges I may want to go to.”

In our interview with Pritchard back in May, he mentioned the Big Ten and PAC-12 as two leagues that interest him.

“I’ve always wanted to play in the Big Ten, but the PAC-12 is a big time conference, so I wouldn’t mind playing in that,” he said. “But I feel like a lot of Big Ten schools fit my style of play. I’m just visiting a lot of schools and just trying to see what I like best.”

Earlier today, USA Basketball announced the 17 finalists for its U17 World Championship team, a list that didn’t include Pritchard, who was among the 33 invited to try out for the team.

Despite being cut, the experience of playing against the nation’s best point guards like Dennis Smith Jr. and Derryck Thornton, is one that Pritchard knows will ultimately elevate his game.

“It’s been great competition. Just competing against the best, you get better every day,” he said. “You’re working outside your limits, so it’ll make you better. For me, I feel like I’ve improved on picking up people full court and being able to stay with them on defense.

“You take what everybody does well and try to implement it into your game. All of these guys are the top guys, so what you’ve been working on, you’ve got to be able to do it against them.”