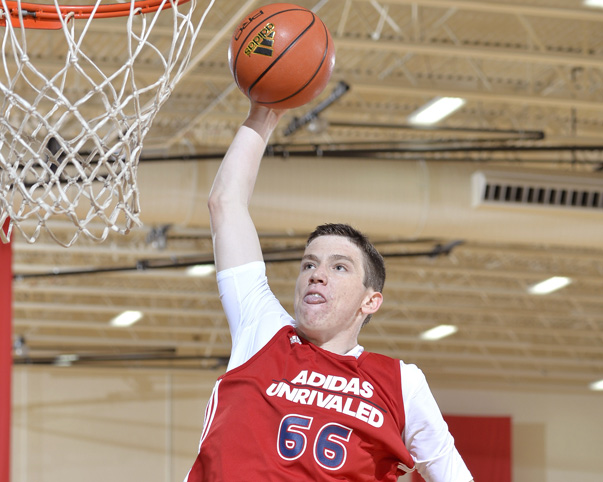 REDONDO BEACH, Calif. — 2016 forward and longtime Indiana target T.J. Leaf has recently seen an explosion in his recruitment. Just in the past week, the 6-foot-9 junior, the No. 18 prospect in the 2016 class according to the 247Composite, has received offers from Florida and Louisville.

On Thursday, Inside the Hall caught up with Leaf at Battle at the Beach after he recorded 31 points, five rebounds and three blocks in two evening games for Compton Magic Elite in front of multiple college coaches — including Indiana associate head coach Tim Buckley.

Our full conversation with the Foothills Christian (Calif.) forward is posted below:

Earlier this summer, you talked about hoping to become more of a wing player. How do you feel that adjustment has gone, so far?

“I think I’m definitely evolving my wing skills to be more of a 3-4 instead of a 4-3. So I think I’m doing a pretty good job of that.”

What other parts of your game have you been working on recently?

“Just continuing to get healthy, a consistent jump shot, those are pretty much the main things. And then just continuing my wing skills and dribbling.”

Your first game tonight, your team won by 20 points. How were you feeling out there?

“I felt pretty good. I mean all our guys got to play a lot, so it’s good for everyone to get looks out there in front of the college coaches.”

What are your thoughts on the tournament, thus far?

“I think it’s a really good event. There a lot of really good teams out in the West and there’s no brand, so any team can come play. And I think that’s nice.”

What colleges are coming at you the hardest, right now?

Are you expecting any new offers on the horizon?

“I think Michigan State and Duke might offer soon. They’re obviously both great programs and they both have great coaches.”

Do you have any list of top schools at this point?

“No, but I might be releasing one in mid-August. I’m not sure yet.”

Do you have any planned visits at the moment?

“Yeah, I’m taking one to Arizona and Arizona State in the beginning of August. Not sure on the exact dates, though.”

How often has Indiana been in touch with you, recently?

“Quite a bit, just as much as everyone else. I mean, they keep in touch with me five or six times a week.”

What about Indiana’s pitch has stood out to you, specifically?

“Obviously, they’re a great program and I like how coach Crean says he’s going to use me, kind of as a 3-4 who can get the defensive rebound and be able go all the way with it and just play the wing a lot. That’s definitely an attractive option.”