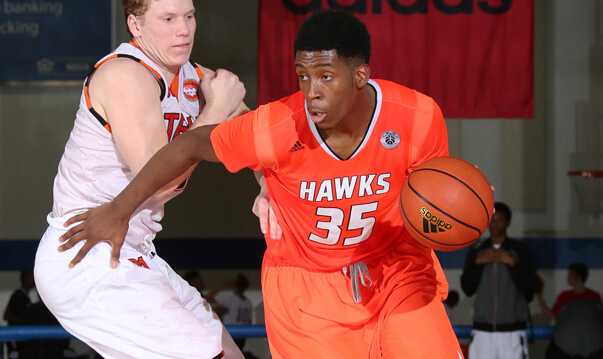 REDONDO BEACH, Calif. — During an interview on Thursday following a game at Battle at the Beach, 2016 power forward Aurora (Colo.) De’Ron Davis was asked which schools are recruiting him the hardest at the moment.

His face lit up.

The 6-foot-9, No. 22 prospect in his class rattled off a list of high-major programs that included Arizona, Louisville, Indiana, Kansas, UCLA, Duke and California.

“It’s pretty much all I can ask for,” he said. “I’m just taking it all in and enjoying it right now.”

Davis and the Colorado Hawks flew into Las Vegas on Thursday and drove five hours to Redondo Beach, making it just in time for a late-evening game against the Las Vegas Knicks.

And utilizing his physical advantage, Davis scored 15 points and grabbed eight rebounds in front of Indiana associate head coach Tim Buckley and other college coaches for a 60-56 Hawks win.

“I’m always having a good time out there, but at the same time you’ve got to look at the big picture,” Davis said. “Like if I play a team without a big man, post up. But if I play a team bigger than me, I’ve got to show my outside game. It all depends, really.

“I just like helping my team and doing whatever I can to get the win.”

Plenty of other schools have taken notice of the five-star big man in recent weeks, too. In addition to the seven schools he mentioned, Colorado, Arkansas, Wake Forest and Purdue are other schools recruiting him hard, he said.

Davis said he speaks with Indiana about twice per week and that he enjoyed his visit to Bloomington earlier this summer. And to him, the Hoosiers are an attractive school as any, at the moment.

“Well the fact that they produce NBA players is the biggest thing,” Davis said. “I talked to (Je’Ney Jackson) and he turns boys into men. And my ultimate goal is to get to the NBA, and that’s what they do.”

But in the mean time, Davis said he is continuing to work his game — improving his motor, his ball-handing and his outside game.

Above all, though, he simply is enjoying his recruitment.