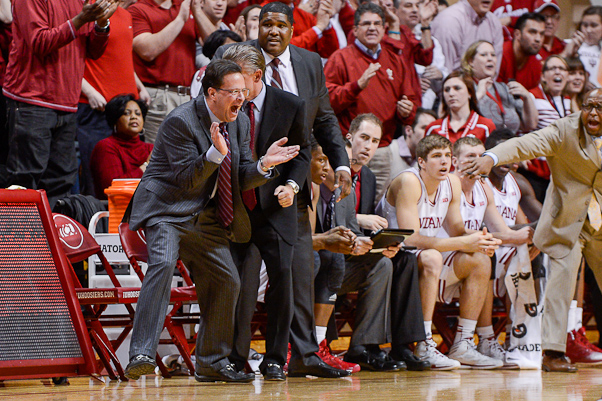 Indiana is the only Big Ten school to earn a perfect APR score in men’s basketball in each of the last four years.

BLOOMINGTON, Ind. – After inheriting a program that would be put on public notice for poor APR performance in 2009, Indiana University men’s basketball coach Tom Crean has seen his program earn a fourth straight perfect score of 1,000, the only Big Ten men’s basketball program to achieve such success according to the NCAA’s most recent multi-year Academic Progress Rate report released May 14.

“Academic success is a critical component to thriving as a true student athlete at Indiana University,” said IU coach Tom Crean. “Our staff and Marni Mooney deserves the bulk of the credit for keeping our guys on task daily. When you measure our APR, record of graduating players and the academic awards and honors our players have received recently, we believe we are as strong in this area as anyone in the country.”

The Academic Progress Rate is a real-time measure of eligibility and retention of student-athletes competing on every Division I sports team. Last week, the NCAA recognized the men’s basketball program with its second straight APR Public Recognition Award, which is given to high-performing teams that posted multiyear APRs in the top 10 percent of all squads in their particular sports.

In May of 2009, the IU men’s basketball program was well below the national average, ranked 325 out of 341 Division I schools. The Hoosiers received an APR score of 866, down almost 70 points from the national average of 933 and also under the NCAA’s minimum limit of 925.

Confidence in Crean’s ability to move the program forward was never in doubt.

“We took the public notice very seriously,” IU Vice President and Director of Athletics Fred Glass said. “The poor academic performance for which we were being cited for occurred under two coaches prior. Tom Crean’s leadership and commitment to academics, allowed us to put our issues fully in the past in exemplary fashion.”

The Hoosiers are 73-31 during the last three years and were ranked No. 1 in the country for the majority of the 2012-13 season. Their 2013 Big Ten championship was its first outright league title in 20 years.

Indiana has defeated a national best 10 programs ranked in the top 10 in the last three years and also leads the Big Ten with 15 regular season wins against the Top 25 in that same span.