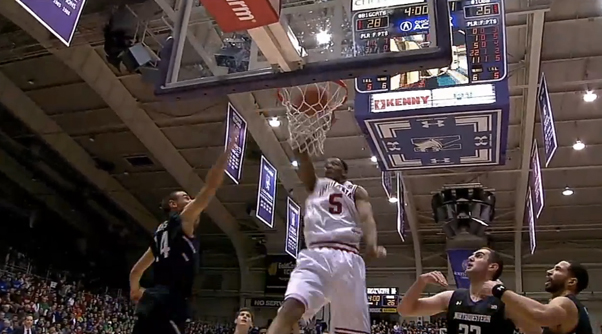 EVANSTON, Ill. —  After all the tumult over the last week-plus, just what Indiana team was going to show up inside Welsh-Ryan Arena tonight was anybody’s guess.

As it turns out, the Good Hoosiers made an appearance for much of this one. And so they avoided the second half breakdown, one that has plagued them on the road in conference play, hanging on for an important victory on the road and perhaps even gaining some confidence for the home stretch in the process.

The Wildcats, after zoning Indiana up for much of their win in Bloomington, decided to go man on Indiana in the first half. The Hoosiers, with more space and seams, went to work on the drive and on the offensive boards (42.1 percent offensive rebounding percentage). More than half (18) of their 32 first half points came in the paint. 10 of their 32 points came on second-chance opportunities,  as Troy Williams (two) and Noah Vonleh (one) had tip-in slams. The offense scored 1.13 per possession.

But Indiana’s defense wasn’t exactly sound, as their option to go zone allowed Northwestern some looks from beyond the 3-point arc (4-of-10, 40 percent). Alex Olah, on two bum ankles, played well (5-of-8 for 12 first half points) and the Hoosiers entered half up only two points (32-30).

Indiana was able to extend the lead all the way up to 12 coming out of halftime on the back of a 12-2 run. Northwestern went cold, Drew Crawford missed a few shots at the rim, and Indiana kept going to work against Northwestern’s man-to-man defense. But Chris Collins finally decided to go zone against the Hoosiers as the game seemed to be getting away from his Wildcats. During a stretch of five minutes and 45 seconds between a Will Sheehey lay-in at 14:28 and a 3-pointer from Yogi Ferrell at the 8:43 mark, the Hoosiers failed to score a field goal, though they got into the bonus during this timeframe and hit some free throws.

But Indiana would begin to find some success against the zone with good ball reversal and working the middle. Will Sheehey hit two buckets in the middle of the zone in the paint. Vonleh, who can often have trouble establishing himself against a packed-in zone, scored on a lay-up. A Tre Demps lay-up with 2:21 cut Indiana’s lead to four, but that was as close as Northwestern would get.

Williams — who finished the game with 12 points on 5-of-7 shooting  — streaked in out of the left corner and Vonleh found him off the perimeter for a lay-in a few possessions later.

“He played fast but he didn’t play in a hurry,” Tom Crean said of Williams’ zero turnover performance.

Will Sheehey splashed a 3-pointer on Indiana’s next possession to extend the lead back out to eight. After falling apart on the road the last couple tries out, Indiana finally made things happen when it mattered.

“Those were big plays at crucial times,” Crean said.

Indiana turned the ball over just seven times for a turnover percentage of 12.6, both season lows.  A few more silly turnovers like we’ve seen over and over again this season, and this one might have turned out differently. But Indiana made smart decisions with extra passes in both halves and it led to possessions with points on the end of them instead of the ball in Northwestern’s hands. It was also a balanced offensive performance. Instead of Ferrell having to do so much work, four Hoosiers (Vonleh, Sheehey, Ferrell and Williams) scored 12 points a piece.

“They never flinched and I think that’s the most important thing,” Crean said of his team having to deal with the postponement of the Iowa game and switching gears to prepare for the Wildcats.

A rough week of Wisconsin, Iowa and Ohio State awaits Indiana on the other side of this one. The less flinching, the better.