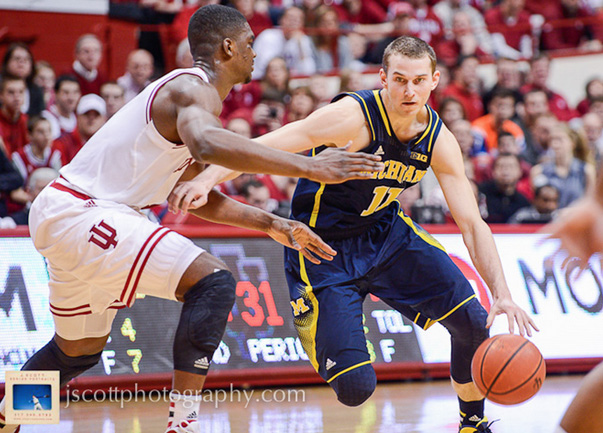 Preceded by teams that ranked fourth and third in offensive efficiency the past two years, Indiana ranks just 174th in the country this season. After losing four 1,000-point scorers to graduation and the NBA draft, the offensive struggles of the 2013–2014 Indiana Hoosiers have been frequently discussed.

Still, the team finds itself sitting in the middle of the pack in an unpredictable Big Ten conference season and with postseason hopes still intact. At 4–6 in the conference, Indiana has only lost one league game by more than seven points and is just a game and a half back of Ohio State and Wisconsin, who are tied for fourth place. Indiana’s defense has provided stability this season and it must continue to do so if the Hoosiers hope to finish at .500 or better in league play and give themselves a shot at making the NCAA tournament.

Starting with the conference season, Indiana’s defense ranks eighth in effective field goal percentage, fifth in points per possession, sixth in turnover rate, and first in assist rate allowed according to KenPom.com. It is interesting to note that the Hoosiers are the best in the league in terms of assist rate allowed, despite being average in the other categories on the whole. Generally speaking, a defense is better if it forces opponents to take unassisted shots, but this is not an absolute truth. 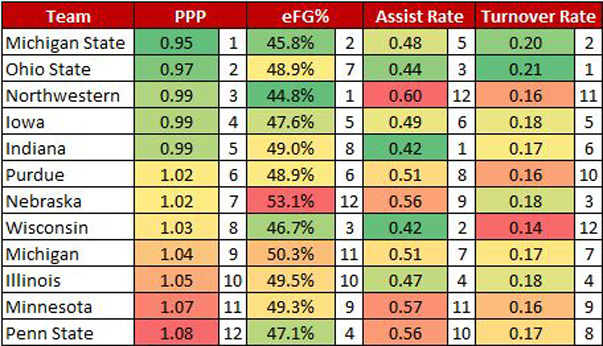 In its first four conference games, IU allowed 76 points per game; since then, the team has given up 58.2 points per game and has only allowed one opponent to score more than 70 points. In this stretch, the team has opted to slow the pace of play down — a stark contrast from the past two seasons — and play a more “grind it out” style of basketball. The slower pace may also be attributed to Big Ten opponents doing a better job of not letting Indiana leak out in transition as easily as it did in the non-conference slate. Indiana is averaging 64.2 possessions per game in Big Ten play, which ranks eighth in the league.

It may seem arbitrary to select the past six conference games to analyze, but the change in defensive performance during this period is overwhelming. It is actually possible to show, by way of statistical tests, that the team is playing better defense during the past six games than in the previous four. That is, there is a real and measureable difference in Indiana’s defensive efficiency in the past six games.

Defensive efficiency is most commonly measured by points per possession, and for the last six games of the conference season Indiana has been stellar, holding five of its six opponents below their conference season average. 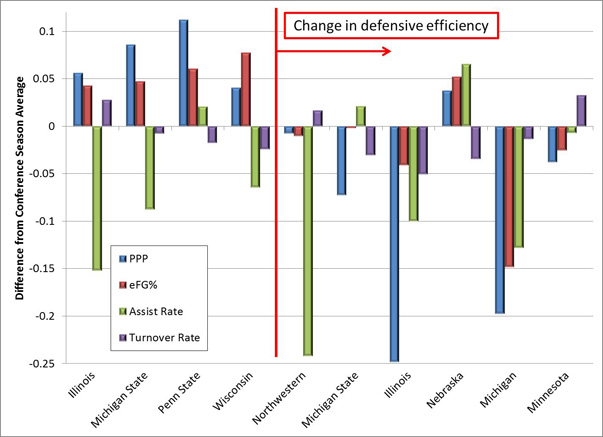 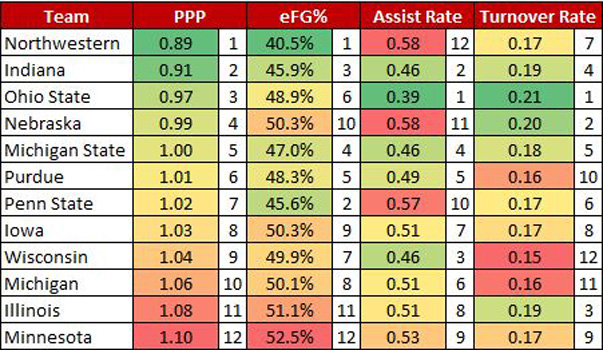 A recent article by Ken Pomeroy documented the very strong correlation between a “slow” defense and a good defense — essentially saying that if a defense forces its opponents into longer possessions, it usually correlates to a strong defense. A slow defense is good enough that opposing offenses can’t find quick shots and are often forced into more contested looks late in the shot clock. Indiana’s defense ranks fourth in the conference overall in terms of average defensive possession length, and still the Hoosiers seem to be getting “slower” as the season progresses. 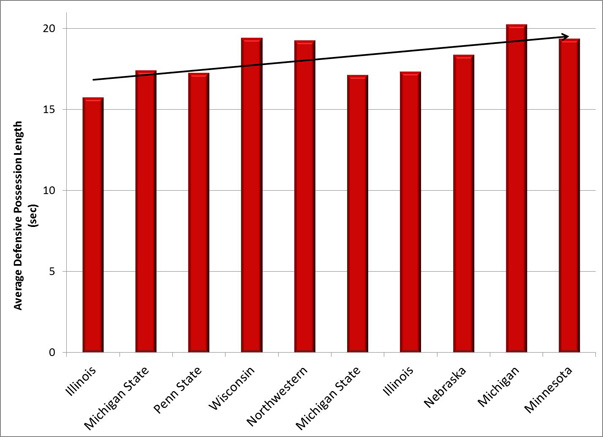 There is a somewhat noticeable trend upward as the conference season goes on, and a regression test confirms this trend with a confidence level of 95.8 percent. As the Hoosiers have slowed down the tempo on the offensive end, there are fewer opportunities for defenses to get easy transition looks. This helps ensure that Indiana can get into a set defense, where they have excelled. Additionally, the coaching staff has thrown in a fairly regular mix of man-to-man and zone looks, which forces opposing offenses to adjust on the fly, usually leading to longer possessions.

Considering the various metrics presented here, there is compelling evidence indicating a significant shift in defensive performance. Whether it was strategic adjustment by the coaching staff, a pure increase in effort, or a youthful team hitting its stride, there is no doubt Indiana’s defense is becoming dominant — and just in time.

KenPom’s defensive efficiency rankings have Indiana currently fourth in the Big Ten for the entire season, which matches the end of season ranking for last year’s squad, a unit that featured Big Ten defensive player of the year Victor Oladipo. With all the frustration of a young team that is last in offensive turnover percentage and just eighth in offensive efficiency, it is encouraging to see that Indiana is still the class of the Big Ten in the defense and hustle categories.

Coupling a stellar defense with the incoming recruiting class that features shooters and pure scorers, the future looks bright for the Hoosiers. Still, there is much to look forward to this season as the NCAA tournament looms and Indiana tries to ride defense to the Big Dance.