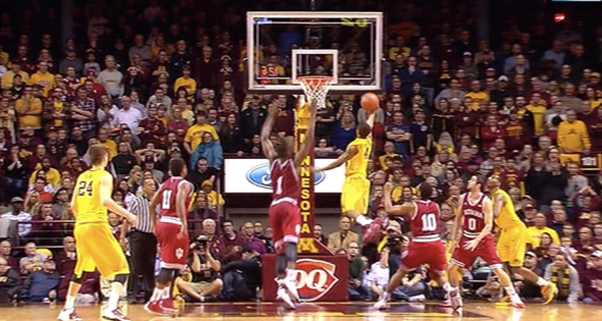 The record skips once more on the road in the second half, and with it came another loss in a game Indiana controlled.

This was a near repeat of the Nebraska game. A  strong offensive first half from Indiana and a lead at the break, followed by a meltdown over the final 20 minutes that leaves you shaking your head. The Hoosiers had Troy Williams go to work right away on Joey King. He scored Indiana’s first nine points. Whether zone or man-to-man, Indiana didn’t have much issue with Minnesota’s defense and scored 1.09 points per possession in the first 20. Jeremy Hollowell was active and engaged.

They cleaned up the glass on the offensive end and got second-chance points. Yogi Ferrell pumped in 10 of his own. The Hoosiers withstood two 7-0 runs from Minnesota and limited time from Noah Vonleh, who sat the last 9:21 of the half with two fouls, to take a 36-30 lead into halftime. They turned the ball over just five times. The Barn rarely sprung to life.

But in the second half, the script flipped. Troy Williams turned the ball over on Indiana’s first possession — after he turned the ball over late in the first half — and that would set the tone. Eleven turnovers in the second half saw Indiana’s turnover percentage balloon to 25.2 percent for the contest, as it wasted possession after possession. Stanford Robinson (three turnovers, zero points) fumbled the ball away in the lane on a few occasions. Noah Vonleh (three turnovers) had issues passing the ball out of the post.

Minnesota’s defense got into the Hoosiers much more in the second half, got a bit more handsy, a bit more physical and Indiana just couldn’t counter. Minnesota got some good looks on pick and rolls down the middle of the lane, got some luck (banked 3-pointer) and DeAndre Mathieu’s (16 points, five assists) speed gave Indiana some issues.

The Hoosiers were often a mess on offense, letting the shot clock sputter towards zero with little idea of what to do. The temperature got hot, the Barn got loud and the road remained a rough place for these young Hoosiers. They tried working it to Vonleh more and he was able to get some late buckets, including a pretty face-up score and a steal and score to cut the a four-point lead to 62-60 with 36 seconds to go.

Indiana made the decision not to foul Minnesota and let things play out, but Mathieu was able to shake free of Evan Gordon and get around Vonleh’s at the rim to score with just under 12 ticks left. Ferrell pushed the ball up and drew the defense on the right wing, which left Gordon open on the left. He overshot a 3-pointer, his only attempt from distance all game. That about sealed it.

This one was talked about as a must-win because Indiana needs some road wins to reach 9-9 in conference play, the seeming magic number for a spot in the NCAA tournament. It was there to be had tonight and they let it slip away. Decent chances remain against Purdue and Northwestern away from Assembly Hall, but that’s going to take a full 40 out of Indiana.

Can they do it? We’ll learn in due time.