The Minute After: UConn 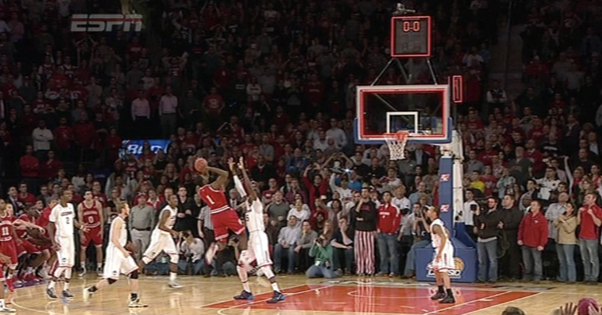 We know this team is young and prone to mistakes. That nights like tonight were bound to happen, a game the Hoosiers could have had but let slip away because of turnovers and youth and inexperience.

Still, it makes it no less easy for fans to swallow.

The Hoosiers have had problems so far this season taking care of the ball (19.3 turnover percentage, 219th in the nation). And it was exposed in the first half — badly. They coughed the ball up on 34.1 percent of their possessions, UConn taking advantage of their uptempo style and penchant for driving into the lane in the halfcourt.

The angles closed faster, the quicker, more athletic defenders of the best team IU has played this season made the Hoosiers look sloppy when the wounds weren’t being self-inflicted. After posting 50 points on 1.37 points per possession in the first half against Washington last evening, Indiana entered the break scoring just .8 points per possession and 24 overall.

And then there’s the case of Noah Vonleh. After such a dominant first five games, Vonleh was a non-factor tonight (0 points, two boards, four turnovers). He picked up two fouls in under two minutes to start the game and had to sit. The 18-year-old didn’t see much playing time in the first half due to the fouls. Just a minute and 13 seconds in the second half, there was Vonleh picking up his third foul.

When he re-entered again mid-way through the second half, the Hoosiers got him the ball on the block and he seemed determined to score at all costs. But Vonleh was overzealous, using his forearm too much to back his defender down … and he was flagged for an offensive foul. Vonleh entered again later and fumbled a sure rebound off his hands on a missed UConn free throw. By this point, it seemed like it was mental.

Despite all the IU turnovers, the Hoosiers were still very much in this one at the break, as two late 3-pointers from Shabazz Napier had the Huskies up six. UConn barely saw the line by half (2-of-2). And after shooting so hot from beyond the arc to start the season, it went cold from the perimeter in the first 20 minutes (4-of-12).

The second half was a back-and-forth affair. Shabazz Napier was a tough cover, his shimmying and shaking to create space for jumpers is no easy task to guard. Despite his seven turnovers (and a key late one that turned the ball back over to the Hoosiers and gave them a shot at the victory), he ended the night an efficient 10-of-14 (27 points) and scored UConn’s last four points. Evan Gordon played perhaps his best game of the season, looking like the senior he is amidst all the IU youth. He hit a couple of key buckets in the second half to keep this one close (3-of-3, six points).

Yogi Ferrell didn’t shoot it all that well tonight (6-of-19, 19 points), but he also came up big at times in the second half and made the offense go as much as he could. UConn made a strong emphasis to try and keep him out of the lane and out of the pick-and-rolls as the second half wore on.

Despite two turnovers in the final 1:08 of the game by Devin Davis (and a woeful 28.8 turnover percentage for the game), the ball was in Indiana’s hand to try and win this one. Ferrell missed a jumper, the ball fell to Jeremy Hollowell. It was knocked away and ended up as an out of bounds call on the Huskies with .7 remaining.

Indiana’s final play was apparently looking for a lob first, then a catch-and-shoot. There was no lob open for Troy Williams, so Vonleh got the ball on the left high post. But he didn’t even get the ball off in time.

It capped off a forgettable night under the lights at Madison Square Garden for the freshman and chalked up Indiana’s first loss of the season.