The Minute After: LIU Brooklyn 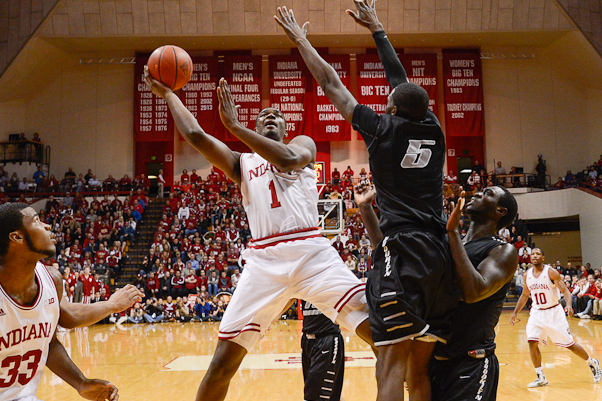 Thoughts on a 73-72 win over the Blackbirds:

Outside shooting is no longer an advantage for this team. At least not at this point in the season. So the Blackbirds, a smart, disciplined team — one that’s gone dancing the last three seasons — had a good gameplan. Pack the paint. Dare the Hoosiers to shoot. (And don’t let them get out on the break for easy buckets, either.) The Hoosiers took the bait. They fired from distance all first half, 16 in all. Many came early in the shot clock, some off just a pass or two. But they weren’t bad looks per se; Indiana was taking what the defense was giving. They just couldn’t buy a bucket. There were some long, bad bricks.

Only one would find the bottom of the net — IU’s first attempt from Yogi Ferrell early in the half. LIU Brooklyn’s interior defense also fared much better than Chicago’s State on Friday. The Blackbirds held their ground around the bucket and Indiana often found itself in the air with nowhere to go. (The Hoosiers turned the ball over on 19 percent of their 73 possession tonight.) The visitors would enter half with a 36-33 lead, and the late-arriving Assembly Hall faithful wasn’t expecting this.

The Blackbirds zoned up the Hoosiers for the majority of the second half, asking Indiana to keep shooting. But Indiana’s offense would fare much better. (They got three easy looks in a row to start the half and hit 6-of-10 from distance.) Thing was, Blackbird point guard Jason Brickman was a tough cover (11 points, 10 assists, five boards). And just when it looked like the Hoosiers were about to carry some momentum out to a comfortable lead, big shot after big shot kept falling for LIU-Brooklyn. And these new rules, the ones the Hoosiers exploited on their way to 55 free throw attempts on Friday against the Cougars, started working against them in the second half. The Hoosiers attempted just three free throws in the final 20 minutes to the Blackbirds’ 14. For the night, LIU Brooklyn would sport a much higher free throw rate (FTA/FGA) than IU (49.0 to 23.9).

Jeremy Hollowell picked up four fouls. Devin Davis did, too. Ferrell picked up a fourth foul at the 7:35 mark. His frustration carried over onto the sidelines as he slammed the scorer’s table in disgust. LIU Brooklyn hit back-to-back 3-pointers on their next two possessions. It led 61-58 with 7:02 to go. Indiana’s best two ballhandlers were on the bench. Doubt set in.

But the Hoosiers had some big plays of their own in their back pocket. Noah Vonleh, who finished the night with another double-double (17 points, 11 boards) hit at the cup. Troy Williams, who seemed to take a back seat to Evan Gordon for stretches in the second half, hit a 3-pointer and a turnaround one-handed jumper. And then Will Sheehey helped seal it, though a late Brickman heave — and a questionable timeout call granted to LIU Brooklyn late as Brickman was losing the ball — made sure the Blackbirds were in it to the very end. Sheehey ended the first half in awful fashion (0-of-8 from the field, 0-of-6 from distance).

But he hit back-to-back 3-points with less than three minutes to play. The first tied the game at 70. The second put the Hoosiers up 73-70 at the 1:55 mark. It would be the last points they’d score, as a late Vonleh tip-in with 33 seconds to go rimmed around and out.

On a night where the Hoosiers looked in peril as their flaws were exposed, IU’s two starting freshman and its old-guard senior had saved the day late.