What to Expect: Hillsdale College 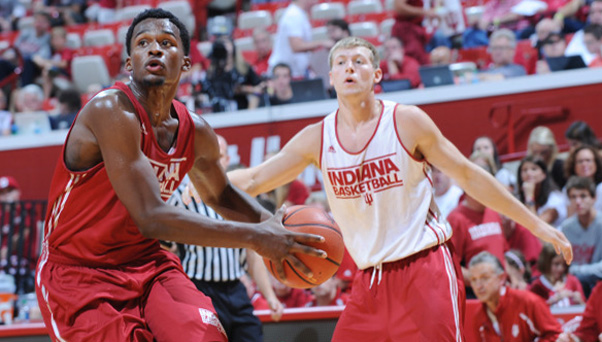 In a final tune-up before Friday’s season opener against Chicago State, Indiana will host Division II Hillsdale College tonight in Assembly Hall. It will be the first ever meeting between the two programs.

The game will be broadcast live on the Big Ten Digital Network at 7:00 p.m and replayed on Tuesday at 8:00 p.m. on BTN.

With more than a full month of practice in the books and just four days to go until the season begins, we’re in the home stretch of the preseason.

As one of the Big Ten’s youngest teams, it’s tough to predict how this group will come out and play on a given night, but tonight is our final preview before the real games begin. The good news is that Indiana is expected to have every scholarship player available and that should give us a better idea of how the rotation is coming together.

Hillsdale College already has a pair of exhibition games in the books: A nine-point loss to Valparaiso and a one-point loss to Toledo. The Chargers finished last season 17-10 and return four starters.

Rather than our traditional “what to expect” preview that includes an in-depth look at the opponent and tempo-free analysis, this exhibition version will focus on what we’ll be watching for from the Indiana side of things:

· Our first look at Stanford Robinson and Devin Davis: We had the opportunity to see Robinson in both public scrimmages and Davis in the Hoosier Hysteria scrimmage, but this will be the first game action for both players.

Robinson was outstanding in the Haunted Hall scrimmage and has the ability to push for a spot in the lineup as the season moves along. Indiana’s backcourt depth is one area that’s been talked about quite a bit in the preseason, but if the Hoosiers can establish a three-man rotation of Yogi Ferrell, Evan Gordon and Robinson while also mixing in Jeremy Hollowell or Troy Williams, the backcourt can quickly become one of this team’s biggest strengths.

As for Davis, we’ve heard a lot about his energy in the preseason, but tonight is the first look at how it can potentially make an impact. Davis isn’t a guy you slot into one position, he’s a player with the ability to defend and play multiple positions and that versatility could make him valuable.

· The turnovers: Scrimmages and exhibitions shouldn’t be taken too seriously from a statistical standpoint, but one thing that has stood out in the preseason is IU’s turnovers.

One of our offseason critiques of Yogi Ferrell was cutting down on the turnovers (24.5 turnover percentage as a freshman) and the improved decision making must start with the sophomore point guard. Indiana will likely deploy the Big Ten’s fastest pace once again, so some of the turnovers will be symptom of how this team pushes the pace.

There is, however, a lot of validity in Tom Crean’s words when he talks about making the smart play rather than going for the home run play. Against inferior competition, Indiana will be able to overcome mistakes. But once the beef of the Big Ten schedule rolls around and the games slow down, the Hoosiers must avoid wasting possessions with careless play.

But how do the other frontcourt pieces fit into the equation?

Luke Fischer lost valuable preseason time due to a shoulder injury. Hanner Mosquera-Perea is looking to make a significant leap forward as he enters his second season. And Peter Jurkin missed time as he returned home to visit his father in the Sudan and appears to be on the outside of the rotation for now.

With Vonleh looking like a prime candidate to log significant minutes at the five, which of IU’s other frontcourt options will establish a presence in the rotation? There may not be a need for Fischer or Mosquera-Perea to play more than 10-15 minutes regularly, but Indiana needs one of the two to develop into a reliable contributor.