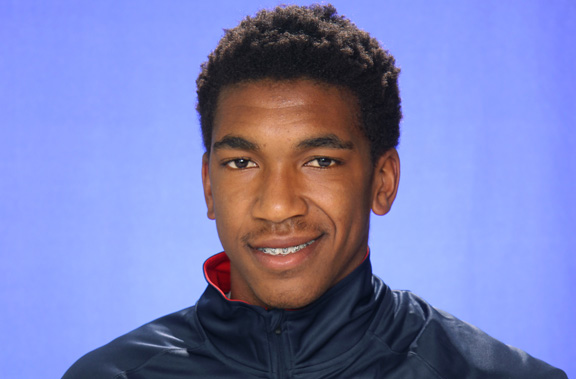 A consensus top 10 player in the class of 2016, it’s no surprise that Bentonville (Ark.) guard Malik Monk was selected to participate in the USA Basketball developmental national team mini-camp in Colorado Springs earlier this month.

Monk, who is already attracting major recruiting attention, performed well on the first day of the camp before suffering a thumb injury that forced him to miss day two.

“The first day I kind of overextended my thumb,” he told Inside the Hall on Oct. 6 from Colorado Springs. “Before I got hurt, I was doing very well, but I’ve got to get a long stronger.”

The 6-foot-3, 170-pound guard averaged 22.8 points, 4.6 rebounds and 2.7 assists per game as a freshman at East Poinsett County High, but moved to Bentonville for his sophomore season.

Monk’s older brother, Marcus, played at the University of Arkansas, which has already offered a scholarship. Baylor, Florida, Indiana, Memphis and Kansas have also offered.

“They’re very interesting,” Monk said of Indiana. “I like the program and they wanted me to come to Hoosier Hysteria, but I was up here.”

The No. 8 prospect in the 247Composite, Monk said he evaluates a variety of factors when looking at the schools who are recruiting him. When asked if the Hoosiers having two of the top four picks in the latest NBA Draft stood out, he confirmed that it’s a factor he’ll look closely at.

“I look at that (the NBA) and the coaching staff and the teammates,” he said. “That’s most of what I’m looking at.”

As he prepares for his first season at a new school, Monk is coming off a freshman season that was decorated with success. He was a freshman All-America honorable mention by MaxPreps.com and named to the 2013 Arkansas Class 2A all-state team and the 2A-3 all-district team.

Still, he believes there’s plenty of work to do as his career begins a new chapter at Bentonville.

“I’m working on staying low on defense and moving my feet,” Monk said. “And I’ve got to get stronger.”