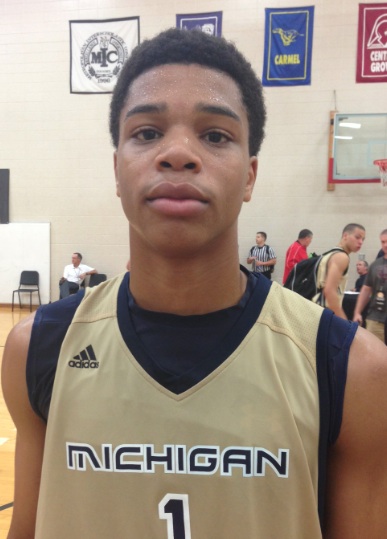 But after his performance at the event, where he was dominant at times for the Michigan Mustangs 16-and-under team, Bridges is on the rise nationally.

Scout.com national analyst Brian Snow named the 6-foot-5, 190 pound forward one of the top six performers at the event. With his combination of size, athleticism and strength, Bridges is difficult to contain. He acknowledged after a pool play game that he’s come a long way in recent months with his game.

He’s already visited Michigan State four times and Michigan once, but said that Indiana and Kansas share a unique distinction from the local schools he’s hearing from: They are his two dream schools.

“The crowd, I like the way the fans cheer them on. And I like the coaches,” he said of Indiana. “They work their players hard so they can get them ready for the NBA level. I want that.”

Bridges said Indiana has been one of his dream schools since he was 7. His father, Raymond Bridges, is a big reason why the younger Bridges has followed the Hoosier program.

“I think my Dad always wanted to go to Indiana,” he said. “He always talked about it.”

As a freshman, Bridges was named honorable mention all-state for Class A in Michigan. He said it’s possible that he’ll go to the prep school route beginning with his junior year — Huntington Prep in West Virginia was a school he mentioned — but he isn’t thinking much about a college decision at this point. (Update: It was announced Friday that Bridges will go to Huntington Prep next season.)