Notebook: Vonleh adjusts to life as a Hoosier 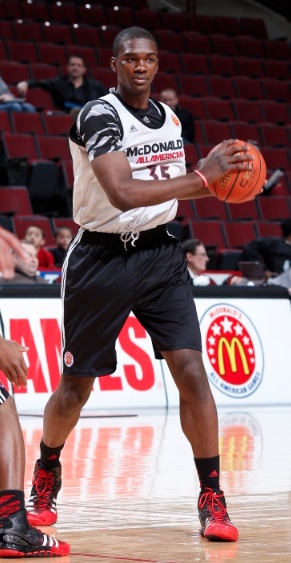 Ever since Noah Vonleh arrived on campus on May 29, the Indiana coaching staff has raved about the incoming freshman’s work ethic. Assistant coach Kenny Johnson went as far as to say Vonleh would move a cot into Cook Hall and sleep there if he could.

On Tuesday afternoon, Vonleh addressed the media for the first time as a Hoosier. The 6-foot-9 forward said he’s gained 20 pounds in the month and a half he’s been in Bloomington because of the team’s intense weight lifting workouts.

“I wasn’t used to that at prep school, so that was a big adjustment,” Vonleh said of the weight lifting. “I put on a lot of weight and am getting stronger.

“I just like to be in the gym all the time, getting better, getting my shot better because I’m going to be playing against a lot of guys that are a lot older than me next year.”

Vonleh recently participated in the LeBron James Skills Academy camp in Las Vegas as a college counselor. He was the youngest college player there (he’s 17 years old), but he managed to hold his own against some of the nation’s top talent.

“I went in there and worked hard,” Vonleh said. “I was talking a lot because a lot of the guys there weren’t really talking. [ESPN’s] Jay Bilas came up to me. He said, ‘Your leadership and talking can become a great strength if you keep working on it.'”

Vonleh and Bilas had an extended conversation in which Bilas told Vonleh to continue to work on staying low in the post, making his moves quick, and becoming more decisive when making a move.

Vonleh said he took those suggestions to heart and has worked on improving in those areas since he’s returned to the team.

“He’s a real good player,” sophomore forward Jeremy Hollowell said of Vonleh. “The biggest thing I’ve seen is that he’s willing to learn, he’s always wanting to improve his game, he’s coachable and just how hard he works day in and day out in practice. He’s always going to go hard and he’s always going to give it his best.”

Etherington not 100 percent, but close

Junior guard Austin Etherington isn’t yet back to full contact after fracturing his patella last December, but he continues to make progress in his rehabilitation.

Etherington said Tuesday he has been playing 1-on-1 and 2-on-2, and likely will be able to return to 5-on-5 participation after the team takes a break following the second summer school session next week.

Etherington has dealt with a major knee injury before, so the rehab process has been a bit smoother this time around.

“I feel pretty good. My knee’s feeling really good,” Etherington said. “I’d say the biggest thing is just the mindset. Once you’ve been through it, the big thing is just the mindset and being able to go out there and not worry about your knee. That’s something I have been better with. The first time I took a charge in workouts, it was one of the first steps in getting through the mindset because I knew that I could do it again and then not have to worry about my knee.”

Even though he wasn’t able to make an on-court impact for the Hoosiers after his injury, Etherington made the most of his circumstances. He hit the weight room hard and tested out as the strongest guy in the team at the end of the season.

Where have they gotten better?

· Jeremy Hollowell: “I think one-on-one scoring, my shooting and my ball handling have come on a lot,” he said. “I’ve been in the gym quite a bit this summer, definitely more than last year, so I know what to expect. Last season was a blur, it went by pretty fast, so just day in and day out, I’ve been working hard just trying to improve every aspect of my game.”

· Hanner Mosquera-Perea: “I feel like I have made a lot of improvement. I’m trying to step up because I’m going to have to do a lot of things for our team next year. I’ve been working really hard and I’ve been getting a lot better.”

Mosquera-Perea pointed to his timing on his jump shot as one major area he’s made a jump. That’s consistent with what we’ve heard throughout the offseason on him. The coaching staff said recently that Mosquera-Perea has been shooting the ball better, and Etherington echoed those sentiments on Tuesday.

“He’s putting in a lot more time,” Etherington said. “He’s working on his shot and everything he knows he needs to work on. After going through a year, you start to realize the things you need to do to improve and get on the court. I think Hanner has learned a lot. He’s been shooting the ball really well.”

· The freshman class: “They’re very athletic,” Etherington said. “Just them coming in has added so much athleticism to our team. Coach [Tom Crean] is always wanting us to be a fast break team and push the ball and there’s no better recruits than the guys we’ve got coming in to be able to do that.”