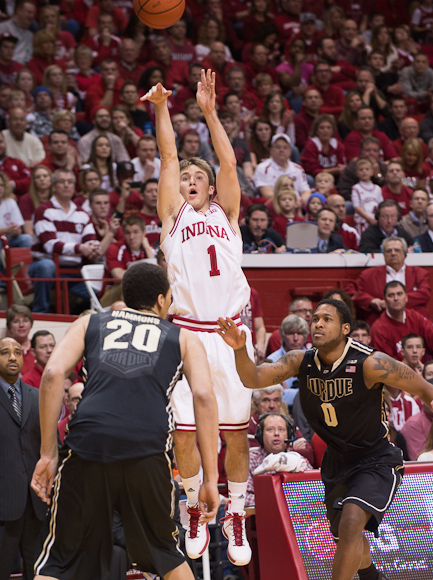 Hulls, who earned his Masters Degree in May and exhausted his NCAA eligibility this past season, is in the process of working out for various NBA teams ahead of this month’s draft. Hulls worked out for the Indiana Pacers on Monday and the Chicago Bulls on Wednesday.

He said he and his agent have three or four more planned for the coming weeks, though he’s not sure when and where those will take place.

“I’m just doing as many workouts as I can and see what happens with that,” Hulls told Inside the Hall on Thursday. “The plan is to try to get on a summer league team. If I’m fortunate enough to have that happen, that would be great. Make a roster, awesome, I get to stay here. But if not, I’ll go overseas and play and make some money that way. Playing basketball is not too bad of a gig in my mind.”

In his interview with Inside the Hall, Hulls also talked about the way last season ended for he and the Hoosiers. Hulls injured his right shoulder in a third round win against Temple, and he struggled in his last collegiate game against Syracuse in the Sweet Sixteen.

Hulls was held scoreless on 0-of-6 shooting in a 61-50 loss to the Orange, and he was frustrated and disappointed afterward about the way he went out.

On March 30, Inside the Hall reported that Hulls played through a level 1 AC shoulder separation against Syracuse. Speaking about the injury for the first time since the season ended, Hulls admitted he wasn’t nearly himself after the injury.

“It hurt quite a bit,” Hulls said. “In the Temple game, it didn’t hurt as bad because I got a lot of adrenaline going. The doctors gave me some stuff to help ease the pain. I was just trying to do my best, and it didn’t hurt too bad until I dove on the floor in the Temple game after I already hurt it. That kind of messed it up a little bit.

“The Syracuse game, it was hurting me pretty much all week. I tried to rest it as much as possible. I could shoot the ball, obviously not as well as I wanted to. But once I got in the game and started having to defend guys, it was a little bit of a different story. It was hard for me to put a lot of pressure on it, getting caught in screens and stuff like that. It was hurting quite a bit, but it was gonna have to be a lot worse than that to keep me out of my last possible game.”

Hulls returned to the floor and was a key reason why Indiana came from behind to beat Temple. He played 26 minutes against the Orange.