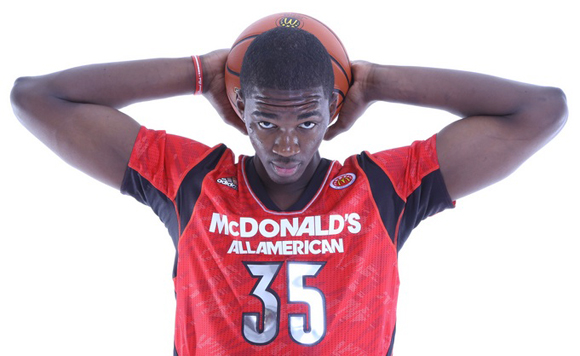 CHICAGO — 2013 IU signee Noah Vonleh touched on a range of topics at McDonald’s All-American media day this afternoon at the United Center.

What follows is an edited interview with the versatile, five-star forward during a one-on-one session with Inside the Hall.

On his role next season at IU: “Coach Crean talked to me a little bit. Me and Troy Williams will probably end up being a couple of the main scoring options because they’re losing Victor (Oladipo), Christian Watford, Jordan Hulls and possibly Cody Zeller. So they’re going to need people to come in and score and be ready to go to war.”

On his schedule after the Jordan Brand game and Nike Hoop Summit and before he heads to Indiana: “I’ll just be in the gym, trying to finish school off strong. I’ll be lifting because Indiana sent me a plan. Just working on my skills, trying to get better, and then I’ll be up in Bloomington the second week of June. (The weight-lifting plan) is some upper body one day, lower body the next day. I think they’ll send up a workout soon for strength and conditioning.”

On what he’s looking to improve upon before his freshman season with IU: “Being ready to compete. I’m going to be playing against guys faster and stronger than me. So I got to be ready to get faster, be ready to defend guys bigger than me.”

On New Hampton’s 17-13 season and what he learned from it: “It wasn’t the best year. I think we could have done a lot better. I think I should have been more aggressive this year, stepped up more as a leader.”

His thoughts on IU’s finish to the season: “It was disappointing, I had them winning the whole thing. They struggled with (Syracuse’s) length. They hadn’t seen that really much all year so it was tough for them. I’m happy for Victor. He had a great season. He’s about to go to the NBA. Cody Zeller, he might potentially leave. But if he comes back, we’ll be a pretty good team next year.”

On who he’s talking to: “I talk to Kenny (Johnson), Crean, coach (Tim) Buckley a little bit. I talk to Troy sometimes. Stan sometimes. (Kenny) checks in on how I’m doing. Seeing what I’m thinking mentally, if I’m ready for next year.”