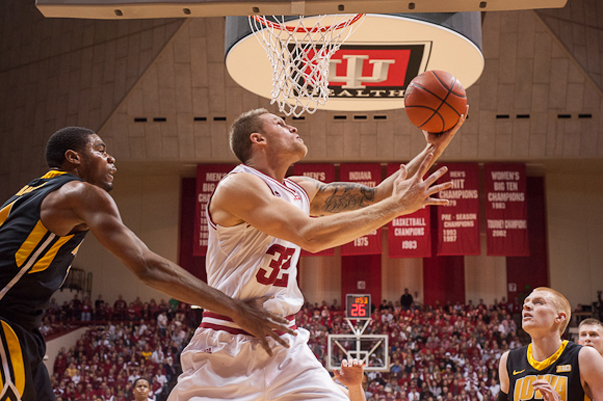 The value of personality

You don’t have to spend much time around Elston to perceive that he’s a little, well, different. He’s got an complex series of tattoos on his left arm that he’s continued to add on to over the years, but leaves his right arm clean because his mom hates tattoos. He likes to tell jokes, play pranks and act goofy, one of the primary reasons Elston didn’t always get along with Crean at first.

“He’s got the equal gift of being funny, but also being able to laugh when people laugh at him,” Crean said. “His humor, I don’t get to see it the way I used to. Maybe he’s backed off all the impressions he has. I’m sure he has mine down, but there’s no way I’ll see that anytime soon. He’s a hilarious young man who has grown leaps and bounds.

“There’s nobody that was harder and poked more fun at Cody [Zeller] early on, which really brought Cody into the group. It was priceless to have some of those pregame meals last year and just sit and listen to Derek get after Cody. And what was so great was Cody laughed louder than anybody.”

So what’s it like to hang out with Elston off the court? Watford said there were too many stories to narrow to just one. Hulls, Elston’s roommate of three years, gave a more concrete example.

“When we hang around, just around the apartment, we’re trying to pass time, we’ll just mess with Austin [Etherington] or Remy [Abell] or something like that,” Hulls said. “Derek’s a health freak, so he fills up his gallon of water. We’re just chilling in Austin’s room, and he just decides to pour his gallon of water all over Austin’s carpet when Austin leaves the room, so Austin, with just socks on, has to walk through the water. Just stupid stuff like that, just unnecessary, you don’t need to do it, but it’s really funny.”

Elston’s personality was especially valuable to the team during the first two years of struggles when there was rarely anything to smile about. But his light-hearted nature should not be undervalued this year, either. The Hoosiers went from the hunters to the hunted, and suddenly all the pressure has been on them this season.

It’s taken a lot of things to get the Indiana program back to the top, but Elston’s personality may be one of them. During his first two years on campus, everybody was making jokes about the state of the team. Now, all the laughing is coming from inside the locker room.

“I love the fact that it was so hard for us in the beginning, not really getting anything, not only here, but with the league,” Elston said. “I felt like the league just didn’t like us. They liked the fact that we were down. And then all of a sudden we just click in the last two years that I was here. You look at videos of the past, and you see how bad it was and how everybody was kind of making fun of us. We were the butt of every joke. And now, we’re playing so well.”