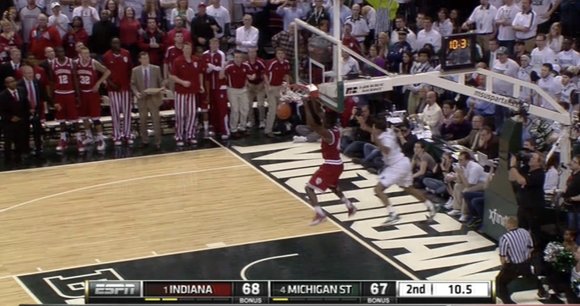 Thoughts on a 72-68 win against the Spartans:

Somewhere between the non-calls, the joke calls, the clock not running on two separate occasions and all the official reviews — which set a strange tone, especially in the second half — Indiana found a way to steel itself inside the Breslin Center when it seemed to be slipping away and emerge victorious in East Lansing for the first time in a long 22 years, a long 17 games.

Indiana maintained control in the belly of this game. Save for a one-point lead the Spartans held for less than a minute around the 13:00 mark of the second half, Indiana led from the 14:42 mark of the first half until the 6:30 mark of the second half — about 28.5 minutes of advantage. But the lead never reached double digits, never stretched over eight points, and as the clock pushed into winning time, the Spartans and Hoosiers would trade leads. It would continue to bounce back and forth until Derrick Nix, who had run his mouth about his team not getting enough respect, about some of these Hoosiers not being as great as they have been billed to be, hit a layup with just over three minutes to go and then another at 2:37 to put the Spartans up three. A Gary Harris split at the line made for a 67-63 Spartan advantage with only 1:37 left, and the Hoosiers would have to dig deep, get stops and put the ball in the basket if they were to make it out of the Izzone’s wrath with the W.

Christian Watford, the so-called x-factor, who struggled at times in this one (an airballed 3-pointer, missing the front two of three at the line, that shiver to the face of Adreian Payne, whether intentional or not, that resulted in two fouls on him), hit a shot as he came across the lane and drew contact from Payne, resulting in a foul call. It was not the most glamorous shot. Not the most pretty. But it went in. And for a team that has ended up on the wrong side of big baskets in the final moments of games this season, it was time for the scales to tip and for them to get one of their own. This time, he would hit his free throw.

And the Hoosiers would go to work on D. Cody Zeller, after needlessly fouling Keith Appling on a hedge, which resulted in a missed front end of a 1-and-1 by the point guard in another game he failed to show (1-of-8, six points), would thwart an attempt by Nix to make a move on him and get anywhere near the lane on the next possession. And as Watford came over to double Nix, and he couldn’t find the open man for a bit, all the Spartans could do was call for timeout. Zeller got switched onto Harris on the ensuing inbounds, and as he drove to the rim, there was — who else? — Victor Oladipo coming over on help D to meet him and make sure the ball would not go through the rim.

And of course it was Oladipo, who continues to draw comparisons to stars like Michael Jordan and Dwyane Wade, making plays on the other end of the court for Indiana in the final minute: A tip-in of a Yogi Ferrell miss to give the Hoosiers back the lead (68-67), a sneaky escape on an inbounds for a breakaway dunk to put Indiana up three, and two free throws at the end to seal it. Six points in 43 seconds and another feather in a cap that’s growing fuller of them by the game. Oladipo finished this one with 19 points (7-of-11), nine rebounds and five steals, and what can’t this man do on the basketball court?

Indiana did not pump in its best offensive effort of the season (1.03 points per possession, 43.3 percent from the floor), and it would attempt eight fewer free throws than the Spartans (23 to 15). But it held onto the ball better than usual in Big Ten play (14.3 turnover percentage) and held the Spartans to just fewer points on a per possession basis (1.00), and it would be enough for the victory. The Hoosiers showed an unmistakable maturity and poise in this one, and it will serve them well as March nears.

First place outright in the Big Ten. No. 1 in the nation. These are your Indiana Hoosiers.