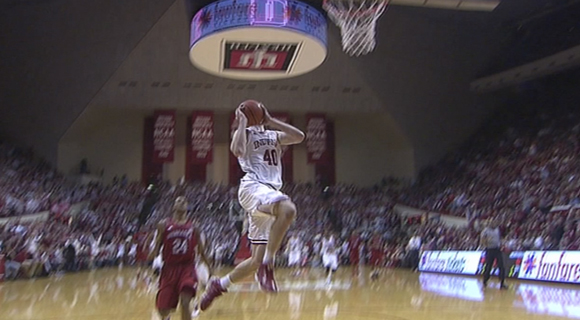 Thoughts on a 76-47 win against the Cornhuskers:

Sometimes, it just happens. You throw everything into an effort like the Hoosiers did against Ohio State on Sunday, and then you head home for a game against a Big Ten bottom feeder and the crowd is late to arrive and quiet, and you just come out flat. And so this was Indiana to start the evening: Playing down to the competition. Save for an early 2-0 lead, the Hoosiers trailed the Cornhuskers of all teams until the the 8:06 mark in the first half, as a Yogi Ferrell 3-pointer put the Hoosiers up 16-14 — a lead they would continue to build throughout the duration. But truth be told: The first 20 minutes of tonight’s contest might go down as Indiana’s worst offensive half of the season. The Hoosiers scored a season-low 27 points. They shot just 31.6 percent from the field and just 28.6 percent from distance. Nebraska made more field goals (7) than the Hoosiers (6).

Indiana’s saving grace from the first 20 minutes was its ability to get to the line. Nebraska doesn’t have the talent or athletes to match the Hoosiers, and it showed. Indiana again went to Cody Zeller at the onset and he quickly got the likes of Brandon Ubel and Andre Almeida into foul trouble. The Cornhusker big men would end the half with three fouls apiece and Indiana scored nearly half (13-of-18) of its 27 first half points at the charity stripe. Nebraska also did an alright job of dictating tempo; the Hoosiers scored zero points on the break heading in the locker room.

But the second half would tell a different tale and it started like this on IU’s first three possessions: A Victor Oladipo putback after a Zeller miss, a Jordan Hulls 3-pointer, a Christian Watford dunk. And the hits would continue to come. Zeller had been riddled by some foul trouble himself, but he got in an offensive groove in the second half, scoring in the post and even getting a steal on a hedge for a breakaway dunk. After just three first half points, Zeller would finish the night with 16 points in 18 minutes on an 8-of-11 performance at the line. He led the team in scoring, though Indiana got its usual balanced attack. Christian Watford finished the evening with a double-double (13 points, 11 rebounds). Oladipo had 13 of his own. Will Sheehey added nine and Hulls, eight.

And Remy Abell, who started the season so hot and went cold and maybe lost a little confidence along the way, had a decent little night. He splashed a corner 3-pointer — his first from distance since Jan. 7 — and got a steal, breakaway layup and hit the free throw to complete a 3-point play late to finish the evening with six points. By game’s end, the Hoosiers had done much better from distance (50 percent, 8-of-16), finished the night a respectable 45.8 percent from the field and scored a healthy 1.32 points per possession. They were also strong once more from the line (24-of-29, 82.8 percent).  Indiana’s 49 second half points also bested Nebraska’s 47 for the game. Yikes.

It was all a return to form after a forgettable first half and often felt like an IU home non-conference game: Not the most complete 40 minutes by any stretch, not the loudest and proudest Assembly Hall faithful performance, but a comfortable ‘W’ all the same.