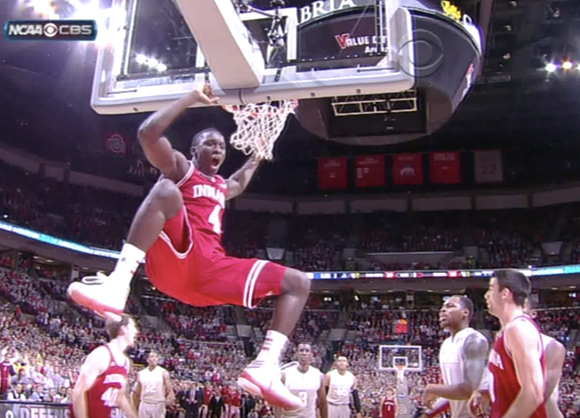 Backs against the wall after Thursday’s slipup in Champaign, and the Hoosiers put it together for a full 40 in Columbus. There would be no building of a lead only to see it wilt away. There would be no nitpicking about Indiana still missing a quality road win on the resume after this one. The critics have been silenced, and maybe Indiana’s No. 1 ranking is here to stay.

We whine about Cody Zeller not getting enough touches, whine about his teammates not looking for him and him not looking for the ball, but not today. Zeller was aggressive from the opening tip and went after Amir Williams time and again, getting him into foul trouble (four) and forcing Thad Matta to play his reserves more with Williams only logging 11 minutes. Zeller not only was doing things on both blocks — the hook in the lane, the turn to the baseline stepback jumper — but he hit a crucial 17-footer from the baseline in the second half after a Christian Watford offensive rebound kept the possession for Indiana, making sure Ohio State wouldn’t get back in this one. And because he was being so aggressive, Zeller got to the line a ton and converted (8-of-11). He finished the afternoon with 24 points (8-of-11 shooting), eight rebounds and a block.

But Indiana would also get huge offensive contributions from Victor Oladipo (career-high 26 points, 8-of-10 from the field, 9-of-10 from the line) and Christian Watford (20 points). Oladipo scored from all areas of the floor (beyond the arc, at the rim and in the mid-range) and just continues to shine as one of the elite players in all of college basketball. At one point in the first, Oladipo caught an oop from Jordan Hulls and scored it on the other side of the rim. He followed that up with an offensive rebound where he knifed down the lane and dunked it home with authority.

Watford hit some huge 3-pointers including one the Indiana possession before Zeller’s aforementioned jumper which kept the Buckeyes at bay. The normally even-keeled Watford also showed a rare bit of fire late, slamming the ball to the ground after a late LaQuinton Ross foul ended up with Ross slapping down for the ball and catching Watford across the face.

Three strong individual performances for the Hoosiers, but perhaps most impressive was the collective effort in the halfcourt. Like we saw against the Illini on Thursday, the Hoosiers didn’t get much of anything going in transition — just eight fastbreak points this afternoon — and so they’d have to make their mark in the halfcourt against the 11th best defense in terms of adjusted defensive efficiency, per Ken Pom. And that they did. Sometimes it was the sharing of the ball and the bleeding of the shot clock until the Hoosiers found a good shot. Other times — as Clark Kellogg described it — the Hoosiers went smashmouth, getting Zeller the ball and letting him go to work. He would either find the contact and get to the line or convert the basket.

The Hoosiers scored 1.28 points per possession with little transition work against this stout Ohio State defense with a supreme on-ball defender in Aaron Craft and length just about everywhere else. They also limited their turnovers (just eight) this afternoon, another positive in a category the Hoosiers have struggled with for much of conference play.

Indiana’s defense held the Buckeyes to just .98 points per possession and it was rare Ohio State would string together a few possessions where they were scoring on each. It took Deshaun Thomas 20 shots to score his 26 points — several of which were contested long 2s, the most inefficient shot on the floor. The Hoosiers simply didn’t make it easy for the Buckeyes most of the afternoon and their shooting numbers are proof. They shot just 42.4 percent from the floor and 23.1 percent from the 3-point line.

It all amounted to Indiana’s first win against a Top 10 team on the road since 2000, a statement victory in the face of criticism and a possibly retained No. 1 ranking. Sunday afternoon in Columbus, and the Hoosiers redeemed.