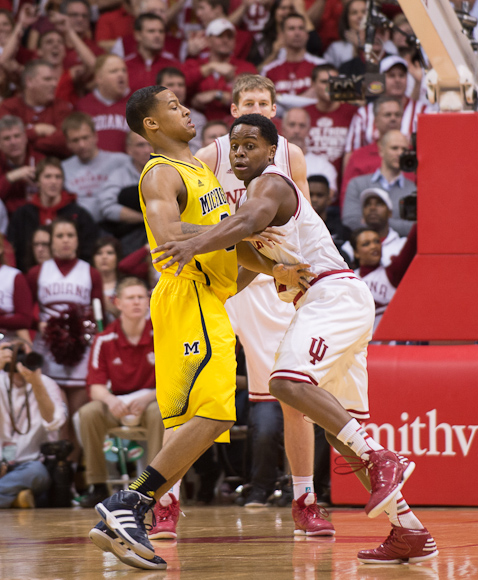 Like it did last year, Indiana took down No. 1 at Assembly Hall on Saturday night. Only this time, no court storming was necessary.

While it will go down as an upset by the rankings, these are the kinds of games the Hoosiers are expected to win these days. That’s a credit to Tom Crean, who has rebuilt this thing from nothing.

“Indiana is a heck of a team,” star Michigan guard Trey Burke said. “I’m glad we got an opportunity to play them tonight.”

I’ve been critical of Crean in the past for his occasional failure to make adjustments (See: Wisconsin), but he came up with a masterful game plan against the Wolverines. He figured Burke would get his, but Crean devised a defensive game plan to keep any other player from going off.

The Hoosiers almost completely took freshmen Nik Stauskas and Glenn Robinson III out of the game, holding them to a combined 12 points on 4-of-16 shooting.

“They were locking down on Glenn and Nik, not letting them get the ball, and then putting good pressure on us,” said Michigan coach John Beilein.

Added Burke: “They kind of made us win the game just from the point guard and the center position. Indiana did a good job of denying them. It was tough getting them the ball.”

This is not the same team that so often won games because of its ability to outscore teams. With Victor Oladipo and Yogi Ferrell leading the charge, this Indiana team now prides itself on its defense.

When shots stopped falling as they occasionally did Saturday night, the Hoosiers’ defense kept a Michigan team full of offensive firepower from claiming the lead.

“We felt that the Indiana defense they saw last year was what they remembered,” Crean said, “and we wanted to give them something different because we did not guard them as well as we should have a year ago. We really wanted to prove to ourselves tonight that we were a much better defensive team against a team that’s that good.”

That defense is a big reason why wins like the one we saw Saturday night aren’t a surprise anymore. Indiana could put up the points last year, too. Its season ended in the Sweet 16 because it couldn’t stop Kentucky from scoring.

Saturday was a different story. Oladipo proved once again that he’s the nation’s best defender. He allowed only four points all night while guarding four different players, according to ESPN’s Jay Bilas. And one of those four players was Burke, who went for 25 points.

“I’ve seen a lot of players, and I don’t know if I’ve seen one quicker, faster and more athletic than Oladipo,” Beilein said.

Christian Watford, as he often does in big games, turned in a huge effort. He had 14 points and 10 rebounds, including nine big defensive boards.

Ferrell spent most of the game on Burke, and did an admirable job wearing him down. And Jeremy Hollowell, who continues to play better and earn more playing time as a result, was terrific in his time on the court. He had four points, four rebounds and three blocked shots in 10 minutes of action, and completely outplayed his freshman counterpart, Robinson III.

“Jeremy is really gaining confidence because he’s spending so much extra time outside of practice on his game,” Crean said. “Instead of sitting there and feeling sorry for himself, he became one of those guys that’s in the gym in the morning or in the gym at night along with his practice time.”

Last year, Indiana shocked the nation when it beat No. 1 Kentucky. This year, beating No. 1 Michigan is just a small accomplishment on the path to the ultimate goal.

“I hope when we meet at the end of the season,” Crean said, “we’re all playing for something really big.”