Victor Oladipo’s steals. Michigan State’s jumping of the outlet pass, its ability to exploit Indiana’s zone on the backline and with inside-out play for 3-pointers. Cody Zeller’s huge drive to seal the victory.

A look at the biggest storylines from Sunday’s win against the Spartans in the latest edition of Film Session:

I. AN OUTLET JUMP, AN MSU INSIDE-OUT 3 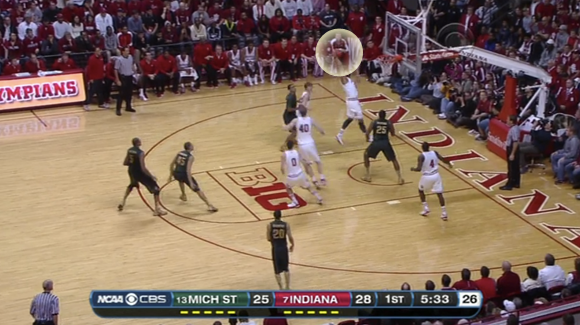 He instinctually turns around and throw an outlet pass to Oladipo. But with everyone else hustling back down the court, Travis Trice is pouncing on the pass: 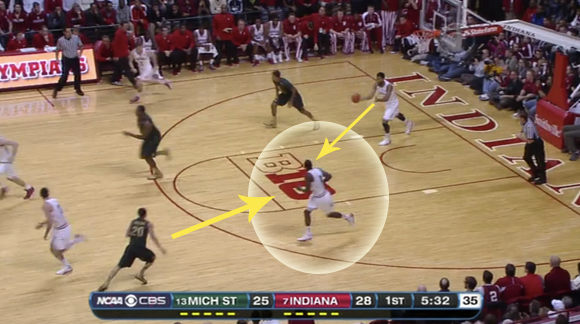 He intercepts it with Oladipo helplessly still heading the other way: 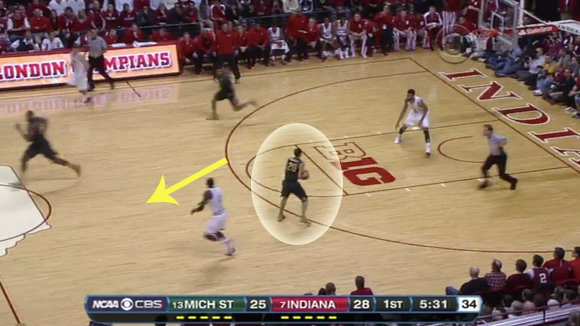 Trice ended up missing a jumper, but the ball went out of bounds on Watford and the Spartans set up in the halfcourt. Here we see a triangle on the strong side with Trice in the corner, Derrick Nix on the right block and Denzel Valentine on the right wing: 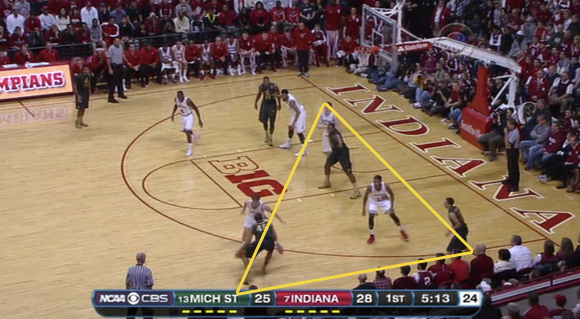 Valentine throws an entry pass into Nix, and both Jordan Hulls and Yogi Ferrell sink down: 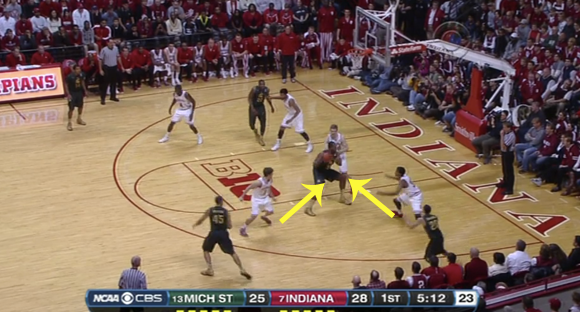 This frees Trice beyond the arc and Nix quickly passes back out: 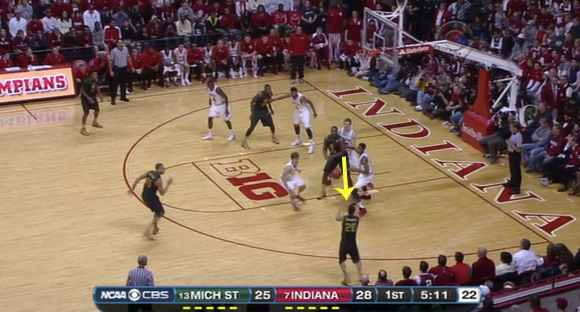 The 3-pointer falls and Michigan State ties the game: 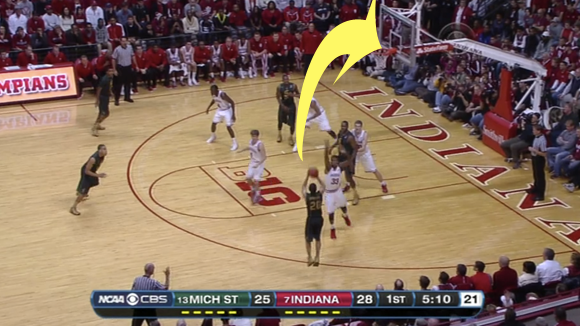 Said Watford after the game: “They were trying to jump it, they were definitely trying to stop us from getting our break going. They knew we like to take the ball out pretty fast. They knew we were kind of throwing it without looking and jumping the pass. So we just had to slow it down and wait for the guard to come back to the ball.”

Off a Payne made jumper, Watford first looks right for the inbounds, as Branden Dawson is already making a move on Ferrell: 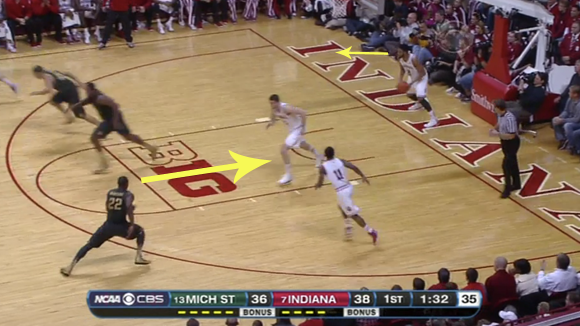 As Watford turns and sees this unfolding, his momentum is carrying him forward as he holds back on the pass: 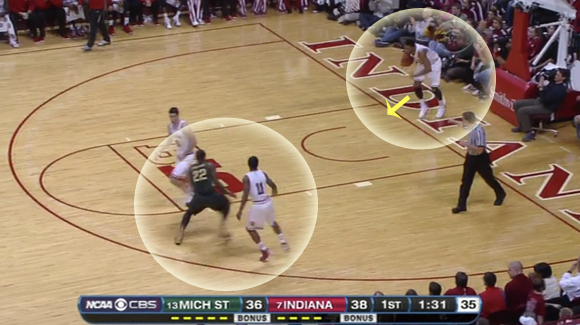 Watford commits a violation as he steps on the endline; Dawson sees it and points it out: 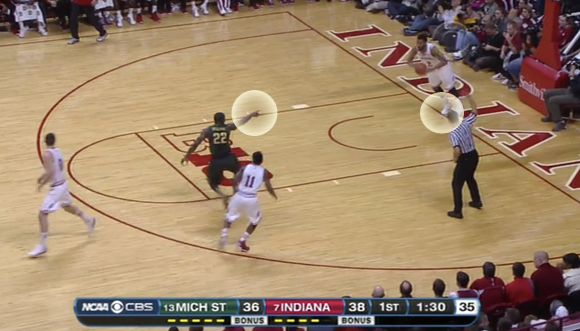 So it’s MSU’s ball. Watford is down on the right block keeping a body on Payne: 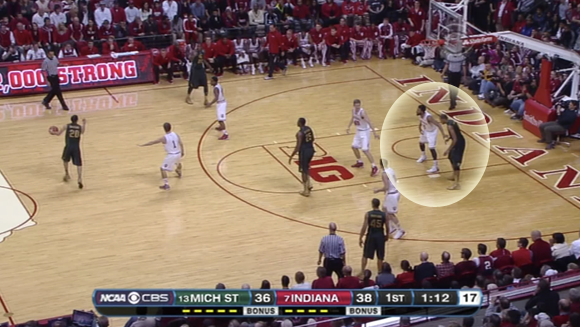 But as Trice gets a pick from Nix up top, Watford has floated out to cover Dawson on the wing. With Watford gone and Zeller looking at the action up top, Payne calls for an alley-oop, as there’s no one paying attention to him: 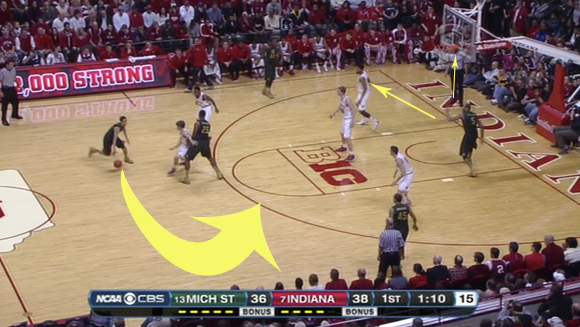 He receives it from Trice: 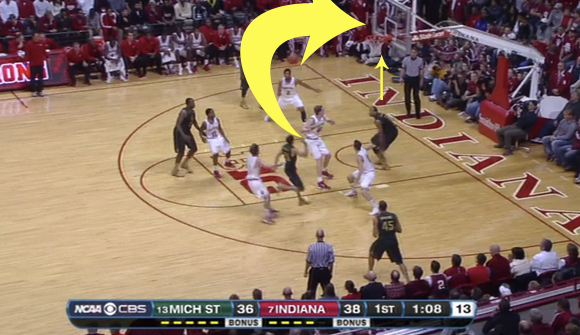 As the Hoosiers’ backline can only look up and see it unfolding: 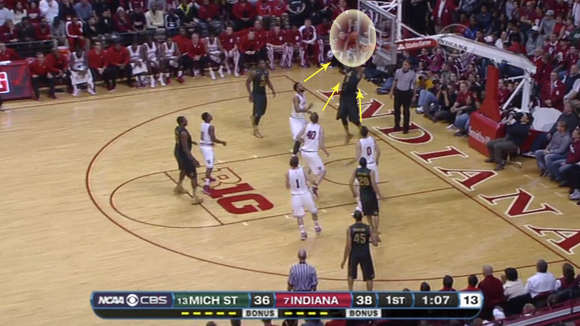 Said Tom Crean after the game: “They got a couple of lobs in the first half where (Zeller) wasn’t as aware of where his teammates were as he needed to be.”

Ferrell has Trice marked way out near halfourt as Oladipo is face-guarding Gary Harris down on the baseline: 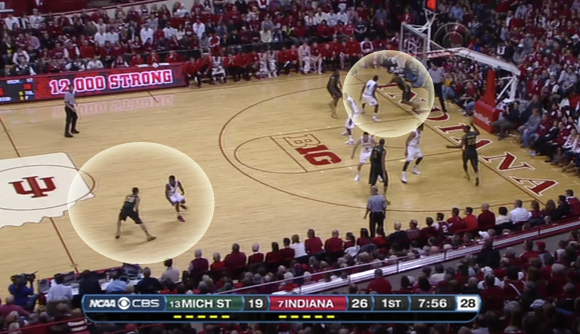 As Trice comes left, Harris gets a pick from Nix: 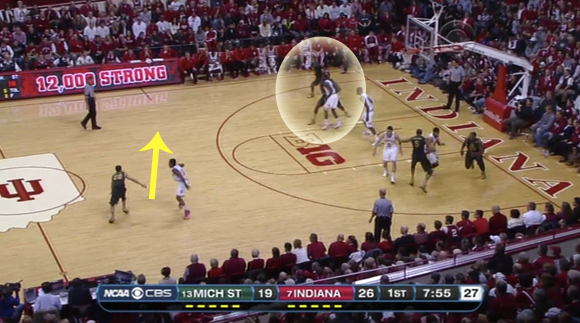 But Oladipo fights through it, matches Harris stride for stride and gets the one-handed steal: 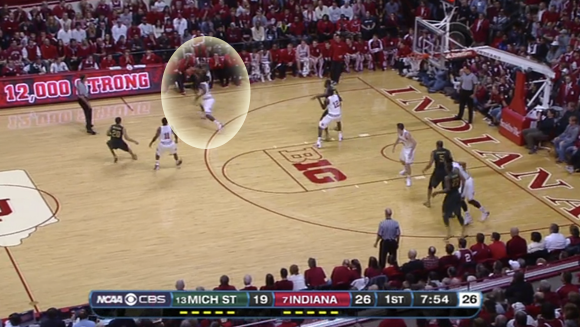 It’s a pass to Ferrell on the run: 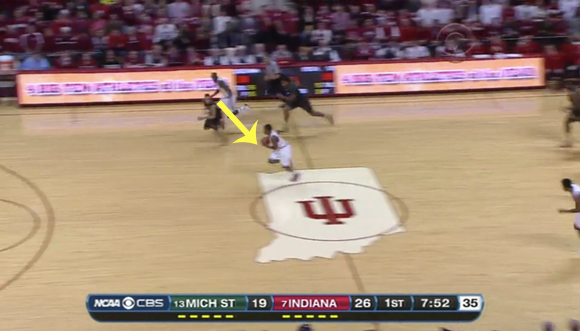 And he lays it in for two: 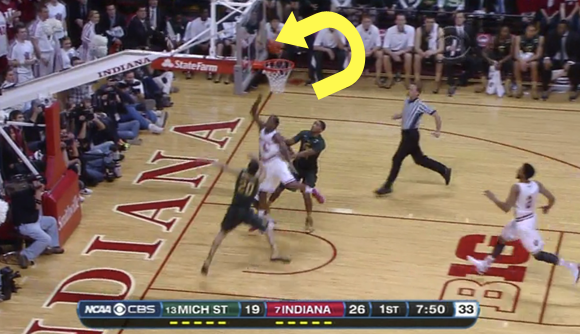 Said Oladipo after the game: “Transition is a big deal on our team and for me to get those steals and start our beak was huge for us. My guys did a great job of playing defense and running on the break … As the game develops, you just read the passer’s eyes and blast the gaps.”

Indiana’s offense resets up top as Crean calls out a play: 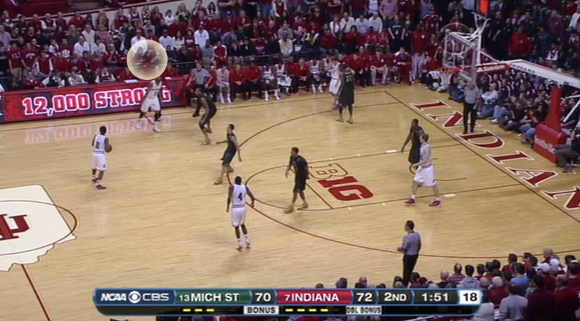 Ferrell hands the ball off to Zeller: 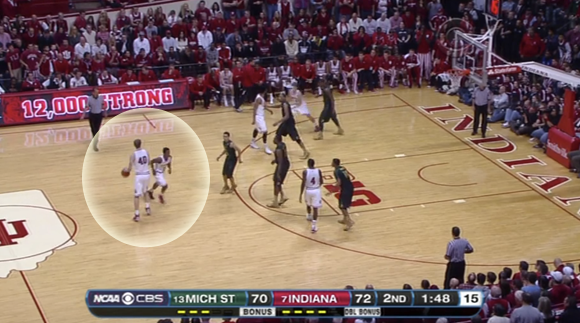 As he passes it over to Hulls on the left wing, we see a line of IU and MSU players out near the perimeter: 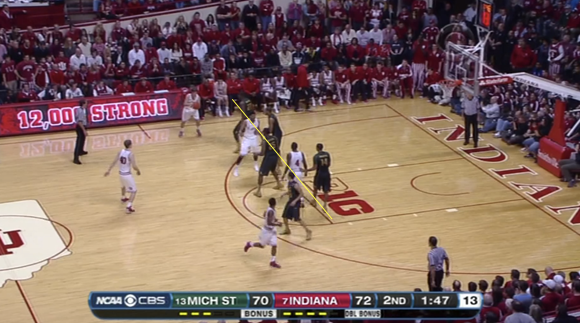 As Zeller gets it back up top, Indiana has spread out. Here’s where the action really begins. Oladipo darts up: 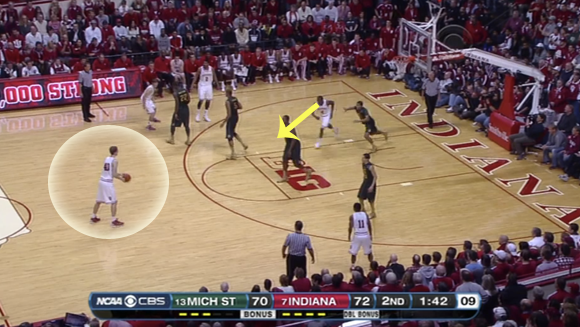 And sets a pick on Nix. This gives Zeller a lane to the rim: 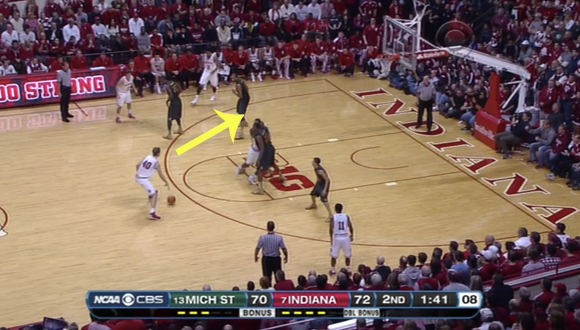 He takes it strong: 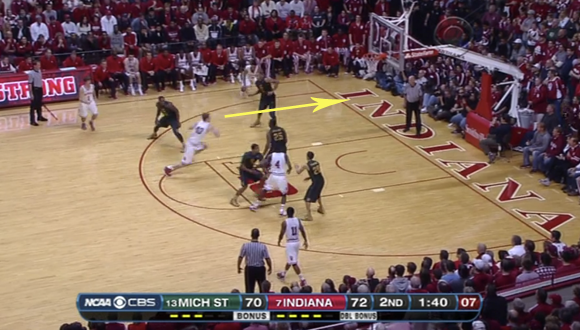 With Nix just not quick enough to recover and get a body in front and Payne not coming hard or quick enough off the wing, either, Zeller is able to get a good look he converts on: 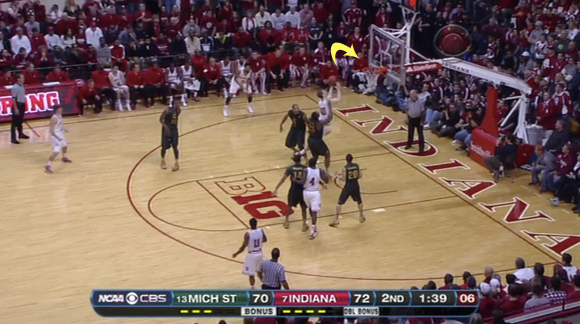 Said Crean after the game: ” I had no hesitation with that call. We didn’t call it out of the timeout. I had it in the bag and it looked good because he ran it to perfection. The other guys were all in movement as well. He continues to improve.”