No secret here: Once the Golden Gophers turned up the full-court pressure on the Hoosiers after halftime on Saturday afternoon inside Assembly Hall, their length and athleticism caused some problems. Yet, Minnesota actually never recorded an immediate, quick score after turning Indiana over before the timeline in the press; it was Indiana’s unraveling in halfcourt defense after its deadball turnovers that allowed Minnesota to capitalize and score.

A look at four such scores from the Golden Gophers in the latest edition of Film Session:

I. Indiana inbounds the ball and Jordan Hulls finds an open Christian Watford: 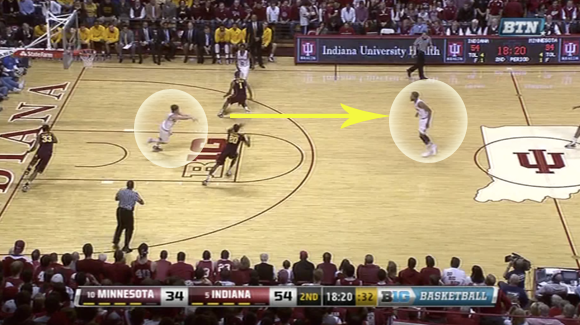 But Joe Coleman adeptly steps up, plants his feet and draws the charge on Watford who doesn’t turn and see him until it’s too late. Turnover Hoosiers: 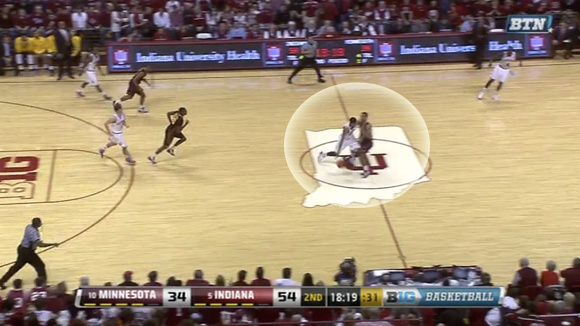 After Minnesota inbounds the ball, the Golden Gophers set up with one player in each corner. With two others near free throw line, Indiana has four defenders in a row in between: 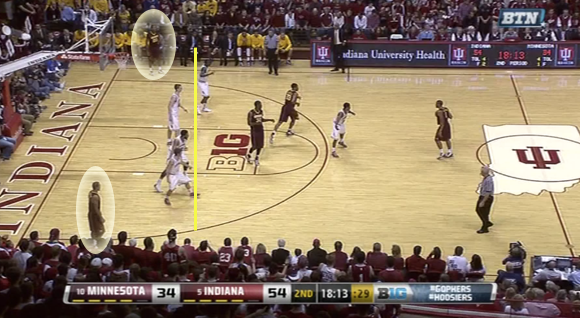 Watford pointed for Hulls to step up and take another Minnesota player, as he now has Coleman on the weakside. But Hulls never seriously commits and he’s left guarding no one at the top of the key. This creates some imbalance when Minnesota swings the ball to the right wing. Victor Oladipo is left covering Andre Hollins and Austin Hollins, as the Hoosiers only have two defenders near the action on the strong side: 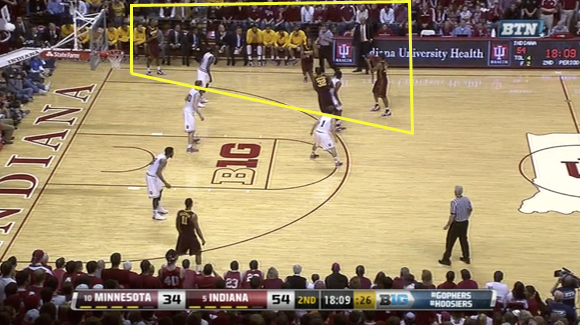 Oladipo comes to meet Andre when he gets the ball. But it’s just a quick pass to the open Austin: 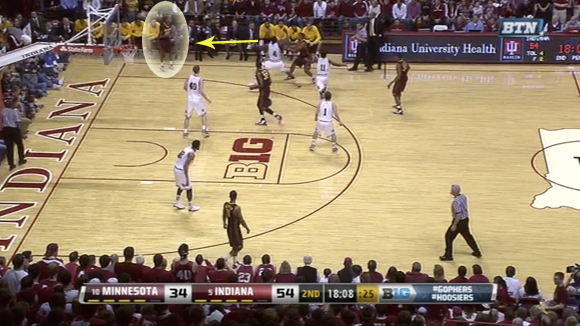 Who drains the 3-pointer: 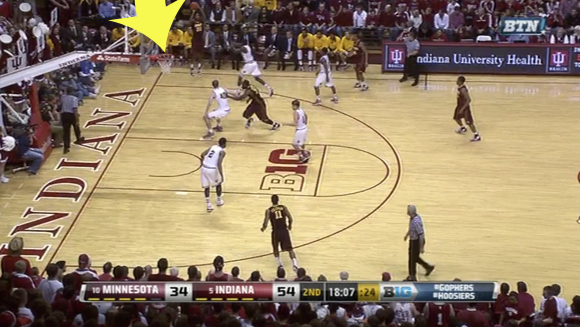 II. Remy Abell looks to inbound the ball, but with Will Sheehey stepping in front of Yogi Ferrell, he double clutches and ends up stepping over the baseline, causing an IU turnover: 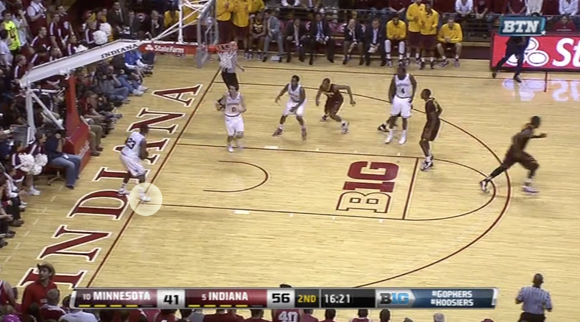 Indiana starts out this defensive possession with all five players marked on a Minnesota player: 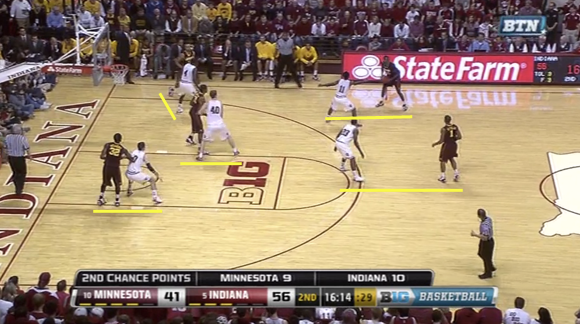 But as the ball swings left, we again start to see an imbalance: 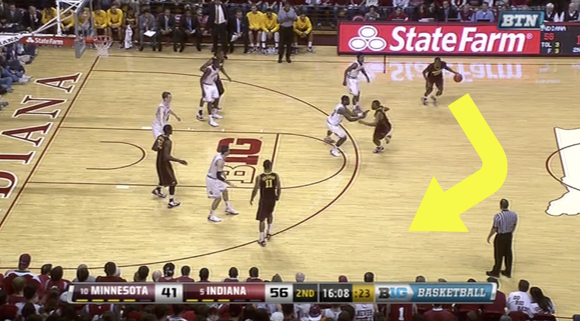 Coleman, whom Sheehey had been marking, comes up to set a pick on Abell, who was guarding Andre Hollins: 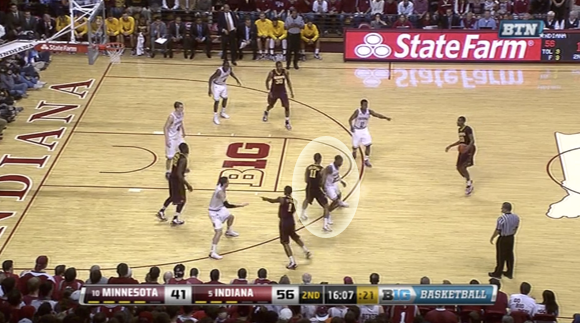 Sheehey stays with Hollins, which allows Coleman to sneak into the middle quickly off the Abell pick: 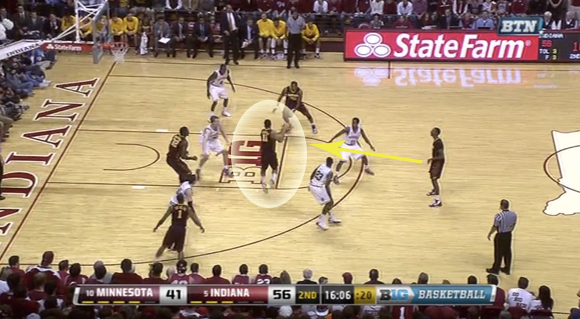 Zeller does come up to meet Hollins — leaving Trevor Mbwake open — but he never gets off his feet, which allows Coleman an easier look that he converts: 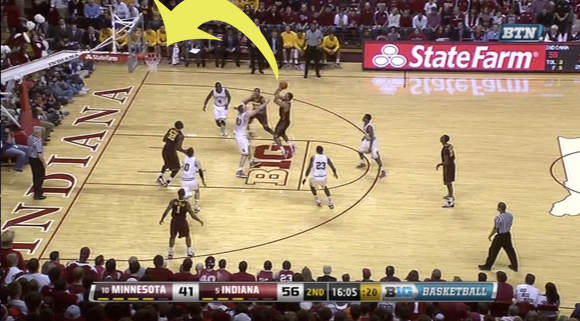 III. With 55 ticks to go and Minnesota still down 10 Hulls frees himself: 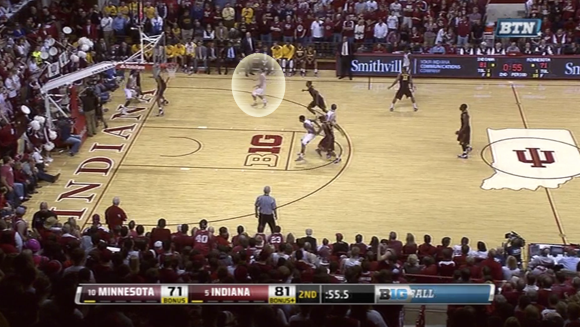 But he’s quickly met by two Minnesota defenders. And with the sideline acting as a third defender, Hulls dribbles the ball off himself and out of bounds. Turnover IU: 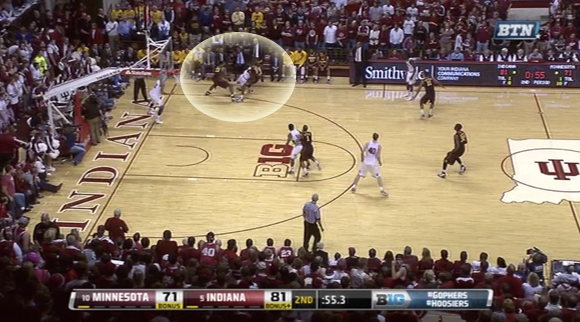 Minnesota inbounds the ball from that spot. Oladipo, who was guarding the inbounder Andre Hollins, slides down to Coleman and helps Ferrell: 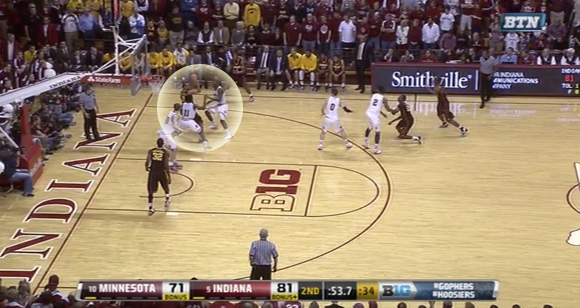 Oladipo pops out to the wing a split second before Coleman passes back to Hollins, as he’s anticipating he’ll be there. But Hollins is actually in the corner. This has Oladipo’s momentum heading the wrong way: 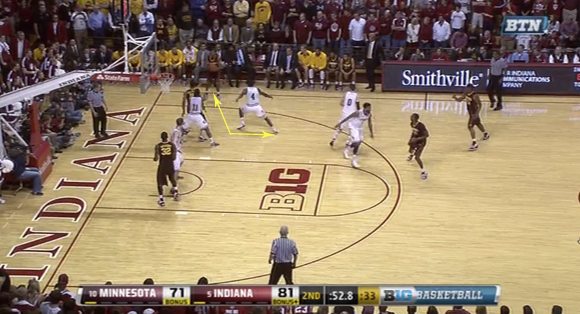 He can only contest from the side, allowing Hollins a strong look which he hits, bringing the lead down to seven: 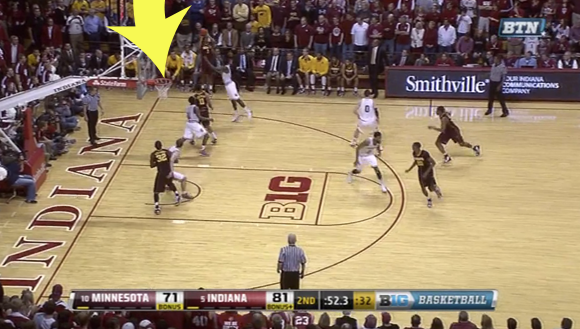 IV. Here Ferrell gets open in a similar spot to Hulls. But Watford throws a pass too far away from him and it goes directly out of bounds: 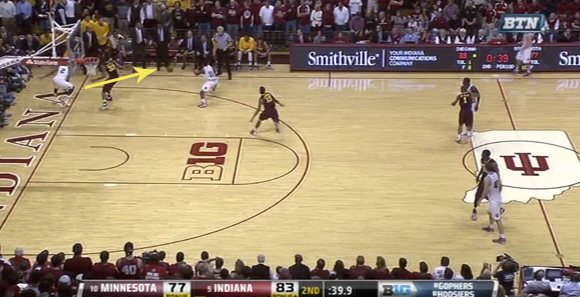 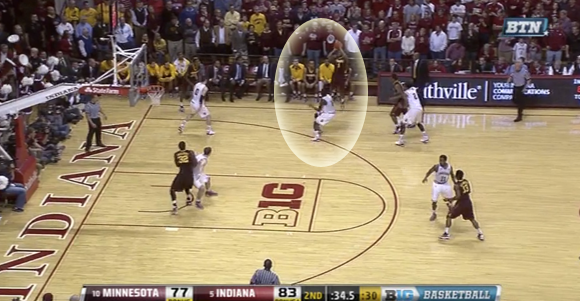 But Mbwake has position on Zeller and Zeller gives him a push in order to grab the rebound. Zeller is called for a foul and Mbwake hits both shots at the line, making it just a four-point ballgame with about 30 seconds left: 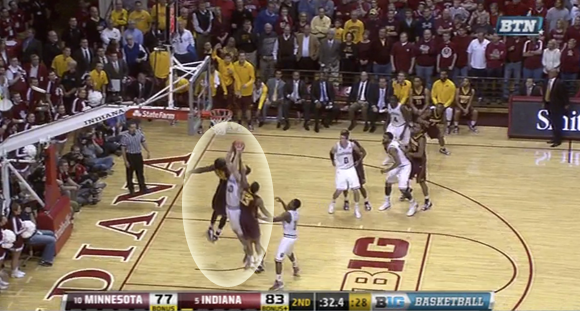