Early in the second half of Indiana’s 87-51 win over Coppin State, the Hoosiers went to a 1-2-2 trap on defense. But it’s when Tom Crean subbed out Yogi Ferrell — who had been playing the “1” at the top of the trap — at the 15:58 mark that it started to really pay off. Victor Oladipo shifted into Ferrell’s spot and he was just about everywhere until he was relieved at the 12:16 mark.

Oladipo recorded six deflections (unofficially). The Hoosiers went on a 14-2 run in this timeframe and he scored (six points — a dunk and four free throws) or assisted  (three in total — a lay-up and 3-pointer for Remy Abell, a 3-pointer for Jeremy Hollowell) on all 14 points.

Below: A look at one play from this run, as well as a supercut of a number of his deflections throughout the game in the latest edition of Film Session. 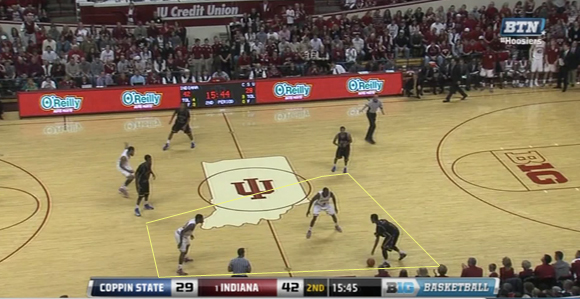 He has two options immediately across the timeline, but with Christian Watford lurking, he opts to make the safer pass in the backcourt:

Vic simply shuffles over and looks to trap on the opposite side of the court with Watford:

Coppin State ends up throwing a rainbow pass down into the corner with Will Sheehey covering:

The Eagles then turn and look up top, which Oladipo sees:

From there, it’s just an outleap of Coppin State for the steal:

One dribble and a pass to Abell: 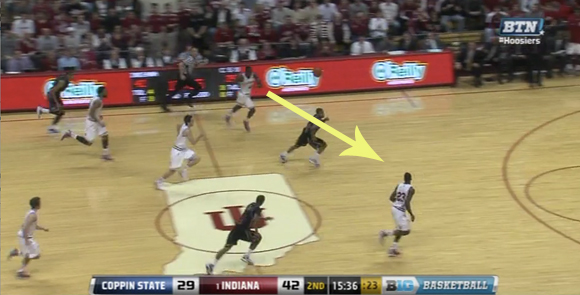 Who lays it in for two: 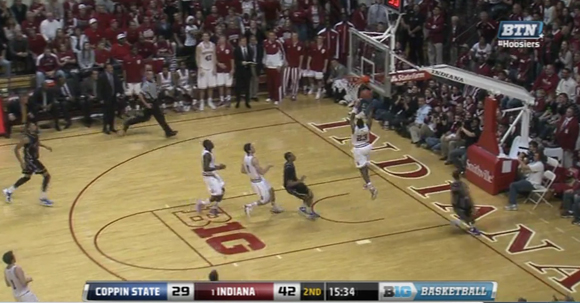 While the staff reportedly charted Oladipo at 20 deflections, below is a supercut of 12 of the most obvious of them. There were a couple plays throughout the game it looked as if it was possible he may have gotten a small hand on the ball, but it wasn’t definitive from the tape. These are not reflected in the video. He also tied-up a Coppin State player where he didn’t knock the ball out; he simply hugged up with him. This may have been charted as a deflection based on the staff’s interpretation of the term.

In any event, this reel still gives a good idea of just how active the DeMatha product was on Saturday evening: